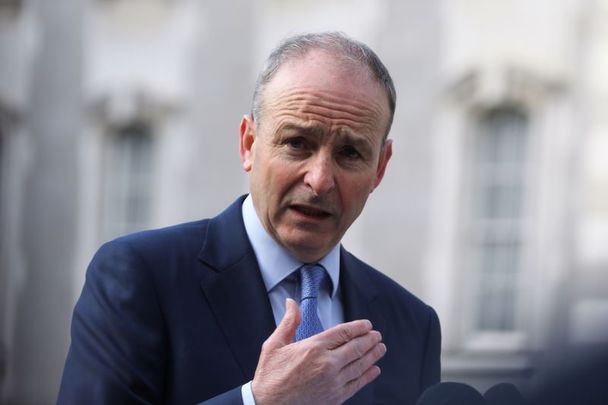 Taoiseach Micheál Martin spoke with Prime Minister of Ukraine Denys Shmyhal on Tuesday and told him that he supports Ukraine being admitted into the European Union.

On Monday night, President of Ukraine Volodymyr Zelenskyy signed documents officially applying for Ukraine to be admitted into the European Union.

The President of Ukraine, Volodymyr Zelensky has just signed a historical document-Ukraine’s application for European Union membership. In addition a joint statement was signed with Ruslan Stephanchuk,the Head of the Parliament,and Denys Shmygal, Prime Minister.Glory to Ukraine! pic.twitter.com/94BZLroH31

“We ask the European Union for Ukraine’s immediate accession via a new special procedure,” President Zelenskyy said on Monday night, according to Politico. “Our goal is to be together with all Europeans and, most importantly, to be on an equal footing. I’m sure it’s fair. I’m sure it’s possible.”

On Tuesday, the Taoiseach said on Twitter that he told Prime Minister Shmyhal "of our strong support for EU enlargement and Ukraine’s application for membership."

The Taoiseach also said that the Prime Minister thanked him for Ireland’s “solidarity, political, economic and humanitarian support in the face of Russian aggression.”

(1) Have just spoken to Prime Minister of #Ukraine Denys Shmyhal.

He thanked Ireland for our solidarity, political, economic and humanitarian support in the face of Russian aggression... pic.twitter.com/tzDDEQyB2h

Prime Minister Shmyhal  said on his Twitter that Ukraine is “grateful” for Ireland’s “constant support and encouragement.” He also said he “raised the importance of recognition of Ukraine for EU membership” during his call with the Taoiseach.

Talked to the 🇮🇪 PM @MichealMartinTD about #Russia war against #Ukraine. Grateful to #Ireland for constant support and encouragement. Raised the importance of recognition of 🇺🇦 for #EU membership.

TD Thomas Byrne, Ireland’s Minister for European Affairs, said he was “so proud” of the Taoiseach vocalizing his support for Ukraine’s admittance into the European Union.