"Taoiseach Micheal Martin said the government has not 'set limits' and 'will provide whatever supports we can.'" 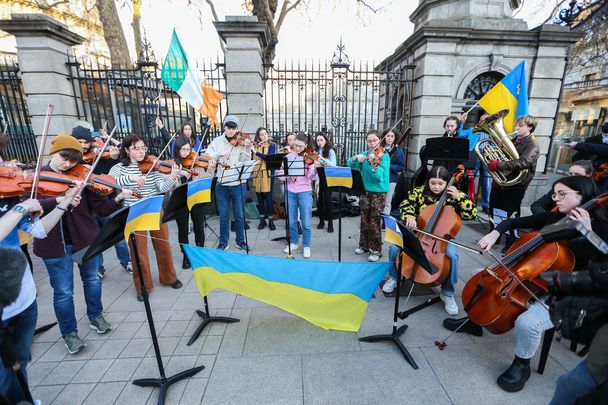 Irish people have grouped in huge numbers to send aid to hundreds of thousands of Ukrainian citizens forced to cross their western border into neighboring eastern European countries. As Foreign Affairs Minister Simon Coveney on Tuesday accused Russia of  “war crimes” in Ukraine, the Irish responded to the enormous courage of the Ukrainians prompted by the amazing bravery of President Volodymyr Zelensky.

President Volodymyr Zelensky has remained among the citizens of Kiev, refusing to leave the capital and demanding ammunition instead of the ride to evacuation offered by U.S. officials.

His defiance of the war imposed by President Vladimir Putin – cowering in his Kremlin bunker – has sparked a mountain of support. Irish-based Ukrainians are flying home to join the defense of their own country and Irish citizens are organizing medical and food aid for refugees arriving in Poland, Moldova, Romania and Hungary.

Among the aid organizers is businessman Alan Gale, who lives in Lucan, Co. Dublin.  He flies with a friend from Latvia and another from Poland to Eastern Poland this Wednesday to hook up with a food and medicine truck which will reach the Ukraine border by Thursday evening.

He said, “Our plan is to set up a food kitchen on the truck and to distribute medicines, water and simple food to the thousands on their way into Poland from Lviv which is 70 kilometers across the border in Ukraine.” Details can be found on Ukrainefoodtruck.com.

Meanwhile, on a political level, the Irish government on Tuesday afternoon tabled a Dail motion expressing support for the “sovereignty and territorial integrity” of Ukraine.

Ministers also discussed details of the €10 million Irish contribution to Ukraine from the EU, which decided over the weekend to send almost half a billion euro in military aid to the beleaguered country, the first time ever the bloc has directly intervened in this manner.  Ireland’s support is to non-military aid.

Ministers also heard a briefing at a Cabinet meeting on Tuesday from Justice Minister Helen McEntee on EU plans for dealing with the growing influx of refugees from Ukraine.

When asked about the numbers of refugees who may come to Ireland, Taoiseach Micheal Martin said the government has not “set limits” and “will provide whatever supports we can.”

He said there will be a structured refugee program and Ireland will “facilitate families” who need to settle and who need “peace and calm.”

European Affairs Minister Thomas Byrne told RTE Radio One that, since visa waivers have been put in place for Ukrainian citizens, the number of refugees who can seek shelter here is limitless.

There has been widespread political and private demand for the expulsion of the Russian ambassador to Ireland, Yury Filatov, who repeatedly claimed that Russia had no plans to invade Ukraine in recent weeks.

Senior government sources did not rule out diplomatic action against Russian embassies but said it would be done in concert with other EU members.

The Irish government has, so far, decided not to expel the ambassador.  Martin said, “On balance we want to retain a capacity to help Irish citizens be it in Russia or be it elsewhere in Ukraine who may need assistance from us urgently. In times of conflict, it is important to keep diplomatic channels open and also to have very fresh and up-to-date insights about what is happening on the ground in given locations.”

McCullagh challenged several incorrect and misleading claims made by Filatov during the six-minute interview.  He labeled the Russian ambassador an “apologist for slaughter.”.

British journalist and presenter Andrew Neil said that McCullagh's interview was an example of  “how you interview a Kremlin apologist.”  CBS correspondent David Begnaud described it as “a devastatingly effective, fair, and fact-based interview.”