Ukrainian President Volodymyr Zelensky gave a historic address to Irish leaders this morning and said Ireland has supported Ukraine despite being a neutral country but urged for more to be done. 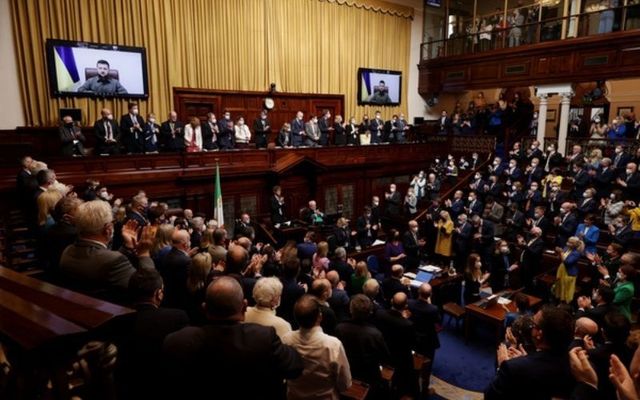 The Ukrainian President spoke to Irish leaders via a video link in an address to a joint sitting of Ireland's Houses of the Oireachtas this morning, April 6.

Ukrainian President Volodymyr Zelensky said since the very first days of the Russian invasion of Ukraine, Ireland had supported Ukraine despite being a neutral country.

TDs, Senators and 45 foreign diplomats gathered in the Dáil in Dublin today to hear the historic address by Mr. Zelensky, whose country has been repelling a Russian invasion for the past six weeks.

"From the very first days, you are supporting Ukraine and this is a fact," Mr. Zelensky said.

"You did not doubt starting helping us, you began doing this right away and although you are a neutral country, you have not remained neutral to the disaster and to the mishaps that Russia has brought to Ukraine."

“I’m grateful to you, to every citizen of Ireland, thank you for supporting sanctions against Russia. Thank you for the humanitarian and financial support extended to our country and thank you for your caring about Ukrainian people who found shelter on your land.”

However, Mr. Zelensky called for more leadership from Ireland. "Just think about it - 10 million Ukrainians have been left without shelter as of today by Russia, who had to leave their native cities because of this war. This is something we cannot come to grips with."

"Please, I would like you to show more leadership in our anti-war coalition. I would like to ask you to convince EU partners to introduce more rigid sanctions against Russia to make sure the Russian war machine will stop.

Mr. Zelenskiy outlined some of the losses and damage Ukraine has suffered since the Russian invasion began on February 24.

He said 42 days since the war began, at least 167 children have been killed, 927 educational institutions damaged, as well as 258 hospitals, and 78 ambulances have been shot at.

The national anthem of #Ukraine is being performed at the gates of Leinster House, in advance of the address by President Zelensky @rtenews pic.twitter.com/GaON3cWVgJ

Mr. Zelensky also said a new relationship between Ireland and Ukraine had been forged.

"The longer this aggression from Russia continues, the worse will be the consequences, not only for our continent but neighboring regions.

"Our courage has already turned the new age of relationship between Ukraine and Ireland."

Responding to Mr. Zelensky, Taoiseach Micheál Martin said that Ireland is resolute in solidarity and support for Ukraine.

To those who have arrived here from Ukraine, I hope you find in Ireland safe harbour and friendship for as long as you need it. In the meantime, our home is your home.#StandWithUkraine pic.twitter.com/2LXtJuRFOA

He thanked the president for his heartfelt, honest, clear and historic address to the Irish parliament, and said he was certain that Ukraine would prevail in its war with Russia.

He told the Dáil: "Russia will have to live with the shame of what they have done in Ukraine for generations. Those responsible will be held to account."

“We are not neutral when Russia disregards all of these principles,” he said.

Mr. Zelensky received a standing ovation from the joint sitting of the Oireachtas.

The Ukrainian President is the 22nd person to address a joint sitting of the Houses of Oireachtas since the first Dáil was established in 1919.