The European Union, including Ireland, has condemned the reported Russian atrocities in Bucha, Ukraine, which the Russian Embassy in Dublin claims is "disinformation." 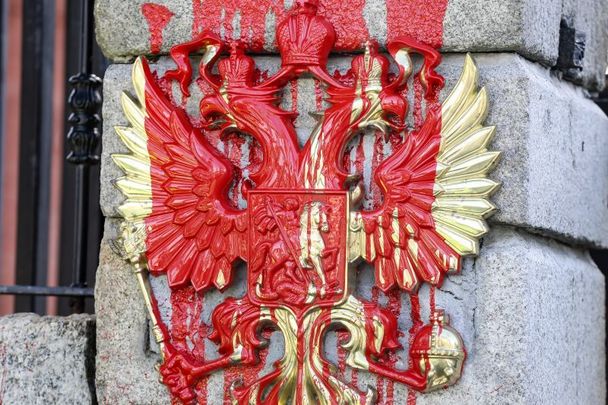 February 24, 2022: Red paint thrown across the coat of arms of the Russian Federation on the gate outside the Russian Embassy on Dublin's Orwell Road. RollingNews.ie

Ireland's Minister for Foreign Affairs Simon Coveney said on Sunday that Russia is committing "mass murder" against civilians and that the European Union needs to introduce tougher sanctions this week.

“The European Union condemns in the strongest possible terms the reported atrocities committed by the Russian armed forces in a number of occupied Ukrainian towns, that have now been liberated," the statement, issued today, April 4, by the European Council reads.

"Haunting images of large numbers of civilian deaths and casualties, as well as destruction of civilian infrastructures show the true face of the brutal war of aggression Russia is waging against Ukraine and its people. The massacres in the town of Bucha and other Ukrainian towns will be inscribed in the list of atrocities committed on European soil.

“The Russian authorities are responsible for these atrocities, committed while they had effective control of the area. They are subject to the international law of occupation.

“The perpetrators of war crimes and other serious violations as well as the responsible government officials and military leaders will be held accountable. The European Union supports all measures to ensure accountability for human rights violations and violations of international humanitarian law in Ukraine by Russian Armed forces.

“In particular, we fully support the investigation launched by the ICC Prosecutor into war crimes and crimes against humanity as well as the work of the OHCHR Commission of Inquiry. The EU is assisting the Ukrainian Prosecutor General and Civil Society focused on collection and preservation of the evidences of the war crimes.

“We stand in full solidarity with Ukraine and the Ukrainian people in these sombre hours for the whole world. The EU will continue to firmly support Ukraine and will advance, as a matter of urgency, work on further sanctions against Russia.

“President Putin must stop this war immediately and unconditionally.”

Ireland joins fellow EU member states to condemn in the strongest possible terms the atrocities committed by the Russian armed forces in a number of occupied Ukrainian towns, that have now been liberated.

The Russian Embassy in Dublin, Ireland, however, has since issued a statement that said: “The Russian Federation categorically rejects any allegations of the Russian Armed Forces involvement in the killing of civilians in the Kiev suburb of Bucha. There are no facts to prove such allegations.

“To the contrary, according to the Minister of Defence of Russia, its military units have left Bucha on March 30 and there has not been a single incident of violence against the people [of] Bucha during their stay in it. The reports of the ‘massacre’ appeared 4 days later, after Ukrainian forces have moved into Bucha. There are numerous independent assessments of these reports, which indicate its staged nature. That in itself should be a subject of discussion at the highest political level internationally.

“In the current political circumstances, judging by the simultaneous public statements by the EU and US officials made right at the moment of the release of the anti-Russian allegations in favour of imposing new sanctions against Russia, we are clearly witnessing yet another stage in the disinformation war against Russia.”

#Statement by the Embassy of Russia in Ireland pertaining to the situation in Bucha pic.twitter.com/dLSN5qixqg

On April 3, the day before the EU statement, Russia’s Ministry of Foreign Affairs claimed that “NOT A SINGLE local resident has suffered from any violent action” during the time Bucha was under control of Russian Armed Forces.

⚡️@mod_russia: During the time Bucha had been under the control of the Russian Armed forces, NOT A SINGLE local resident has suffered from any violent action.

Elsewhere on Sunday, Ireland's Minister for Foreign Affairs Simon Coveney spoke with his Ukrainian counterpart Dmytro Kuleba. Coveney said afterward: "We are witnessing mass murder against civilians at the heart of Europe by Russian forces.

"EU must respond strongly with tougher sanctions this week."

Spoke with @DmytroKuleba again this evening & heard descriptions of shocking crimes in Bucha.
Has history taught us nothing! - we are witnessing mass murder against civilians at the heart of Europe by Russian forces. #EU must respond strongly with tougher sanctions this week. https://t.co/T9rxVWYbCQ

Last week, Ireland's Department of Foreign Affairs confirmed that four senior Russian officials were to be expelled from Ireland. Ukrainian President Volodymyr Zelenskyy is due to address the Irish Government this Wednesday, April 6.