Ireland is expelling the senior Russian officials "because their activities have not been in accordance with international standards of diplomatic behaviour." 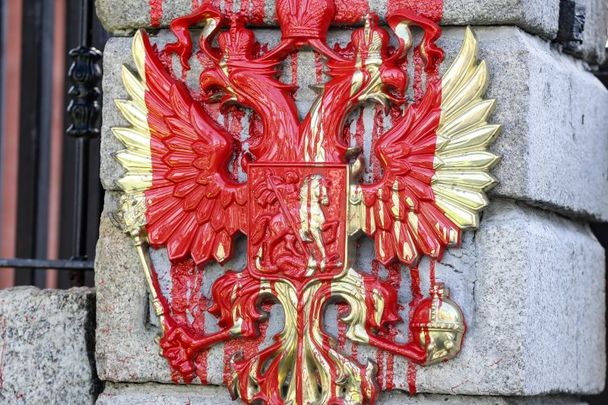 February 24, 2022: Red paint on the coat of arms of the Russian Federation on the gate outside of the Russian Embassy in Dublin, Ireland. RollingNews.ie

Four senior Russian officials are being expelled from Ireland, the Irish Department of Foreign Affairs has confirmed today, March 29.

"This is because their activities have not been in accordance with international standards of diplomatic behaviour. This action is being taken under Article 9 of the 1961 Vienna Convention on Diplomatic Relations.

In the Dáil on Tuesday, TD Ivana Bacik, leader of Ireland's Labour Party, raised the issue of expulsion of Russian diplomats to the Taoiseach.

The Taoiseach later replied: "I don't want to ever be accused subsequently of not fully informing the House, but as the question was coming through, the Department of Foreign Affairs had indeed summoned the Russian Ambassador, and I was loath to override what would be normal diplomatic protocols.

“Under the 1961 Vienna Convention, four senior officials of the Russian embassy have been asked to leave the State because their activities are not in accordance with the international standards of diplomatic behavior.

“I met yesterday in relation to this with our national security team and under Article Nine of the 1961 Vienna Convention, we have taken these actions.

“We nonetheless do believe that diplomatic channels between the Russian Federation and this State should stay open, in the interest of us conveying our abhorrence of the war and maintaining diplomatic channels as a principle, but also to protect Irish citizens in Russia and elsewhere.”

The Russian Embassy in Ireland has since responded, saying in part: "The Embassy rejects such qualifications of the work of our diplomats.

"This is arbitrary, groundless decision, which can only deteriorate further Russian-Irish relations, already damaged by the Irish participation in illegitimate EU sanctions against Russia.

"The Embassy proceeds from the assumption that such a step by the Irish side will not go unanswered."

#Statement by the Embassy of Russia pic.twitter.com/sEdQizOGVx

Ireland is among a number of countries that today announced the expulsion of Russian diplomats - the Netherlands is expelling 17 Russian officials, Belgium is expelling 21, accusing them of "espionage," and the Czech Republic is expelling one diplomat.