A newly published opinion poll found that support for joining NATO has reached a record high in Ireland, with 48% of the population in favor and 39% against. 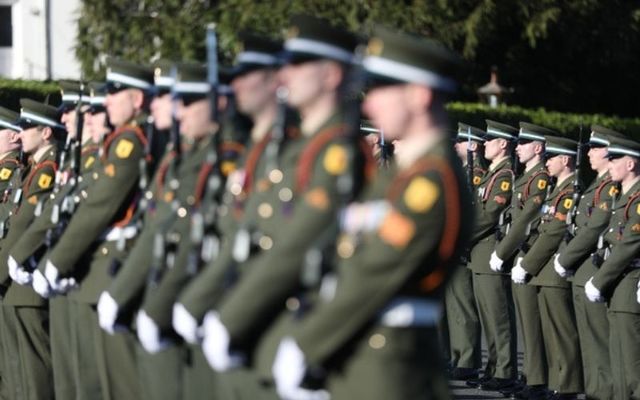 An Irish Army honor guard at Áras an Uachtaráin in February. RollingNews.ie

Almost half the citizens of Ireland support joining NATO following the Russian invasion of Ukraine, according to a new opinion poll.

Support for Ireland joining NATO has reached a record high in Ireland, with 48% of the population in favor and 39% against, according to a new Red C opinion poll published in the Sunday Business Post.

Only 34% of Irish citizens supported joining the military alliance in January prior to the outbreak of the conflict in Ukraine.

Almost half of those surveyed (46%) say they support a referendum for Irish troops to serve in a potential European army in the future.

A total of 59% of Irish people say they would support an increase in military spending, compared to just 28% who are against the proposal, while 39% of those surveyed believe that Ireland should send armed support to Ukraine.

The Irish Government is currently only sending non-lethal aid to Ukraine, including medical supplies, body armor, and humanitarian aid.

However, 57% of those surveyed said they disagreed with Ireland dropping its neutrality.

Ireland's neutrality dates back to the Second World War when then Taoiseach Éamon de Valera refused to join the Allies despite the efforts of British Prime Minister Winston Churchill, who proposed Irish unity in exchange for Ireland joining the war.

The Russian invasion of Ukraine on February 24, coupled with the Russian Navy's attempts to hold live-fire drills off the Irish coast in February, has prompted fresh discussions about Irish neutrality.