Ireland is pulling out all the stops to care for the thousands of Ukrainian refugees arriving in the country, but keeping the locals and newcomers satisfied down the road will be a challenge for the Irish government. 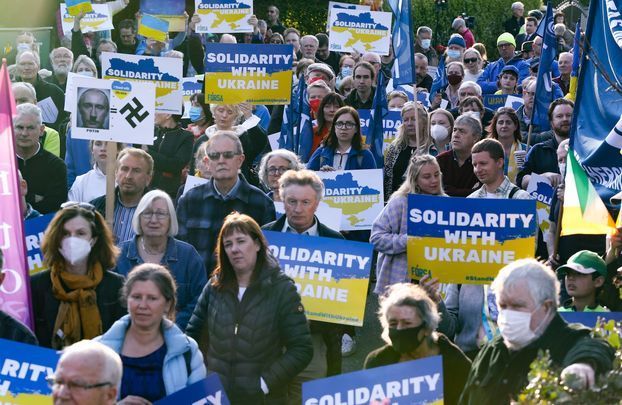 "Stand with Ukraine": A protest against Russia's invasion of Ukraine in Ireland. Rolling News

It is said that the road to hell is paved with good intentions, and as far as intentions go there is none better than housing the Ukrainian refugees escaping from Vladimir Putin’s madness. However, the danger is that if it is not properly planned, resourced, and explained to the Irish public, it could all end in tears.

To date, the tens of thousands of Ukrainians that have landed on our shores have been dealt with by a mixture of government intervention and altruistic citizens. The response by officialdom has been fast, flexible, and appropriate.

At Dublin Airport and at seaports around the country, officials from a variety of Irish departments are on hand to assist incoming refugees along with Irish volunteers from a variety of organizations including the Irish Red Cross.  Reception centers are being set up in other major cities including Cork and Limerick, with one-stop shops being put in place.

Red tape has been cut to a minimum, with visa requirements waived for those coming in. They also receive a temporary protection status which will allow them to live and work in Ireland.  Medical cards have been issued which give free medical treatment and access to social welfare payments put in train.

Education providers have pulled out all the stops and young children have been enrolled in schools within days of coming here, while adults have been facilitated on English language courses just as quickly.

Bilingual welcome signs in Ukrainian and English are apparent at ports of entry, and those that register for entry receive new phones, SIM cards, and chargers. Nothing, it would seem, has been overlooked.

The public has also rallied to the cause, with Irish people seeing Ukrainians as fellow Europeans and deserving of assistance and support.  Tales of selflessness abound, with one Irish family taking in 11 refugees, and another moving out of their home to allow a large family move in.

Collections of money, clothes, and other useful items have taken place up and down the country. Homes have been opened up to take people in.

The Catholic Church has also thrown its support behind the effort.  A national collection has been held, parish halls opened up for adult schooling and in the diocese of Armagh, Archbishop Eamon Martin has asked his priests with vacant rooms to take in refugees.

But while there has been widespread praise for the Irish response, there are indications that beneath the surface tensions are beginning to bubble.

For one thing, Ireland’s housing crisis has not gone away and it will not be physically possible to house the 40,000 refugees that the government estimates will arrive here if the conflict continues. This will equate to a one percent increase in the country’s population.

While over 20,000 people have been offered some type of housing, the physical assessment of this accommodation by the Red Cross and Irish auctioneers (realtors) is taking time.  It is inevitable that congregated settings such as hostels and hotels will be used, and when they are the government needs to ensure that proper facilities, especially in relation to education and health, are within reach, although the recent news that large tented structures are being built by the army as a last resort is not encouraging.

But the response from the public needs to be acknowledged in monetary terms.  Surging inflation, especially in terms of heating and fuel costs, will become a major burden on these generous homeowners who have opened their doors.  They can’t be expected to open their bank accounts as well.

It’s also unavoidable that Irish citizens who are now waiting for some considerable time for housing will become resentful if they are seen to drop down the pecking order, especially as there are reports of vacant local authority properties being allocated to Ukrainians.

Similar issues are certain to arise in the provision of medical cards.  On one hand, the Department of Health is withdrawing these cards from people who are marginally over the income limit while at the same time allocating them to new arrivals.

This is not to say that the problems in housing or health provision are insurmountable.  But they need to be addressed in the context of existing ongoing problems.

There is also the question of current asylum seekers, some left in limbo land for over eight years. Already there are complaints about a two-tier refugee application process.

Minister for Justice Helen McEntee’s claim that Ukrainian refugees were not being treated differently from refugees from Syria or Afghanistan is untrue.  There were no welcoming signs in the native languages of Syria or Afghanistan when those countries were in war situations.  Nor were people fast-tracked for housing and jobs.

In fact, for many who come here seeking asylum, there is a four-year wait before a first emigration interview.  These Direct Provision centers, so-called because everything is supplied, that host the refugees are for-profit enterprises run on behalf of the Irish government. They are depressing locations that suck the hope out of the inhabitants and wear people down.

The answer is simple but expensive.  Rather than dragging down the new arrivals to the atrocious level of service that is given to current asylum seekers, surely it is necessary to raise that up to a more humane level.

It is incumbent on the government to set out its vision as to how all these questions will be addressed so that there can be buy-in from everyone. At the heart of this are individuals who are traumatized, shocked and vulnerable, and families who have lost everything. They are innocent and deserve the best possible treatment.

The huge goodwill and sympathy that is there must not be squandered, but even more important is that it must not be taken for granted.