Russia's Ambassador to Ireland Yuriy Filatov will not attend Ukrainian President Volodymyr Zelenskyy's address to the Irish government on Wednesday. 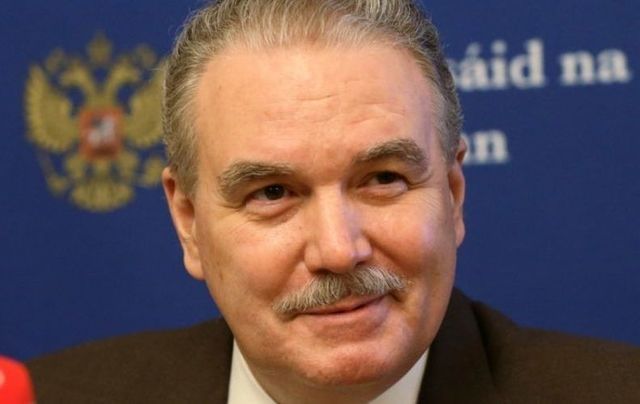 All diplomatic missions based in Ireland were invited to attend Wednesday's event. However, it has now emerged that the Russian Embassy is not one of the 45 missions that had indicated that their diplomats will attend Wednesday morning's event at Leinster House in Dublin.

President Zelenskyy's address, scheduled for 10 am Irish time on Wednesday, April 6, is set to be streamed live on oireachtas.ie, Twitter, Facebook, and on Oireachtas TV.

Russia's Ambassador to Ireland Yuriy Filatov is invited to attend Ukrainian President Volodymyr Zelenskyy's address to the joint houses of the Oireachtas on Wednesday, April 6.

“All of the diplomatic corps have been included, and it’s a matter for each ambassador to decide if they attend or not,”  Ceann Comhairle (Speaker of the Dáil Éireann) Seán Ó Fearghaíl told The Irish Times.

The Russian Embassy is yet to confirm whether Filatov will attend the address, according to the Irish Times.

Zelenskyy will address the Oireachtas for roughly 10 minutes before leaders of the large parties are granted a six-minute speaking slot. Leaders of the smaller spots will be allowed to speak for three minutes.

Ó Fearghaíl told the Irish Times that he would make a short address to commence proceedings at 10 am on Wednesday and said he planned to call on Russian politicians to take a stand against the invasion of Ukraine.

"I’ll be acknowledging the importance of the presentation of the president and using the opportunity as chair of our parliament to call on the Duma to recognize it has a responsibility. There are 450 members of the Duma, they can’t all believe the propaganda, lies, and fake news presented to them. I’ll be calling on them to find the courage the Ukrainian people are finding on a daily basis and to stand up and be counted," he told the Irish Times.

Zelenskyy will address the Oireachtas just days after Ukrainian authorities announced that the bodies of 410 civilians have been found in towns surrounding Kyiv following the retreat of Russian forces from the area.

A mass grave measuring 45ft feet was discovered in the town of Bucha, prompting international outrage.

Zelenskyy described Russian soldiers as "murderers", "butchers", and "rapists" following the discovery of the bodies and said Russia's public image is now that of torture and execution.

"Your culture and human appearance perished together with the Ukrainian men and women," Zelenskyy said on Sunday night, adding that "even worse things" may still be found.

Last week, Ireland's Department of Foreign Affairs confirmed that four senior Russian officials were to be expelled from the country.