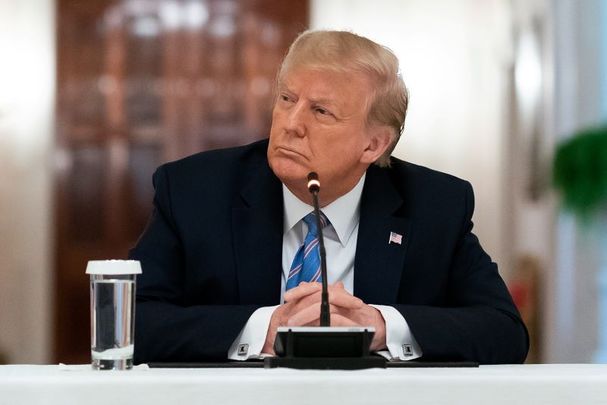 If President Trump were in office in the time of Lincoln, rest assured that there would have been no Emancipation Proclamation and hundreds of thousands, perhaps a million Irish would have never been allowed access to America.

Trump has shown himself incapable of empathy, of feeling the pain and stress of others. Instead, you're a loser -- unless you’re a gangster like Putin, or a thug like Kim Jong Un, or others who have their feet firmly planted on the necks of their own people.

It is all artifice and fake of course. The bully boys like Putin and Trump abrogated their responsibilities to their own people by letting coronavirus run rampant.

Kim denies there have been any cases in his country, a blatant falsehood. Trump even stated publicly the buck does not stop with him. Well If not you, who Mr. President?

Trump in the Lincoln era would have fed off the scenes on the docks of Boston and New York with desperate immigrants arriving, many in ill health, and used it to rabble rouse which he did over July 4 this year at magnificent venues such as Mount Rushmore which belong to the nation, not to a penny-ante politician.

As The Washington Post stated, Trump “got his crowds and his fireworks and peddled his fiction.”

His speech was designed to set off one group of Americans against another, to fan the embers of the Civil War and slavery’s legacy, and to mount a defense of Confederate monuments, many created long after the Civil War to reinforce the message of “black man lie down.”

Read More: America in crisis and decline this July 4, all due to Donald Trump

The wonder is we are surprised that Trump still shocks.  You could take his very first speech where he delivered “facts” that Mexico was sending rapists as well as workers to America, and draw a straight line to the demonization in recent weeks of peaceful demonstrators who he claims are trying to tear the country apart.

Trump probably believes in his own pulp fiction.  He is an agitator, not a healer, a man driven by hate, not respect or love.

Trump is not a Lincoln Republican. Had he been born the same time as Lincoln, he would have become a Know-Nothing member, the secret society pledged to stop Irish and German Catholics coming to America and stop immigrants from getting gainful employment. They were the physical force wing of the Republican Party until Lincoln denounced them in no uncertain terms.

They got their name because they said, “I know nothing” when questioned about attacks on Catholics and burning down Catholic schools.

They were also determined to stop immigrants from voting. In Louisville in 1865, they shot and burned to death 22 Irish immigrants who had the temerity to vote. They led anti-Catholic riots in many cities.

The Know-Nothings were very powerful. President Millard Fillmore was one though he would never admit it publicly. Senior figures in politics, the law, and commerce all signed on to their oath of disavowing Catholics and repressing Irish immigrants.

Trump would have loved it, another group to bait and agitate.

Sad to say, according to the recent Pew Research poll, too many American white Catholics have forgotten their history.  Fifty-four percent of them pledged their support for Trump with only 44 percent dissenting.

It seems the bigger the lie, the more the Trump faithful want to believe. Russians paying bounties for dead Americans? Fake news.

The president bears “no responsibility” for the massive failure to contain COVID-19.  Why would he, he’s only the president?  The buck does not stop with him.  Of course not.

Back in the day, in the old Superman comics, there was a planet called Bizarro where everything was the opposite of everything on earth. I have a feeling we might have landed there after Trump took office.  Bizarro indeed.

Read More: Donald Trump has challenged death to a duel and guess who is winning