The President was addressing thousands of his supporters from beneath Mount Rushmore on the eve of America's Independence Day. 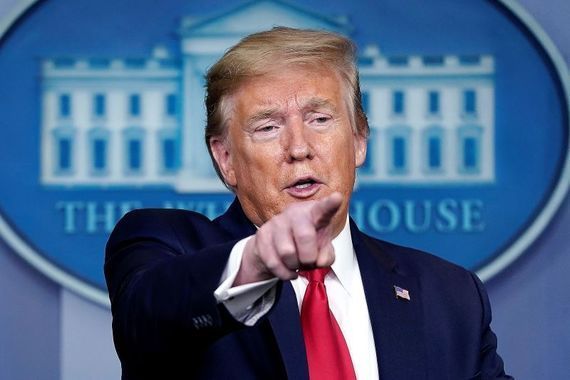 US President Donald Trump condemned "angry mobs" who pulled down statues of Confederate soldiers and other controversial historical figures, claiming that America is under siege from "far-left fascism."

The President was addressing thousands of his supporters from beneath Mount Rushmore on the eve of America's Independence Day and he claimed that left-wing protesters were trying to erase American history and overthrow the American Revolution.

"Make no mistake, this left-wing cultural revolution is designed to overthrow the American revolution," Trump told his supporters.

He claimed that the US was witnessing a "merciless campaign" to wipe out its history, defame its heroes and indoctrinate its children.

"Angry mobs are trying to tear down statues of our founders, deface our most sacred memorials and unleash a wave of violent crime in our cities."

The President claimed that left-wing protesters demanded "absolute allegiance" but promised his supporters that he would not be intimidated by "bad, evil people".

"There is a new far-left fascism that demands absolute allegiance. If you do not speak its language, perform its rituals, recite its mantras, and follow its commandments then you will be censored, banished, blacklisted, persecuted, and punished. Not gonna happen to us," he told his supporters in South Dakota.

Trump also announced that he would create a "National Garden of American Heroes" to honor the "greatest Americans who ever lived" but did not elaborate any further.

He has also refused to rename areas and army bases named after Confederate figures in recent weeks and promised harsh punishments for anyone who damaged statues.

The event was not an official campaign rally, but it had the feel of one with the partisan crowd raucously chanting "four more years" at points during the event.

The President was speaking to around 7,500 supporters, many of them maskless, at a time when seven different states reported a record number of new daily cases of the coronavirus and when one of his senior campaign officials tested positive for the virus.

Kimberly Guilfoyle, a top fundraiser for the Trump campaign and the girlfriend of Donald Trump Jr., tested positive for the virus while in South Dakota, forcing her and Donald Jr. into isolation. Trump Jr. has reportedly tested negative for the virus.

A number of Native American protesters were arrested in the Black Hills National Forest, where Mount Rushmore is located, for attempting to block access to the famous monument.

The protesters criticized the President for increasing the risk of spreading the coronavirus in South Dakota, which has not been hard hit by the virus. They also hit out at Trump for celebrating US Independence in the Black Hills, an area that was taken from the Lakota People.

Trump, meanwhile, will hold another Independence Day celebration in Washington DC on Saturday.

Read more: America in crisis and decline this July 4, all due to Donald Trump