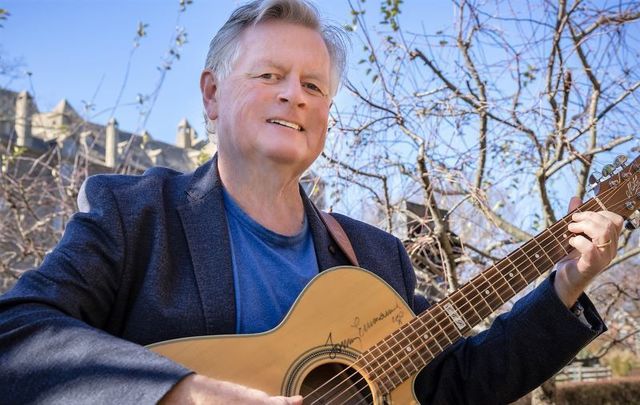 Seamus Kelleher is one of the best-known Irish American musicians of this era, a unique talent who connects with audiences from Philadelphia to Phoenix and everywhere between.

He headed the legendary Blackthorn group out of Philly, a band that regularly attracted thousands to concert venues in its heyday.

But like many fine artists, behind Kelleher’s talent was a sad truth -- childhood abuse, depression, anxiety, drug, and alcohol abuse that almost cost him his life.

Kelleher has recounted it all in a book entitled "Shine the Light" (available via Amazon or at shinethelight.net) which unflinchingly recalls his triumphs but also the dark underbelly of his lifelong battle with alcohol and depression and the toll it took on his life.

It is a brave work, a searingly honest dialogue discussing the most private of illnesses plainly and forthrightly, and the love of others and the self-determination that saw him through.

Kelleher, the lead guitarist for Blackthorn, reveals the scared stranger within when the lights were off, the fans went home and the final riff finished.

Inside there was an Irishman brought up in the stultifying Catholic Ireland of the 1950s who suffered greatly from the behavior and mindset of many perverted members of the clergy who dominated the political and religious landscape.

Remember at this time, Ireland was a country where the archbishops met in session to ban Tampax as use of the sanitary product might arouse women. Such was the Ireland of Saints and Scholars.

It is no surprise in that atmosphere that a Yungian shadow self-version of Seamus Kelleher emerged, at times a rock star and then a raging alcoholic, a victim of such deep depression that he could never find a safe horizon through the fog and feared his suicidal impulses.

A stay in what the Irish call a mental home at a young age merely foretold Kelleher’s destiny as outlined by a doctor who treated him that he was doomed to life filled with depression unless he acted decisively.

He did just that and set out for America.

It was a wrenching decision to leave Ireland. He had the beginning of a music career, a steady girlfriend, and a close-knit family, alas one that was shattered by the death of his mother at an early age.

Kelleher’s guitar playing was superb; he counted Rory Gallagher and Phil Lynott as among his supporters. He could have stayed home and tried to fight through.

But instinctively Kelleher knew he had to get out. He landed like so many Irish in the Bronx, looking for a start and staying with relatives.

He found work impossible to get until a kindly bar owner gave him some afternoon shifts. It was just one of many hands that reached out to help him.

The goodness and decency of so many in the Irish American community is well delineated in Kelleher’s book. The helping hand was never far away.

But even as he began to expand his career and impress MTV enough that they gave his band a trial, the darkness still haunted him.

He was blessed to find a remarkable woman in Mary Pat (their extended courtship would make a novella of its own), and so he had one rock in his life he could always count on.

He created a very successful career for himself as a talented guitar player, but it always seemed a black cloud would slowly settle over him regardless of all his success.

There were other confinements in hospital and, in the end, a drunken fall that could have left him with brain damage. But still, he couldn't quit the drink.

Kelleher describes with searing honesty driving inebriated with his kids in the back seats, the only time his wife threatened to forsake him.

It was hard to give it all up for sobriety.

Slowly but surely Kelleher began to tackle his demons. He proved up to the challenge with a loving wife and young family behind him. The demons are down now, but he knows they are never out.

Kelleher has written an inspirational book that whispers hope for everyone trapped in their inner voices and vices like he was.