RIC police force should never be honored given their savage past

Irish government deferred their commemoration of the Royal Irish Constabulary, the Irish police force who kept the peace for the British from 1822 to 1922. 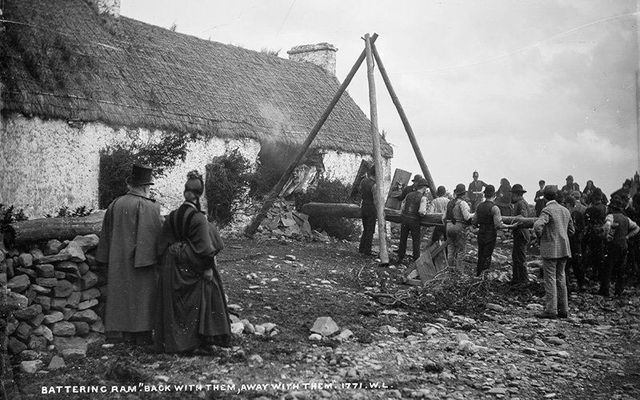 A battering ram used by the RIC to breach a farmer's home. Photo inscribed with the words "Back with them, away with them." National Library of Ireland.

The Irish government has seen the light and decided to defer a commemoration of the old Royal Irish Constabulary, the Irish police force who kept the peace in Ireland for the British from 1822 to 1922.

Irish Americans also felt strongly that commemorating the RIC was like honoring the police forces who administered the racial segregation, Jim Crow laws in Southern America.

Here’s an account of the RIC's real role from History Ireland as witnessed during the Famine:

“The scale of famine-era clearances, as well as the density of population on smallholdings, are starkly illustrated by a mass eviction on the property of John Gerrard, Ballinlass, Galway, in March 1846. The (RIC) Constabulary Sub-Inspector, Bernard Cummins, was called on to protect the sheriff’s party with forty-five constables and ninety soldiers." 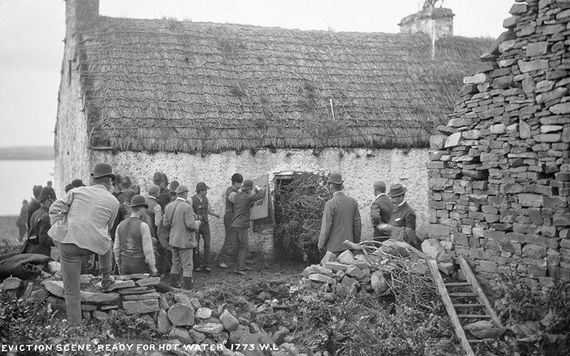 Police shield themselves against hot water thrown by tenants while carrying out an eviction. (Via: NLI)

Eighty houses were leveled to the ground, in this case, and 80 families consisting of upwards of 400 individuals were dispossessed.

“The unfortunate people who were turned out are in a state of misery not to be described, scattered over this neighborhood, living in the ditches, or anywhere they can find shelter to erect a hut.”

Sure you can argue that the RIC were only doing their job but that job was facilitating, and often carrying out the eviction, starvation, and murder of innocents, including children and the forced exile of others all the time taking the King’s Shilling. 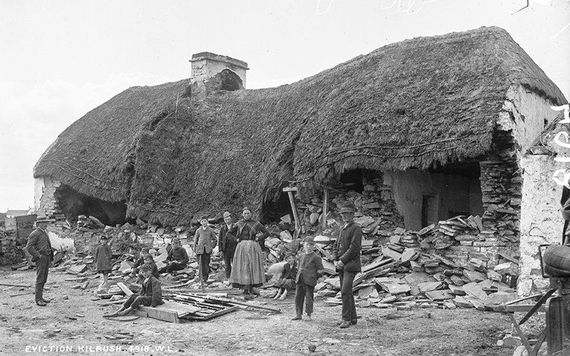 Mathias McGrath's home in Moyasta, County Clare after destruction by a battering ram. (Via: NLI)

The RIC were the British handmaidens in Ireland maintaining repression helping defeat the Fenian movement and 1916 Rebels and often using savage reprisals.

Read more: One in five Black and Tans were Irish - women often abused by vicious force

To their credit, many senior politicians immediately refused to attend, including John Sheehan the Lord Mayor of Cork and Cathal Crowe the Mayor of Clare who pointed to the role of the RIC as a brutal one in keeping Britain’s stranglehold over Ireland during their existence.

Before it was called off, Sheehan stated “You are commemorating an institution that took the side of the Black and Tans during the War of Independence. Particularly given Cork’s history with the Black and Tans. The RIC were part of that." 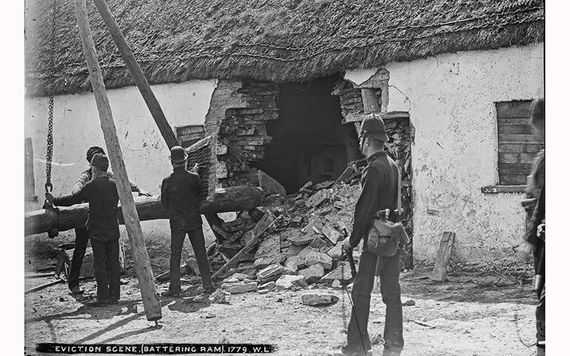 Police use a battering ram to forcibly evict a tenant c. 1888.

Cork’s Lord Mayor said pointing out the RIC brutally killed Irish rebel and Cork Lord Mayor Tomas MacCurtain. MacCurtain was shot dead in front of his wife and son by a group of men with blackened faces, who were found to be members of the RIC by the official inquest into the event.

Last week, Crowe said he was boycotting and believes it is “wrong to celebrate and eulogize” the RIC, “an organization that was the strong arm of the British state in Ireland”.

In a statement, Crowe said: “In the main, I think all of the Government’s State commemorations have been apt and tasteful but I see the commemoration of the RIC as a step too far.”

I heartily agree. In Ireland’s worst times this police force acted like the German World War II Gestapo insuring Famine tenants were evicted and forced into starvation and exile. Likewise, they backed up the Black and Tans during their murderous campaign in the War of Independence era in Ireland.

Honoring them was a bridge too far.