Taoiseach Leo Varadkar says it's a "shame" that some people and politicians are boycotting the planned Royal Irish Constabulary commemoration event. 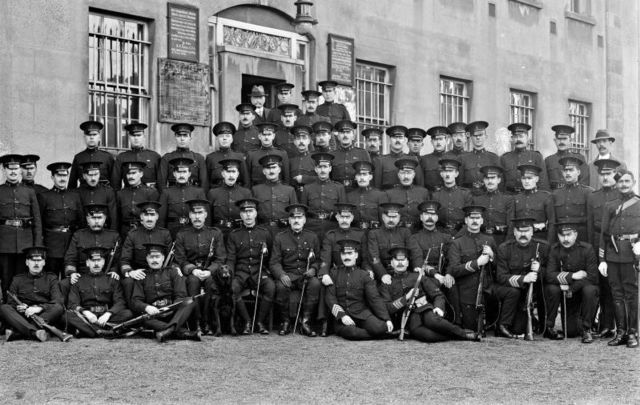 Update: On January 7, Minister for Justice Charlie Flanagan announced that the commemorative event had been "deferred." Read about it here.

As the Irish government prepares to host a commemorative event for the Royal Irish Constabulary (RIC) and the Dublin Metropolitan Police (DMP) this month, Irish politicians and members of the public are responding with a boycott.

On January 1, The Irish Times reported that the Irish government is set to host an event at Dublin Castle on January 17 to commemorate those who served in the RIC and DMP prior to Irish independence. Minister for Justice Charlie Flanagan and Garda Commissioner Drew Harris are expected to address the event.

The event is being hosted as part of the Irish State's 2019-2023 programme to mark Ireland's decade of centenaries, which is being offered "to ensure that this complex period in our history, including the Struggle for Independence, the Civil War, the Foundation of the State and Partition, is remembered appropriately, proportionately, respectfully and with sensitivity. "

Cathal Crowe, the mayor of Co Clare and a member of the Fianna Fáil party, said in a Facebook post on January 4 that he will be boycotting the event.

COMMEMORATION BOYCOTT: I have decided to boycott the national commemoration service for the Royal Irish Constabulary...

Crowe wrote: “As Mayor of Clare I was invited to attend the event by the Minister of Justice. In the main, I think all of the government’s state commemorations have been apt and tasteful but I see the commemoration of the RIC as a step too far.

“I studied history for 4 years at the University of Limerick and blog regularly about local history on my social media pages. I am also a committee member of a War of Independence commemoration committee in my home parish of Meelick-Parteen.

“I don’t hold any ill-feeling towards the individual men who served in the RIC Division of Clare - many of them were decent people who were guided by their strong civic and law-abiding principles. I do however think it’s wrong to celebrate and eulogise (I consider “commemorate” to be a verb with positive connotations) an organisation that was the strong-arm of the British state in Ireland. The RIC joined army and auxiliaries (Black & Tans) in search parties and raids that resulted in our country-people being killed / tortured or having their homes torched.

“A further issue I have with the state commemoration is that An Garda Síochána will be central to the entire event. The guards have my full and upmost respect but I don’t believe that historically or ethically they should seek to claim any form of descent from the RIC. The Irish defence forces see themselves as a totally distinct organisation from the British army.

“I honestly believe that Ireland, her government and her people have thus far sensitively commemorated all of the seminal events of the Decade of Centenaries but commemorating the RIC is definitively an overstretch. It’s also historical revisionism gone too far.”

On January 5, Crowe said in another post: “If I were to go and wear the mayoral chains; that include the names of many who fought militarily and politically for Irish independence, I would be showing the upmost disrespect to the forefathers of Clare County Council.”

John Sheehan, fellow Fianna Fáil member and Lord Mayor of Co Cork, said he will also not be attending: "I won't be attending for various reasons. One is that this is commemorating the institutions and not the individuals.

"It would not be appropriate for me to attend while wearing the same chain that Tomás MacCurtain once wore, especially when he was killed by RIC officers.

"I could not commemorate [the RIC] and then commemorate Tomás MacCurtain's death a few weeks later... it would just not be appropriate."

Read More: Fake news: The IRA and the burning of Cork in 1920

In response to the outcry in the wake of the announcement of the event, Taoiseach Leo Varadkar said on January 6: “I think it’s a shame that people are boycotting the event but the Government stands over the decision to hold the event.

Taoiseach @LeoVaradkar has said he is disappointed that some people are choosing to boycott a commemoration for members who served in the Royal Irish Constabulary and the Dublin Metropolitan Police prior to independence. | https://t.co/ZfzelLcfq4 pic.twitter.com/fYG1gQhHjw

Varadkar said: “I’m disappointed to hear that some people are going to boycott the event. I think that is regrettable. I remember, you know, 10, 15 years ago, it was very controversial to commemorate the deaths of [Irish] soldiers in World War I because some people felt that they shouldn’t be remembered because they fought for [the] United Kingdom, because they fought for the British.

“That has changed. We now all accept, or almost everyone accepts, that it is right and proper to remember Irish people, soldiers who died in the First World War. And I think the same thing really applies to police officers, police officers who were killed, Catholic and Protestant alike, who were members of the RIC and the DMP; many of those [officers’] families are still alive and remember them.”

Minister for Justice Charlie Flanagan, who is due to deliver an address at the January 17 event, said in a statement: "The approach to the Decade of Centenaries has made clear that there is no hierarchy of Irishness and that our goal of reconciliation on the island of Ireland can only be achieved through mutual understanding and mutual respect of the different traditions on the island.

Flanagan added: "It is not a celebration.  It is an acknowledgment the historical importance of both the DMP and the RIC, and is in no sense a commemoration of the 'Black & Tans' or the 'Auxiliaries.'"

"There is no question but that there are very real sensitivities involved here.  I acknowledge that. But there are sensitivities on both sides. The RIC has found itself on the wrong side of history. The intolerance that was often characteristic of Ireland in the past sometimes forced people to deny their own family histories and airbrush parents, grandparents and siblings out of the picture for doing no more than serving as an army officer or police officer to support their families. It should be noted that the vast majority of Irish people who served as army and police officers did so with honour and integrity.

"That is why it is disappointing to see some public representatives abandon the principles of mutual understanding and reconciliation in an effort to gain headlines.  This attitude, combined with a distortion of the nature of the commemoration, is ill becoming of any public representative and represents a step backwards to a more narrow-minded past characterized by a hierarchy of Irishness."

Read More: One in five Black and Tans were Irish - women often abused by vicious force

More pushback to the RIC commemoration

The same day that Varadkar and Flanagan came out in defense of the upcoming event, more Irish politicians came out in opposition.

In a tweet on January 6, Sinn Féin leader Mary Lou McDonald called for the cancellation of the event:

Govt commemoration of RIC, Black&Tans, DMP a calculated insult to all who stood for Irish freedom. Nowhere else would those who brutally suppressed national freedom be afforded a state commemoration. Crass Fine Gael revisionism gone too far. Cancel this event @LeoVaradkar pic.twitter.com/YFiOi2eets

Sinn Féin tweeted on January 6 that the commemoration is an "insult:"

Fine Gael are more interested in commemorating the enforcers of British rule in Ireland - such as the RIC and DMP - than those ordinary citizens who bore the brunt of British forces.

It is an insult to their legacy. pic.twitter.com/IDwbbsqzRq

Donegal County Council Cllr Micheal Cholm Mac Giolla Easbuig has requested an urgent meeting on how to respond to the upcoming event. He said, "it is incumbent on DCC to follow the lead set by our colleagues in County Clare and adopt a council position on this vitally important issue.”

John Pratt, member of the Labour party and mayor of Co Waterford, said he has not yet decided whether or not he'll attend: “As mayor, I can’t just go on what I think personally. I have to try to represent all parties and none, especially if attending events outside the city and county.

“I’m open to hearing the views of other people before I make an informed decision. While history is important it shouldn’t be a cause for division. I’d prefer to be spending my time bringing people together to fix problems in the here and now.”

A petition on Change.org entitled “Don’t Commemorate the Black and Tans” has gathered more than 32k signatures as of Monday evening.

Late in the day on Monday, Dublin City Council voted 38-10 to officially boycott the event after an emergency motion was presented, which read: "Only a subservient government suffering from a post-colonial state of mind and ashamed of our revolutionary history would encourage this disgraceful event."

In a statement, the DCC said: “The RIC and the DMP had an intolerable record of barbarism in this country while carrying out British rule in Ireland.

“That this obscene event is taking place is not only an affront to generations of patriots who struggled to end centuries of imperial tyranny but it seeks to question the very legitimacy of our battle for independence and sovereignty.”

What are your thoughts on the planned RIC / DMP commemoration event? Let us know in the comments