One hundred years ago this month the Black and Tans began recruiting. 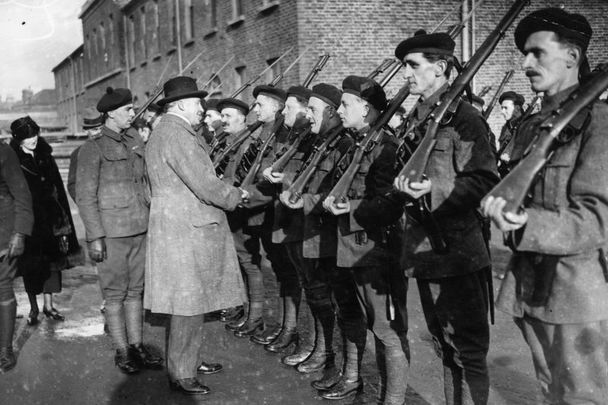 Sir Hamar Greenwood inspects a group of Black and Tans in 1921. Getty

One hundred years ago this month the Black and Tans began recruiting and were officially created in March 1920. Hidden facts about the number of Irish-born and Tans abusing women have recently been revealed.

One in five of the hated Black and Tans, recruited to spread terror in Ireland during the War of Independence were Irish-born, Diarmaid Ferriter, a leading Irish historian has stated.

A hidden history of abuse of women by the Tans was also mentioned by Ferriter who writes:

“Beatings, hair cuttings and worse were described in contemporary newspapers under the catchall label “Outrages”, which included women in night attire being assaulted by drunken Black and Tans. Sexual assaults were occasionally recorded by Sinn Féin’s The Irish Bulletin.”

Writing in The Irish Times, Professor Ferriter stated that may Irish secretly joined the Tans attracted by the pay and a steady job. The weekly salary was three pounds and ten shillings.

Black and Tans patrol the street.

One hundred years ago this month, the first recruitment of the Tans began after Michael Collins had essentially made Ireland ungovernable during the War of Independence and the Royal Irish Constabulary were utterly overwhelmed.’

Ferriter notes that Lord French, the Lord Lieutenant of Ireland, admitted to Ian MacPherson, the Chief Secretary of Ireland: “matters here are really getting beyond the control of the police”.

This was after an IRA directive that “the police should be treated as persons who having been adjudged guilty of treason to their country.”

A new force was put together, recruited from all over Britain, quickly known as the Black and Tans because of the ill-matched colors of their uniforms which combined policeman black jackets with army tan trousers.

Black and Tans outside the Western Hotel, London.

Twenty percent of those recruited were from Ireland, mostly former British Army servicemen. Eventually, there were a total of 8,000 sent to Ireland. The highest number were sent to Cork with Tipperary receiving the next highest number.

Historian WC Lowe who  has written extensively on the period,  described the fact that 20 percent were Irish-born as very surprising saying it was

"An unexpected finding that is at odds with popular memory...that 20 percent of the Black-and-Tans and about 10 percent of Auxiliaries were Irish ."

Atrocities by the Tans were so frequent that even British public opinion was shocked. As the Observer newspaper in Britain put it in September 1920, the Tans  contributed to “the immense weakening of Britain’s moral position throughout the world.”

Indeed the stories of the atrocities made Irish Americans in particular extremely agitated and fundraising for the Irish rebels were widespread across the country.