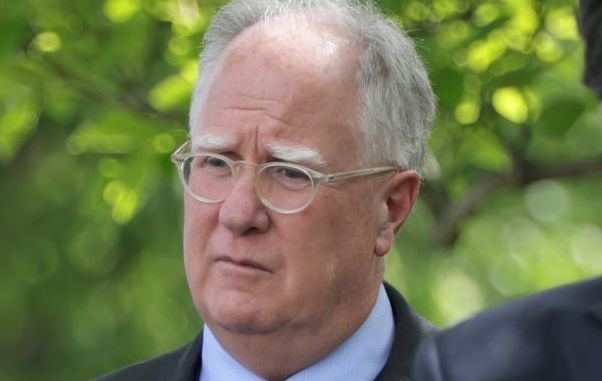 May 13, 2021: Mike Donilon, Senior Adviser to President Biden, ahead of a briefing from the president in the Rose Garden of the White House in Washington, DC. Getty Images

Meet Irish American Mike Donilon, 61, the second most powerful person in the White House yet a person who remains almost utterly anonymous.

But lately, the media has begun to discover just how important the self-effacing Donilon is when the chips are down and large decisions have to be made.

Every White House has its power struggles between competing staff but this one feels different. Donilon is the undisputed, if quietly behind-the-scenes, boss.

His title is senior advisor which could mean almost anything, but Donilon has the access, ear, and confidence of President Biden like no one else on earth.

Donilon has assumed that power quietly. It is even hard to get a decent photograph of him as he is so self-effacing.

There is very little of the Obama drama when Rahm Emanuel was the raging bull in charge, or the chaos under Trump who ran through chiefs of staff like disposable wipes.

At 78, Biden wants a comfort level of competency and loyalty in those around him. In the main, he has got it. There have been very few leaks from this outfit, unlike the Trump administration where everyone was leaking like the Titanic as it went under.

The stability is a hallmark of Donilon’s modus operandi. He has known Biden for 40 years and has served him for 30 of those years or so.

The Washington Post has reported that Donilon is Biden’s “conscience, alter ego and shared brain." One staffer quoted in the article stated that he estimated Biden has turned to Donilon about 10,000 times during his political career and asked, “Mike, what do you think?”

Donilon is from a modest background. His grandparents were penniless emigrants from Ireland. His mother worked as a school secretary and his father in product control in a local business.

He and his two brothers certainly went on to greater things. His brother Tom was national security advisor to Obama while a third brother is a key advisor to Cardinal Sean O’Malley of Boston.

The London Times reported last week that most often Biden will accept Donilon’s assessment of a situation. “What does Mike think?” is usually the tip-off that a conclusion has been reached.

Donilon was the first person Biden called when he decided to run again for president after watching the white supremacist rally in Charlottesville in the summer of 2017, just a few months after Trump took office.

Donilon is also the person who gave Biden the key advice to not mix it up with Trump, to let his Twitter bloviating go unchallenged, believing that the American people had enough of the loud and bombastic president.

He was certainly right in that assessment.

While there are those like Chief of Staff Ron Klain and National Security Advisor Jake Sullivan who have high profiles and are close to Biden, they don’t compare in terms of influence with Donilon.

The London Times reported that insiders say the former pollster, a devout Catholic just like his boss, “seems to know the president better than he knows himself.”

It is a rare ability but also a great responsibility. On what we have seen so far, Irish Mike Donilon seems up to it.