Michael Dowling, the Irish CEO of Northwell Health, which will host its annual conference on gun violence prevention later this year, wants common-sense rules applied to guns in America. 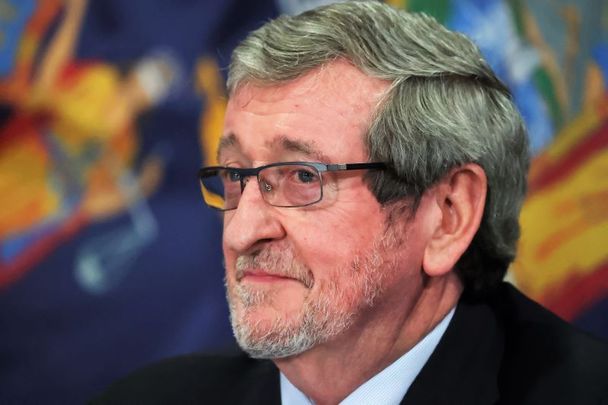 Michael Dowling, CEO of Northwell Health, spent Wednesday morning doing something he never thought he’d have to do - ensuring that metal detectors, like those at airports, be installed in every one of the 23 hospitals in the Northwell system.

The mass shooting in a hospital in Tulsa, Oklahoma, and the school massacre in Uvalde, Texas, have made it necessary to build an extra security feature into every one of Northwell’s New York-area hospitals.

“It's a sad reflection that a place of healing has to be fortified against gunmen,'' Dowling said.

But Dowling, a Co Limerick native and head of the massive Northwell chain which has 79,000 employees, is not standing idly by. In addition to extra preventive measures, he will convene a massive conference on gun violence later this year.

The Gun Violence Prevention Forum, set for December 14 this year, is an annual convening of key healthcare and cross-sector leaders to form alliances, drive strategy, and elevate the national conversation around gun violence as a public health emergency.

Dowling believes the horrific nature of the recent violence meant America would finally be forced to return to its senses on gun violence.

"If I want to buy a car I can't purchase one with no seatbelt or airbags," he points out. "Those are sensible government regulations that make sense to everyone.”

Background checks are another obvious one to fix, he says. “A doctor wouldn’t prescribe medicine without knowing a patient’s background and history as a way of ensuring the medicine will cause no harm. All firearm transactions should require universal background checks on buyers – a view supported by the vast majority of Americans.”

Dowling just wants the same common-sense rules applied to guns in all circumstances. The fact that he has long been to the forefront in organizing a countrywide coalition of hospitals and CEOs to take action not just against gun shooters but also in framing the gun ownership issue and making it also about public health issues gives him enormous credibility.

He is not just focused on gun massacres, but guns in general. He says while hospitals have a duty of care to help gun victims, they need to go further and deal with non-massacre shootings, too.

They need to find out the family circumstances of the patient, if he or she is likely to be exposed to gun danger after their release, and what counseling and advice they need to avoid shooting situations and advise them about mental health experts in their areas who can guide them.

He says, in other words, the hospital's responsibility does not stop when a bullet is removed. It becomes a public health issue.

If it becomes a healthcare issue, then "the healthcare industry needs to stand up," he says. Dowling recently wrote that “It is time for healthcare providers to use our collective voice, the power of our lobby, the financial weight of our $3.5 trillion in industry to combat gun violence.”

Dowling was clear he would not participate in the blame game. “It is easy to point fingers at those who stoke the flames of hatred and who provide far too easy access to guns,'' he said.

“It is far more difficult to look at ourselves and admit what we have not done."

There are nearly 40,000 firearms-related deaths each year and we should collectively say “enough is enough,” he says.

Dowling, as always, is at the head of the pack, taking on what has become perhaps the most important domestic issue in a generation. He will not shirk the task as long as there are so many lives to be saved.

“Call it my tough Irish skin," he said, "but I am prepared to battle this to the very end. Americans want gun reform and we'll have to play our part.

"We must all be ready to stand up and be counted not just for us but our children and grandchildren."