The making of Irish Christmas song "Fairytale of New York"

The funny, unlikely, yet popular Irish Christmas song set in New York amidst the ringing bells is a favorite holiday-time duet year in, year out. 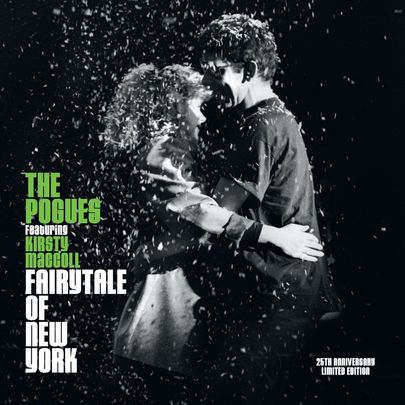 Kristy MacColl and Shane MacGowan photographed for the front cover of The Pogues' Fairytale of New York.

As soon as its time for Irish Christmas songs, we're queuing up The Pogues' "Fairytale of New York"

Only in a favorite Irish Christmas song could you come across lyrics as funny as "you're a bum" and have it set in the streets of New York.

It is the most famous Irish Christmas song ever written, arguably the greatest Christmas song of its generation, and it has only grown in popularity since it was first released in 1987.

The Pogues' "Fairtytale of New York" is a Christmas classic, yet it very nearly never got made.

The song is the story of two down on their luck Irish emigrants in New York around Christmas time. It depicts their stormy relationship but their deep love and affection behind it all.

Described by the BBC in as the “oral antidote to tinsels and sleigh bells,” Fairytale began life as an attempt at a sentimental Christmas song, written by the band’s Jem Finer.

Then lead singer and resident genius Shane MacGowan got in on the act and the song quickly became the most surprising Christmas hit ever, not about Santa and sleigh bells but drunken addicts and Irish immigrants down on their luck in New York.

A Christmas song that opens with a scene in a New York drunk tank seemed an unlikely hit, but 'Fairtytale' was all that and more. It has entered the Christmas charts every year since its release.

Hollywood star Matt Dillon got roped into the video as did the NYPD Irish pipe band impersonating the NYPD choir, which is a main feature of the song but which actually did not exist.

Shane MacGowan was never going to settle for a "feel good" song.  Born in the UK to Irish parents, he had a fierce sense of Irish pride even though it was a very bad time to be Irish in England with the IRA campaign going on.

MacGowan formed two bands, the Nipples Erectors d the Irish Republicans, neither of which lasted long.

The third one proved more lasting. The band was originally called Pogue Mahone, from the Gaelic to "kiss my ass" (póg mo thóin), but immediately became known as The Pogues.

As the band became famous with Shane’s version of Irish folk-punk it soon began eyeing America and the huge Irish American population here. They made it to America in 1985 and played their first gig on 2nd Street in the East Village. They were an immediate sensation.

Matt Dillon, who was at their first gig, later told a BBC documentary crew that “I really liked them, they reminded me of a mixture of The Dubliners, The Clash and The Clancy Brothers.”

In the summer of 1987, the group decided on a Christmas song and Finer and MacGowan began working on it.

They had been watching the movie “Once Upon a Time in America” over and over about the American dream and immigrants and it heavily influenced them.

The title "Fairytale of New York" came from a JP Donleavy short story of the same name. Shane says the inspiration for much of the haunting lyrics came from a period when he was delirious, recovering from pneumonia in a sanitarium in Sweden.

The band had lost their main female singer Cáit O'Riordan, who had left to marry Elvis Costello. So Kirsty MacColl, married to the album producer Steve Lillywhite, filled in.

The video was shot on location in New York, with Matt Dillon playing a cop who arrests MacGowan for drunkenness. It was filmed in an actual police precinct but almost canceled because Shane and others in the band had too much to drink. Dillon, however, intervened on their behalf.

The NYPD choir is really a group of NYPD pipe and drum band members who were feeling no pain themselves when they showed up for their role near Washington Square Park on a bitterly cold night. They were supposed to be singing "Galway Bay" but did not all know the words, so they sang the theme to Mickey Mouse instead.

Either way, what emerged was a Christmas classic, perhaps one the greatest of all time.

It has also stood the test of time and is as famous and sought after today as it was when it was released in Christmas 1987.

Ironically, it never made it to No. 1 on release, finishing second in Britain to a Pet Shop Boys number, now long forgotten.

Is "Fairytale of New York" your favorite Irish Christmas song? Let us know about the songs you like to hear the most during the festive season.