"Despite... Irish citizen, Irish critics, and reporters seemed to go out of their way to identify Donleavy as an American author." 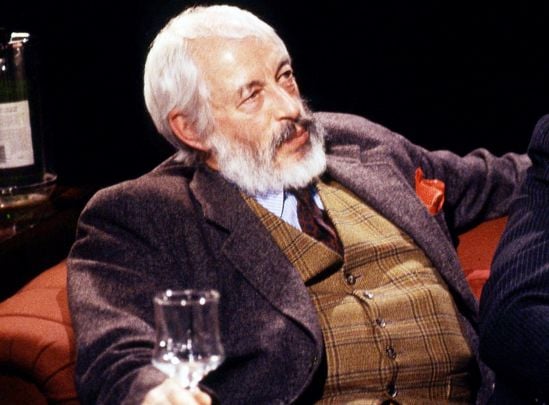 Bill Dunn, author and friend of Donleavy asks the all-important question about the great writer. Was this one-off one or the other?

The writer and playwright J.P. Donleavy, according to his dust jacket bio, was “born in Brooklyn, raised in the Bronx and educated at Trinity College Dublin”. The middle child of Irish immigrants, James Patrick was called Jim by his fireman father from Longford, Junior by his siblings, and Galway-born mother, and Paddy by his friends.

While his parents did not talk much of the old country, Donleavy learned of Ireland from Irish Americans among his neighborhood friends, Fordham Prep classmates and members and coaches at the New York Athletic Club where he was taught to box by famed trainers and referees, Arthur Donovan and Frank Fulham.

Prepster Donleavy stood out immediately but not for a scholarship at the Jesuit-run Fordham. “My tendency was to have a lot to say, if not to inspire rebellion then to incite minor disruptions,” he conceded in his memoir The History of The Ginger Man.

In a punishment essay (misspellings retained), he confessed: “First week of school I was a sincere gentleman, the semester proceeded and I think I was a gentleman in a crude sort of way with a few outbreaks... Maybe I might have talked a little to much but this is my nature and I think I am gifted with a good line of speech or gab. I also like to kid around in class, and so made a couple of minor mistakes but don’t we all?”

Donleavy ran track at Fordham and began writing poetry and short sketches. He was expelled at the end of his third year after founding a secret society of which he made himself Supreme Brother Master, holding the first and last meeting at a saloon, which was reported to the prefect of discipline. Paddy Donleavy finished high school at Manhattan Prep, run by De La Salle Christian Brothers, graduating in June 1944.

With World War II raging, he then enlisted in the U.S. Navy. After basic training, Donleavy sat exams, winning an appointment to the Naval Academy Preparatory School in Maryland, from which top students go onto the U.S. Naval Academy at Annapolis. In the NAPS library, Donleavy chanced upon books on Ireland in which he got his first glimpse of Dublin - with images of O’Connell Street, the Liffey, the countryside, and the Irish Sea. He was intrigued.

With the war’s end, Donleavy and millions of discharged American veterans availed of the GI Bill of Rights, which offered funding for university. Failing to gain admission to any Ivy League school, he asked his mother if there were universities in Ireland. Her three-word response – “Trinity College Dublin” – changed Donleavy’s life. He was admitted for the Michaelmas Term in 1946. Newfound friends quickly nicknamed him “Mike” (his Confirmation name being Michael) to distinguish him from all the Jims and Pats. 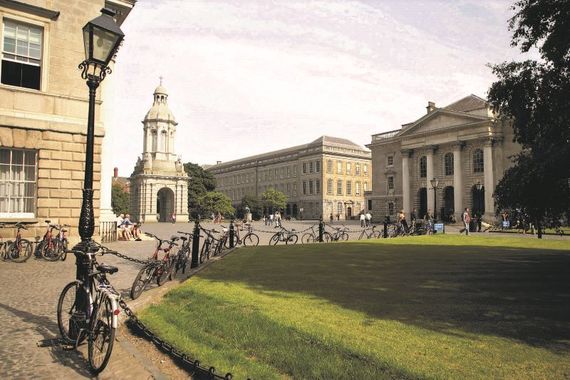 An amorphous, nameless group coalesced, many of them veterans catching up on lost years and local veterans of a different sort, like Brendan Behan, out of the IRA. They created a bohemia centered in the pubs off Grafton Street, after-hours nightspots like the Catacombs on Fitzwilliam Square, and in literary salons. There were aspiring writers and painters in the group, including Donleavy who was painting and writing but not studying much.

He sensed this exciting time couldn’t last and the collection of colorful characters would scatter. So he began taking notes on conversations, incidents, observations. He was doing field research for The Ginger Man, a fictional re-creation of bohemian Dublin, centered on Sebastian Dangerfield, a feckless charmer who sails dreamboats on rough seas of reality without sinking. Dangerfield has a talent for extracting credit in pubs and seducing women. His foil, Kenneth O’Keefe, is a brilliant speaker of blunt truths and neurotic who can’t score with women. Both characters were based on fellow Americans at TCD.

Donleavy began The Ginger Man in mid-1951 after a London gallery rejected his paintings. Donleavy recalled in his memoir: “I announced to the street that, goddamnit, seeing as I was contemplating it anyway, I would write a book that no one could stop and would make my name known in every nook and cranny.”

He began his debut novel at his Kilcoole Cottage, continued it on the Isle of Man, and then America, before settling in London. Published in June 1955, the book has never been out of print in English and has been translated into two dozen languages. The book has made Donleavy famous around the world, even in Ireland where it was banned until 1981. Publishers who had rejected him were begging him for his later works. 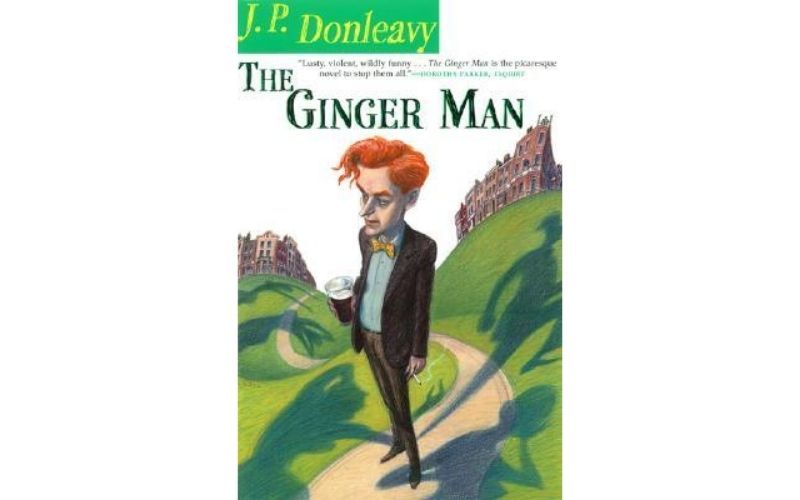 Cover art for The Ginger Man by J.P. Dunleavy.

In 1969, even while Ireland still banned The Ginger Man, the nation welcomed him back, as he became an Irish citizen and an early beneficiary of the Artists’  Tax Exemption scheme. In 1973, he bought and moved to Levington Park, built in the 1740s, on a hilltop overlooking Lough Owel outside Mullingar. He would live the rest of his life there, writing, painting, and farming. He had a herd of beef cattle grazing 180 acres.

To date, 28 books by Donleavy have been published, including 14 novels. Ireland was the inspiration and setting for six of those novels, and figures prominently in two memoirs, and in A Singular Country – and impressionistic analysis of Ireland in the early years of the Celtic Tiger. Ireland also appears throughout his collected correspondence.

Despite that and his being an Irish citizen, Irish critics and reporters seemed to go out of their way to identify Donleavy as an American author – seldom as an Irish author. Donleavy himself puzzled over his identity. “No identification any longer fits,” he explained in a 1986 Publishers Weekly interview with Amanda Smith.

“I’m Irish in terms of blood – both parents born in the country – and I’ve become an Irish national citizen. But never can anyone ever remove that American business – it’s so indelible.”

J.P. Donleavy died 11 September 2017, age 91. The Ginger Man is still going around the world, as Brendan Behan said it would, and was published last year in Mandarin. His correspondence with friends who inspired the main characters in The Ginger Man was published by Lilliput in 2018, as The Ginger Man Letters. And this past fall Lilliput published A Letter Marked Personal, the last novel Donleavy completed.