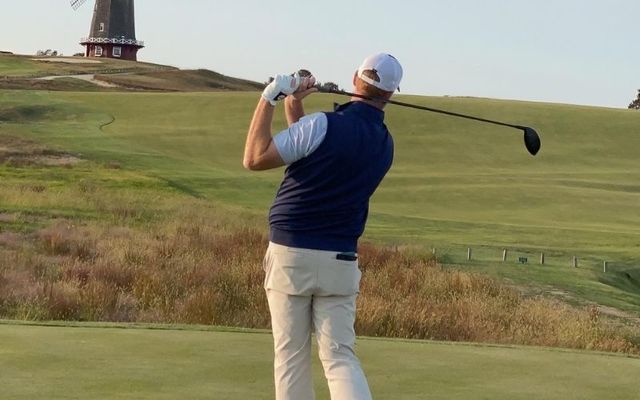 Tom Coyne during his search for the perfect American golf course. Tom Coyne

New York Times best-selling author Tom Coyne spent months traveling the country and playing on every course to ever hold the  US Open as part of his newly-released book "A Course Called America: Fifty States, Five Thousand Fairways, and the Search for the Great American Golf Course".

Coyne's latest book also takes him to more than 200 hidden gems throughout the United States as he searches for the great American golfing experience.

His journey begins at the historic Newport Country Club in Rhode Island, which hosted the first-ever US Open, and takes him to courses in the Sandhills of Nebraska and the heart of the Navajo Nation in the span of one unforgettable year.

Coyne told IrishCentral that he crowned the quintessential American golf course at the end of his journey based on his own estimations.

He said that most readers will probably be unfamiliar with his choice of course.

"It was my Great American Golf Course. I won't say what it is, but it's a place that most people would be unfamiliar with and will discover for the first time in the book. I hope readers feel like it wasn't somewhere too obvious," he told IrishCentral.

Coyne said that the quintessential American golf course should be "a bit of a rebel" and said that it should "never take the easiest path".

"It should be stuffed full of hope. That's what I think America should be."

Coyne's latest release is his third entry in a golfing trilogy that began in Ireland more than a decade ago.

Released in 2009, Coyne's "A Course Called Ireland" was his account of a four-month journey across Irish golf courses "search of a country, a pint, and the next tee".

Not only did Coyne take on 55 golf courses along the Irish coast over the four-month spell, but he also walked the distance between each one, covering more than 1,100 miles on foot.

"We came up with the idea of trying to play Ireland as one giant golf course," Coyne said. "We decided to walk it because you don’t play golf in Ireland with a golf cart, you'd walk.

"It was a wonderful way of living and a wonderful four months in Ireland. My whole world was on my back. I had a very simple plan - walk, golf, eat, sleep. I was in this beautiful country surrounded by these great people. It was a very nice way to live."

The book rocketed to the top of the New York Times' best-selling charts and its success "changed a lot of things" for the young writer.

Coyne said that his decision to play Ireland as one "giant, beautiful golf course" allowed him to discover the country in a way that regular tourists simply couldn't.

"It allowed me to see the entire country - north and south - and it allowed me to get to know Ireland in a way that travel writers might not always get to. I was stopping in places where you wouldn't always stop because I had a 20-mile leash - I could only walk so far.

"I was staying in places where they were surprised to see an American walking into a pub."

Coyne, who has roots in County Mayo through his great-grandparents, crowned Carne Golf Links in Belmullet as Ireland's greatest golf course and said that his time on the course was one of the highlights of his four-month trip.

"It was a highlight. My parents came out to visit. We tried to track down some family roots in neighboring towns. It was a special time; playing Carne with my dad was pretty great.

"I fell in love with Belmullet the first time I visited. I just love everything about Carne - the people, the dunes, the natural feel of it, the masterpiece that Eddie Hackett there.

"Whenever I'm planning a trip to Ireland for Americans, I try to get them to visit Carne. It's a beautiful part of the country."

"I learned my lesson in Ireland," he joked.

However, he said that his follow-up releases still allowed him to explore hidden gems in Scotland and America in ways that regular tourism didn't. Coyne strongly believes that golfing holidays are one of the best ways people can immerse themselves in an area's traditions and people.

"If you're traveling on your own, golf is the best way to do it. You'll get put into a group with locals, so you'll get to know the people and the area, spending four hours hanging out and talking with strangers. What other way are you going to do that as an adult married person? It's pretty great that golf lets you do that.

"You take in a lot of sites during the travel between different golf courses. It's great to go see the Cliffs of Moher and then go play a round in Lahinch. For me, that's a pretty great day."

Coyne's latest release is available to buy from all major bookstores.