Joe Biden is not getting enough credit for baiting President Donald Trump and causing his meltdown before 100 million people. 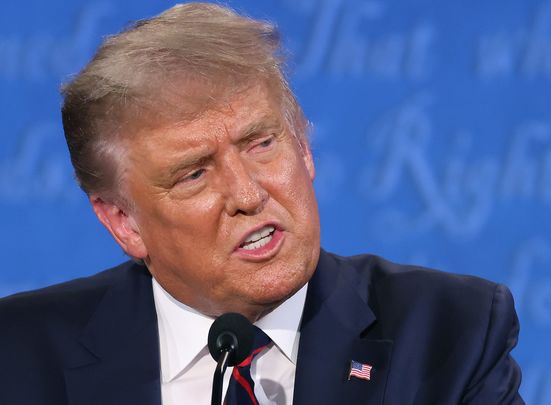 Joe Biden is not getting enough credit for baiting President Donald Trump and causing his meltdown before 100 million people.

In this 2020 version of “Game of Thrones,” the old warrior proved that bluff and bulls**t only gets you so far. From the opening maneuver, Biden had his measure.

This debate will be remembered only for Trump’s refusal to disavow white supremacists. Not since President Woodrow Wilson in 2015 called Blacks an” inferior and ignorant race" has such a shameful racist message come from a White House occupant.

The Proud Boys are celebrating after last night’s debate... https://t.co/AJAWN2OCVa

Biden kept his cool and ridiculed Trump, the one thing certain to drive the egomaniac president wild. The CNN survey of debate watchers showed Biden winning by 60 percent to 28 percent.

By calling him the worst president in history, calling him a clown, calling him racist he unleashed the dark side of Trump which always lurks right under the surface.

Suddenly, instead of being on offense, Trump was just offensive. Once upon a time, his antics dragged you in, now he’s a beaten docket.

Trump unplugged was not a pretty sight; he was “too hot” as a former governor and senior Republican Chris Christie stated. He was so hot he could have auditioned for the title part of the movie “Raging Bull”.

At times the President acted like a character out of the circus, just lacking a clown suit jeering and heckling and making faces at his opponent. The office of the presidency was demeaned by such antics.

Biden staked out his own persona, referring to himself as an “Irish Catholic” working-class guy who was raised in Scranton far from the gilded hallways of Trump’s Queens mansion.

Biden went into the night needing a solid performance He delivered that despite intense efforts by Trump to taunt him.

Indeed, it was clear that Biden had succeeded in unsettling his opponent, with Trump acting like a spoilt child and trying to bully Biden who for the most part held his cool.

Biden also certainly came across as more likable, which was an important distinction and set Biden up as the more authentic of the two candidates, who was far better placed to understand the travails of the ordinary American, especially at this fraught time.

Meanwhile, Trump’s embrace of the racist “Proud Boys” will be what this debate will be remembered for and it will truly hurt Trump politically.

There should be no early Biden celebrations, however. Trump has been written off before and come bouncing back.

In the words of Shakespeare, he has “scotched [injured] the snake not killed it.”