Michael Higgins, the new president of the American Irish Historical Society, says there is a dire need for change and that the society's Fifth Avenue headquarters is "unsuitable." 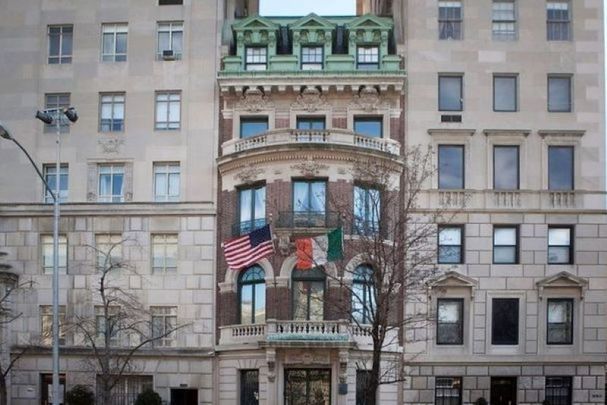 The American Irish Historical Society's (AIHS) newly-elected President General is pushing ahead with plans to move the headquarters out of Manhattan and sell the existing Fifth Avenue location which has been priced in the $44 million range.

He claimed many Irish were ashamed of Irish Americans and cringed at their activities.and said the move was done  in part to create a better image.

Michael D. Higgins, Jr, a diplomat at the UN and complete unknown in the community until taking over the presidency of the AIHS in recent months, says there is a dire need for change as “many Irish are ashamed of Irish America.”

“I know many Irish people cringe when they think of Irish America and the tedious efforts to promote a hagiographic and triumphalist portrayal of everything Irish," Higgins said in a letter made public this week..

Higgins has become President General of the AIHS amidst fierce opposition to the sale of the Society's headquarters by Irish American groups. An online petition objecting to the sale has gained more than 41,000 signatures.

The New York Times has also run a major feature on the legal and financial battle underway between the society and many Irish who want a completely new board and proper oversight.

New York State Attorney General Letitia James is still investigating the financial records and interviewing board members after issuing subpoenas. The AIHS is a non-profit and cannot be sold unless approval is received by the Attorney General.

Higgins is organizing an advisory panel in Ireland and America in order to provide a new focus for the AIHS he states in a letter.

In his letter, Higgins discusses how the new advisory panel will work, omitting the fact that until the Attorney General has ruled, there can be no official appointments.

Higgins envisions the "Historical and Cultural Advisory Panel" as an "informal group the AIHS will be able to draw upon as a sounding board and source of wisdom as we develop our future plans and activities.

"It is a broad-based and inclusive group which includes renowned historians from Ireland and the US, as well as artists, scholars and experts on culture, community relations, social, environmental, equality and human rights issues. I have attached the list of panel members."

Elsewhere in his letter, Higgins sees himself as inheriting the spirit of Robert Emmet in his desire to change the Irish in America.

"I see my own mission, in keeping with the spirit of Robert Emmet, to vindicate the character, motivations, and experience of the amazing people who have found themselves consigned to 'repose in obscurity in peace.'"

Higgins states in the letter: "We are in the business of refreshing our board and I am seeking to ensure that the new composition should be much more inclusive, diverse and contemporary of its composition and feature cultural and historical figures, rather than the usual overabundance of financiers and lawyers."

(Four senior board members resigned after the plan to move the AIHS upstate was announced.)

He says the AIHS "has also, nevertheless been an amazing platform for Irish scholars, artists, and writers to find success in America.

"For my own part, I'm going to try and make the Society return to its roots and focus on its contribution to historiography rather than hosting the elite social events it is associated with at present."

He doesn't note that the elite social events were mostly hosted by the Cahill family. Doctor Kevin Cahill, a leading physician, was President of the society for over 40 years and was often accused of arrogance by Irish Americans worried about the future of the building and the society.

Higgins says all that elitism will be swept away. "I personally feel there's a frozen and sacralised version of Irishness in America which is doing a disservice to both Irish and American people."

Higgins wants to place a new focus on "telling the story of the Irish in America to encompass the fascinating relationships and shared moments between Irish women and men with African Americans, Native American, Puerto Rican, Mexican, Chinese and so many other people and communities.

"I think it is time for Irish-America to acknowledge that it was both complicit in and resistant to injustices."

Higgins also addresses in his letter the plan to sell the society's headquarters and relocate to upstate New York.

He wrote: "It would not be fair of me (not) to mention that a certain pall of controversy sits over the society due to a period of turbulence in the past and the decision to sell its very beautiful headquarters on 5th Avenue.

"While I understand the sadness over the sale of the building, ultimately it is very unsuitable as a scholarly location, and the proceeds will ensure that the Society will be incredibly well endowed....and all that money - without any compromising donor involvement - will be very much dedicated towards the pursuit of historiography and the generating of new forms of cultural expression."