Michael D. Higgins, Jr, son of the Irish president, has been elected the new President-General of the American Irish Historical Society, which is discussing moving upstate to Cooperstown, New York. 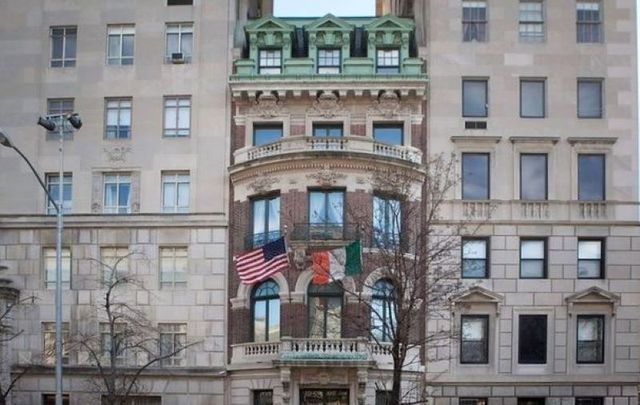 In a shock move, the American Irish Historical Society (AIHS) may abandon NYC for Cooperstown, New York. Several of its board members have resigned, with Michael D. Higgins, Jr, son of the President of Ireland, being elected unopposed as the new President-General.

The American Irish Historical Society board's discussions to move to Cooperstown, some 200 miles from Manhattan with a population of less than 2,000 and home to the Baseball Hall of Fame, is an utterly unexpected turn of events.

The news comes about a year after the society's headquarters at 991 Fifth Avenue, owned by the AIHS for decades, was put on the market for $52 million, much to the dismay of many in the Irish American community.

A spokeswoman for the society said at the time of the announcement of the sale: “The decision to place the building on the market has been made in order to best enable the Society to pursue its cultural and scholarly mission in a sustainable manner.”

The AIHS headquarters being put on the market galvanized many in the Irish community who claim the AIHS has been badly mismanaged for years and that the current leadership must go.

The online petition also drew the attention of the Attorney General of New York, who is now investigating the AIHS. It is believed that some members of the AIHS have received subpoenas.

Four directors, including the in situ President-General, have now resigned in protest at the idea of losing the Gilded Age mansion opposite Central Park and the Metropolitan Museum of Art and moving upstate to Cooperstown. The resignations occurred during a meeting that was conducted via Zoom.

Among the board resignations are attorney Maureen Bateman, who has served on the board for decades, and law professor John Feerick of Fordham.

Also resigning is Guy Smith, former Executive Vice President of Diageo, who was the public face of the society. His was a surprise resignation, given how strongly he defended the American Irish Historical Society board and its actions when the plan to sell was announced.

The fourth person to resign is Tom Moore, a top attorney and leading lawyer in New York and Waterford native who is very active in philanthropy in the community.

Higgins, Jr has been elected as the new President-General of the AIHS unopposed. He will be faced with taking over the reeling AIHS, a non-profit that is subject to state oversight.

Over the years, many prominent Irish Americans who joined the board sought to create change from the inside, but all were doomed to fail.

While Higgins, Jr is scarcely known in Irish American circles, his father, President of Ireland Michael D. Higgins, is a very popular figure among Irish in America and a long-time friend and advocate for Dr. Kevin Cahill, who led the AIHS for 40 years and who remains a powerful figure in the AIHS even at 86.

Critics have claimed the Cahill family has far too much control of the society, that mismanagement had occurred, and that a thorough investigation of the non-profit was warranted.

Higgins, Jr being named the new President-General may lead to a clash with the Irish government which has donated close to $1 million to the society and has made clear it wants the society to retain its Fifth Avenue headquarters.

In the interest of full disclosure, Niall O'Dowd is a former board member of AIHS.