Five of the last ten House Speakers have been Irish-American, but who has been the best and worst of them? 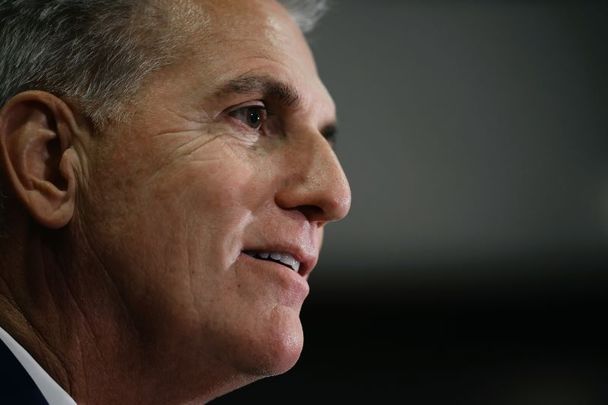 November 15, 2022: House Minority Leader Kevin McCarthy (R-CA) talks to reporters after the House Republican Conference voted for him to be its nominee for Speaker of the House in the US Capitol Visitors Center in Washington, DC. McCarthy was elected leader of the caucus, paving the way for his election to Speaker of the House if the GOP wins control of the House of Representatives. Getty

With the election of Kevin McCarthy as speaker of the House of Representatives, five of the last 10 speakers have been Irish American.

The five differed greatly in their competence and interest in their Irish heritage.

The worst was undoubtedly Foley from Washington State who rarely missed invites to the British Embassy and was a complete Anglophile. He tried desperately to prevent President Clinton from giving Sinn Fein leader Gerry Adams a visa to come to America in 1994, haranguing the president to the last minute.

Foley never admitted he was utterly wrong on that call as subsequent events bore out, but safe to say he did little good for Ireland and was much more comfortable doffing his hat to the Queen.

The best was O’Neill, an old-fashioned Irish pol out of central casting. He wanted to do more for Ireland but was constrained by the Irish government at the time and urged to see Irish Americans, not the British, as the major problem.
I put a question to him once, if he regretted not taking more of a stance and he shot right back, saying, “How do you expect me to out-republican the Irish government?”

Fair point. He was also stymied on immigration, telling the Irish government he could create a set aside for Ireland in a visa bill. The government at the time told him not to bother, that Irish immigration to the U.S. was waning because of better economic times.

O’Neill, a Democrat, enjoyed a warm friendship with Ronald Reagan despite deep policy differences, a concept that is alien today.

McCormack was born in 1891 into extreme poverty, one of 14 children. His father deserted the family and hit rock bottom later in life, buried in a pauper’s grave.
McCormack never forgot his family's pain and suffering and was a fierce defender of Roosevelt’s New Deal and President Johnson’s fair society agenda. He was briefly first in line for the presidency after President Kennedy was assassinated and there was no vice president as Johnson had moved to the top job. He was the first Catholic speaker.

Ryan was the reluctant speaker, prevailed upon to take the office despite his love for policy as opposed to bare-knuckle politics. He was chosen as a compromise candidate when the main candidate, none other than Kevin McCarthy, was considered not up to the job.

Ryan only lasted two years in the hothouse the House had become after the earlier years of Newt Gingrich’s scorched earth policy against opponents. Ryan was a centrist in a party diving to the far right.

Which brings us to McCarthy, the new speaker whose elevation was opposed by the extreme right-wingers who pass for politicians in the House today.
It remains to be seen how he fares. Will President Biden be calling him up to come visit the White House and exchange old Irish jokes as Reagan did with O’Neill? Hardly. Watch out too for McCarthy’s ability to mangle the British language at least as well as Biden does on occasion.

Never has a speaker led a Congress as the head of such a divided party. It remains to be seen if McCarthy can claw back some much-needed authority from the crazies in the months ahead.

I would not hold my breath. America is headed for a confederacy of dunces on the GOP side.