Donald Trump has made us the Ugly Americans once again

The world is in fear about what has happened to the leader of the free world in just three months. 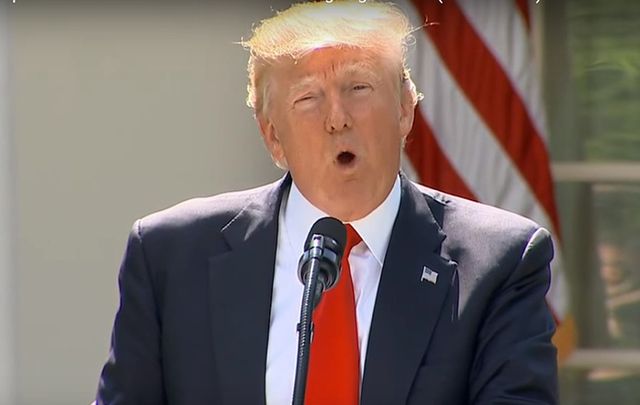 “The Ugly American” was a highly influential 1958 novel that depicts America’s failure to win hearts and minds across Southeast Asia which the authors predicted, correctly, would lead to disaster in Vietnam.

John F. Kennedy was so impressed with the book that he sent it to every senator from both parties.

It is time to dust off the covers again and send copies to every member of Congress, especially Republicans, so they can see what they are doing to themselves and this country with this president.

Yesterday, in the glare of sunlight in the Rose Garden as he made his craven announcement, Trump looked and sounded like a demented old man railing King Canute-like against the advancing waves (see full video below).

Donald Trump claimed other countries were “laughing at America” and, therefore, he was pulling out of the Paris climate change accord. They are laughing no more, he said.

The people laughing are the polluters and carbon monoxide producers who will be still laughing when they get to the bank.

Also laughing at America are Trump’s beloved Russians, who have ensured that chaos had become the daily staple in the White House as the clumsy attempt to cover up the involvement of Russia in winning Trump the White House continues every day.

This latest breach with the world order will cheer Vladimir Putin and friends enormously. The “Amerika Project” is working very well.

In fact, most of the world is now left in fear about what has happened to the leader of the free world in just three months since Trump took control.

He seems to view the world as unremittingly hostile to the US. Old Allies like Germany are trying to exploit us, NATO which had kept the peace for 70 years (remember the two world wars pre-Nato?) is disposable because some countries owe money. The Australian Prime Minister is harangued, the pope to be ignored on climate change.

What does he think this is, a game of schoolyard bully? America can’t win if other countries win too? Are there only winners and losers? What about win-win for the planet by tackling global warming and pollution?

We now stand with Syria and Nicaragua as the only three countries that refused to sign (Nicaragua because it did not go far enough). So, it's just us and Syria, and good old mass murderer and chemical weapons user Bashar Al Assad.

What happened to the country that unselfishly created the magnificent Marshall Plan after World War II and restored Europe. Now we have a charlatan trying to tear it all apart.

Does he have any comprehension of how much he is damaging America’s vital interests? Does he not realize how important the position of world leadership is?

Meanwhile, dictators in Saudi Arabia and Egypt and the like and mass murderers like Duterte of The Philippines are to be praised. American values are upside down. Little wonder that the great American experiment looks more like a Dr. Mengele botched operation at present than a grand design.

Denying climate change flies in the face of every iota of scientific evidence, not to mention clear visual realities such as the melting of the polar caps. But this is becoming the game: deny real news and call it fake, deny climate change and call it fake, deny judges because they don't rule in your favor, deny, deny, deny, attack, attack, attack, hollow out the very centers of the greatness of America

“In itself, climate-change denial is not stupid. It is much more evil than that...” wrote Fintan O’Toole in The Irish Times. We have Dr Evil in the White House it seems, backed up by a coterie of flim-flam merchants ready to peddle any nonsense he spews.

God help us all.