"The notion of allowing Gerry Adams into America or talking to the IRA was a bridge too far the British made clear.-even though they were doing it themselves." 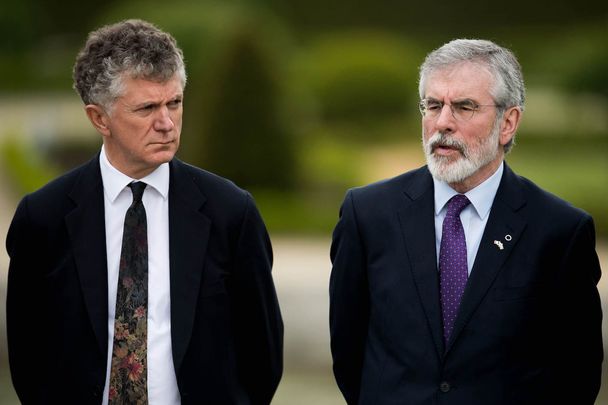 The fire and fury of the British government when the United States granted Gerry Adams a visa to come to America in January 1994 was something to behold.

Details of it are contained in the release of early 1990s cabinet papers in Britain and Ireland this week.

The notion of allowing Gerry Adams into America was a bridge too far the British made clear. No contact with the IRA by any responsible party should occur.

What the British never revealed was the "Big Lie" - that they were secretly talking to the Irish Republican Army (IRA) throughout the time they were haranguing every other participant, the US, and the  Irish Republic, for even thinking of going there.

It reads: "The movement in which Gerry Adams has long been a leading figure has murdered not only thousands of its own countrymen but also one member of our Royal Family, one Cabinet Minister's wife, two close advisers to Margaret Thatcher and Members of Parliament, two British ambassadors - and small children in our shopping centers."

"He has been closely associated with terrorism for two decades. In the Joint Declaration, he was offered a route into the democratic process, and into negotiations with us and with the Irish Government. He and his movement have not taken it.”

"As you will know the evidence is that the IRA intend to continue their strategy of terrorism, and do not have courage to make peace and compete in the democratic arena."

The Lyme reaction was typical.  Cabinet Secretary Robin Butler stated, "what hurt the British most, in this case, was the failure of the American administration to accept the advice of the British government in the matter.” No talking with terrorists was the clear line in the sand.

That policy certainly had an impact. The Irish government for the day led by Albert Reynolds quietly maneuvered in favor of the visa but cabinet papers show they were in dread of being accused of opening contact with IRA figures and  earning the wrath of the British.

Except the British were carrying out their Big Lie throughout the period, while warning America and Ireland to stay away from the untouchable IRA.

Yet, they were continuing  secret contacts with them throughout all the time they were allegedly “apoplectic” about American politicians meeting Adams,

Jonathan Powell, Tony Blair’s press officer, in his memoir “Great Hatred, Little Room” stated that a ”Derry businessmen, Brendan Duddy, and a series of MI5 and MI6 officers risked their lives to allow the British government and the IRA leadership to communicate in private..”

Powell wrote, "Luckily for this process, the British government's back channel to the Provisional IRA had been in existence whenever required from 1973 onwards."

The complete failure of the British to admit this undeniable fact makes their sound and fury at the time of the visa just empty puffery. It was deliberately concealed and a fake righteous indignation manufactured to make the facts appear otherwise.

Thankfully, as we see from the cabinet papers Clinton withstand the pressure and granted the visa despite the furious pressure.

It was just another example of how the British wanted it both ways on Ireland when it suited.