EU, Britain, and Irish government must not be held hostage by DUP who continue to say “No” despite writing on the wall. 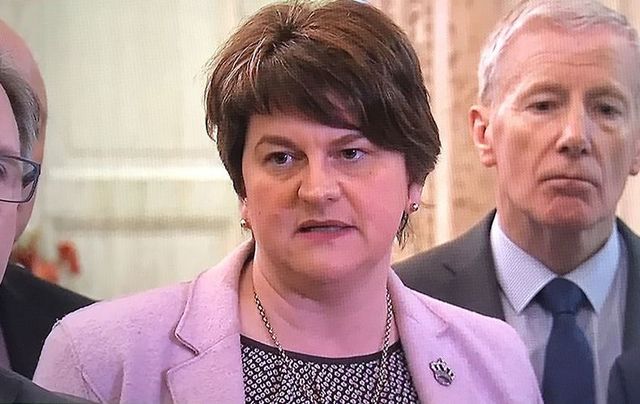 EU, Britain, and Irish government must not be held hostage by DUP who continue to say “No” despite writing on the wall

If Edward Carson, the father of modern Ulster unionism, were to make a miraculous return to Earth he would find himself back on very familiar territory. In his heyday – between 1910 and 1921 – Unionism played the “orange card”, threatening rebellion and warning of sectarian slaughter if their wishes to create a separate state were not granted.

Their wishes were always granted, which is why we have partition and a border in Ireland. Now the single biggest challenge to that border is once again drawing forth the “orange card”. This time it is being played by Arlene Foster of the Democratic Unionist Party (DUP) who is refusing to allow European Union (EU) regulations to govern all of Ireland as they do now.

The EU has told Britain they will not go ahead with Brexit negotiations until the Irish border question is settled. For a few hours on Monday it looked like it was settled until unionists, once again, used their veto.

Foster says Northern Ireland cannot go a different way than the rest of the United Kingdom (UK) and, as her DUP colleagues hold the balance of power in the House of Commons, she can bring the government down. That is called the “orange card” and after Theresa May had reached agreement on Brexit and Ireland with the EU on Monday the DUP shot the deal down.

The reason for today’s failure in the Brexit talks is the grubby deal the Tories did with the DUP after the election. Each passing day provides further evidence that @Theresa_May’s Government is completely ill-equipped to negotiate a successful deal for our country.

Carson would be pleased, but Foster is spreading some strange untruths. Far from being in lockstep with the rest of the UK on governance, which she claims, there are many and significant differences between the different jurisdictions. Having a different arrangement has been a way of life in the North. All the EU deal does is recognize that.

Abortion law is different, and blasphemy is still a crime. Northern Irish money is not accepted in Britain, the list goes on. Therefore, applying EU law and allowing the vexed issue of a hard or soft border to be settled seems a no-brainer.

Not for the Doctor No’s of Unionism however.

They also ignore the fact that the majority in Northern Ireland voted to stay in the EU and the DUP was in a minority, but then as Carson would tell you, democracy has little to do with it.

The DUP’s “No” puts it up to Theresa May to find a deal or put the rest of the Brexit negotiations between Britain and the EU in jeopardy.

Ulster may continue to say “No”, but the combined might of the EU and Britain, plus the Irish government needs to have their say and not be held hostage.

"Northern Ireland must leave the EU on the same terms as the rest of the UK, we will not accept any form of regulatory divergence" - DUP leader Arlene Foster on #Brexit talks https://t.co/VKDYRXgOLk pic.twitter.com/e0FqI0NDq0