DUP’s Arlene Foster said “We will not accept any form of regulatory divergence which separates Northern Ireland” from the UK. 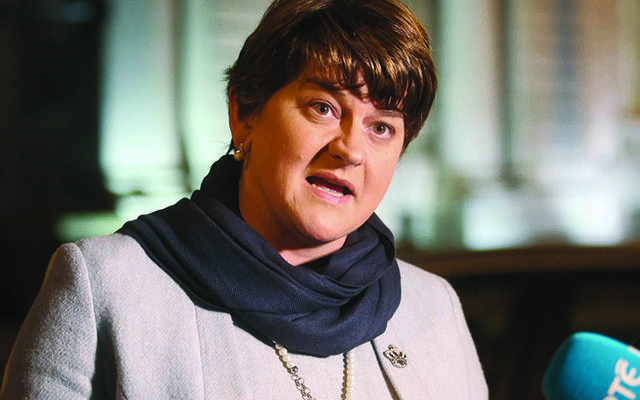 Unionists has reacted with shock and anger to the deal apparently agreed between Britain and Ireland on Brexit which apparently keeps the European Union freedom of movement on the island of Ireland of goods and services and creates a soft border.

Speaking at Stormont the Democratic Unionist Party leader Arlene Foster said “We note the speculation emanating from the European Union exit talks regarding the Republic of Ireland and United Kingdom border.

"Her Majesty’s Government understands the DUP position.  The Prime Minister has told the House of Commons that there will be no border in the Irish Sea. The Prime Minister has been clear that the UK is leaving the European Union as a whole and the territorial and economic integrity of the United Kingdom will be protected.

"We want to see a sensible Brexit where the Common Travel Area is continued, we meet our financial obligations, have a strictly time limited implementation period and where the contribution of EU migrants to our economy is recognized in a practical manner.

Earlier the DUP's Jeffrey Donaldson told reporters: "That is not our understanding of the UK Government's position."

We will not accept any form of regulatory divergence which separates Northern Ireland economically or politically from the rest of the United Kingdom. pic.twitter.com/uCBVdfVQTJ