Finding a middle ground on abortion rights in Ireland

For most Irish people, simply insisting that it's always a woman's right to choose without any legal restrictions is not an adequate position on this very difficult question. 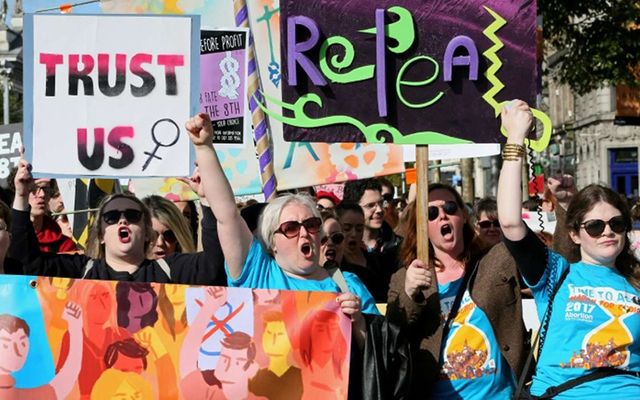 Marchers at the pro-choice rally in Dublin on Saturday. RollingNews

The debate is set to be fierce between pro-choice and pro-life groups ahead of the abortion referendum in Ireland in 2018.

Tens of thousands of demonstrators marched through the streets of Dublin last weekend in a mass protest supporting the introduction of abortion in Ireland.  The vast majority of the marchers were young women, my own daughter among them, wearing her black Repeal t-shirt.

What the marchers want to be repealed is the Eighth Amendment to the Constitution in 1983 which gave an unborn child and its mother an equal right to life. This copper-fastened the illegality of abortion in Ireland except in the most extreme cases in which the mother's life was in imminent danger and saving her meant the unavoidable loss of her child, an unintentional, secondary consequence of the intervention.

Of course, abortion had already been illegal in Ireland, but there were concerns that a more liberal attitude to abortion in other countries could lead to change here.  What the 1983 amendment did was to prevent any law being introduced to change our prohibition of abortion without the consent of the people in another referendum.

It allowed Ireland to continue its disgraceful pretense that abortion was not required here when the reality was -- and still is -- that thousands of Irish women go to Britain every year to have their abortions there.

Read  more: Ireland will hold an abortion referendum in 2018

Recent minor modification of the rules for abortion here (mainly to do with threatened suicide) has meant little difference to that hypocritical situation, and thousands of Irish women still travel to the U.K. for abortions every year.  And it is the absolute determination to change that shameful situation which was at the heart of last Saturday's mass march in Dublin.

The mood among the marchers was jubilant since they believe the time is now right to move on abortion here in the wake of the successful vote in 2015 to legalize same-sex marriage in Ireland.  That vote was clear evidence that Ireland has changed. The population is younger, more liberal and diverse, and the influence of the Catholic Church has declined.

The government-appointed Citizens Assembly gave the government a mandate to legislate for abortion. Image: RollingNews.ie.

Aware of this and of the pressure for change, the government established a Citizens Assembly last year to discuss abortion (and other issues like climate change), and its report a few months ago was surprisingly liberal.  Not only did over 70 percent of the assembly's randomly selected citizens support the introduction of abortion here in difficult cases like rape and fatal fetal abnormality.  But 64 percent said yes to abortion with no restrictions, giving women full access to abortion rights similar to the U.K.

No doubt that has given confidence to the pro-choice movement which organized Saturday's march, and to the new government under the socially liberal Taoiseach Leo Varadkar.

But it's not as simple as that.  And anyone who thinks that success is guaranteed is fooling themselves.

It's not that the outrage felt by the marchers -- Keep Your Rosaries Off Our Ovaries -- is unjustified.  Or that they will not mount a powerful campaign in the run-up to the promised referendum on abortion next summer.  It's that the question of abortion is infinitely more complex and more difficult to resolve.

I'm old enough to remember the ferocious arguments among friends and families it led to back in 1983.  The whole country was in emotional turmoil.  As a young assistant editor on the Irish Press back then I wrote an editorial supporting a limited pro-choice position which prompted an outraged response from several bishops with phone calls to the paper!

The church may no longer be the powerful voice it was then, but there is still a large section of middle Ireland which is moderate or even quietly conservative in its views.  It is this silent majority in the middle which will decide the outcome of the next vote on the introduction of abortion.

It won't be the extremes, the pro-choice without any restrictions on one side and the pro-life no matter how difficult the circumstances on the other.  Recent research has shown that those who support these positions are together around 30 percent of the population here.  It's the 70 percent in the middle who will decide, and in the euphoria of the march, it may have been easy to forget that.

It's for this reason that the wording of the proposal that will be put to the people in the referendum next summer will be critical.  If it's simply an instruction to remove the Eighth that will be easy.  If it is to be replaced with a different wording, that will be much harder.

If the Eighth is not to be replaced with another constitutional restriction on abortion, then politicians will need to reassure people in advance of the vote that any change on abortion they will introduce by law in the future will be reasonable and moderate.

That will mean there will have to be a discussion on what a moderate abortion regime might entail.  Will hard cases (like rape and fatal or severe fetal abnormality) automatically qualify for an abortion?

If women can decide on personal grounds, including their own socio-economic situation, what should the cut-off point be?  Should it be 22 weeks gestation (as proposed by 44 percent of the Citizens Assembly) which is just two weeks less than the legal limit for termination in the U.K. at 24 weeks?  Or should it be much less than that?

Inevitably this will lead us back into the angry debate that happened back in 1983 on the point at which life begins.  Is it at the moment of conception, as the Catholic Church and the extreme pro-lifers maintain?  Or is it later when what was a mere cluster of cells becomes a viable baby that can survive outside the womb?  Defining that has become harder in recent years as the medical ability to deal with very premature babies has increased.

There are no easy answers to the abortion debate in Ireland

There are no easy answers to these questions.  Even the fetal abnormality question can be difficult, with a current discussion going on in the U.K. on whether mothers of Down Syndrome babies should be entitled to an abortion even at a very late stage if they request it.

It seems likely that the majority of Irish people will want a reasonable level of protection to be given to the unborn child, which will mean a pretty conservative structure and time limit for any general abortion regime here.

One of the ironies of the present situation here and the pro-life position is that it encourages later-term abortions than would otherwise be necessary.  Planning and making arrangements for a trip (often in secret) to the U.K. for an abortion can add several weeks to the time an Irish woman is pregnant before she gets to have the abortion she wants.  It's worth bearing that in mind the next time you see one of those late-term abortion posters being waved around by pro-lifers.

The fact is that in most countries the majority of abortions are carried out at an early stage of gestation not only in difficult cases like rape but in the very many cases where a woman gets pregnant and then decides for her own reasons that she does not want to have the baby.  If abortion were freely available in Ireland these women would have their terminations carried out several weeks earlier than is currently the case.

The bottom line on this for most Irish people is that simply insisting that it's always a woman's right to choose without any restriction in the form of a legal time limit is not an adequate position on this very difficult question.  That is something that some of the more radical pro-choice supporters need to keep in mind.

Finding a sensible middle ground for abortion in Ireland is achievable, but it will require calm and respect on all sides in the debate that lies ahead.

How would you vote on an abortion referendum in Ireland? Let us know in the comments section, below.