Ireland will hold an abortion referendum in 2018

An Irish parliament committee is currently working on the wording of a referendum to repeal or replace the eighth amendment to the Irish constitution, which places the life of the unborn on an equal footing to the mother. 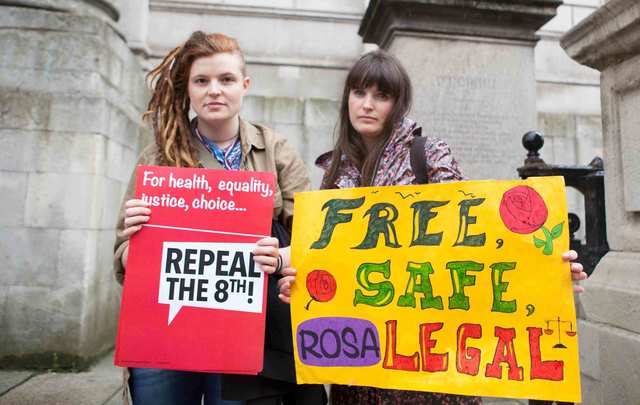 The Republic of Ireland is to hold a referendum on abortion in the early summer of 2018, the government has announced. RollingNews.ie

Irish abortion referendum to be held in May or June 2018, according to Irish Taoiseach Leo Varadkar.

The Republic of Ireland is to hold a referendum on abortion in the early summer of 2018, the government has announced. According to Irish Taoiseach (Prime Minister) Leo Varadkar, the referendum on the eighth amendment will take place in either May or June with no set wording on what the Irish public will be voting on yet established.

In a cabinet meeting today, the government outlined eight referenda is wishes to hold over the next two years including a vote on whether to remove blasphemy as an offense, to extend voting rights to emigrants, to reduce the divorce term, and a referendum on the woman’s place within the home. All eyes were on a referendum on the repeal of the eighth amendment of the Irish constitution, however, which places the life of the unborn on an equal footing to the mother.

What is the Eighth Amendment to the Irish Constitution?

Pro-choice and pro-life groups face off in front of government buildings just a few days before an Irish abortion referendum was announced. Image credit: RollingNews.ie.

Abortion is illegal in Ireland and only allowed if it is shown that the life of the mother is at risk, including at the risk of suicide. The eighth amendment gives Ireland some of the most restrictive abortion laws in Europe, voted in at a time when even contraception was illegal. A woman convicted of having an illegal termination faces 14 years imprisonment.

A 1983 referendum added the eighth amendment to the constitution setting the rights of the unborn child as having equal weight as that of the mother and it was only the high-profile case Savita Halappanavar that led to the introduction of the Protection of Life During Pregnancy Act which allowed for a mother’s right to an abortion when her own life was at risk.

Yet despite this Act, just earlier this year a young Irish girl,  reported to be as young as 14 years old, was admitted to a mental health unit for seeking an abortion even though it was decided that her life was at risk.

“This year we have learned of young children sectioned under the Mental Health Act for seeking abortions, of suicidal women denied access to the abortion they’re entitled to under the Protection of Life During Pregnancy Act because their doctor doesn’t think they’re ‘suicidal enough’,” the Abortion Rights Campaign write on their website.

“We need full repeal of the 8th Amendment in the Republic of Ireland, and proper legislation in Northern Ireland. We need access to free, safe and legal abortion for all who need or want it. And we need it now.”

Are Irish women still having abortions?

Yes, the lack of access to safe abortions in Ireland is causing Irish women to travel abroad or look online for ways to terminate a pregnancy. An estimated average claims that 12 women a day travel to another country from Ireland for an abortion.

Just because abortion is illegal in Ireland is not to say that Irish citizens are not availing of them by other means, added an extra ferocity for the calls to repeal the eighth and provide a safe and legal option for Irish women and families within their own country's borders.

Will this mean that abortion will be completely legal in Ireland?

Pro-life supporters. A referendum on abortion will take place in Ireland in 2018. Image credit: RollingNews.ie.

Likely to be held as a standalone referendum, this vote is set to ask whether the amendment should be removed from the Constitution or amended. The question people will face will be determined by an Oireachtas [Irish parliament] committee examining the Eighth Amendment. They have three months to return to the government with the exact wording of the question.

This means we do not know as of yet whether the eighth amendment is to be completely removed or if it is to be replaced by something else that could determine various levels of access to abortion for women in Ireland.

While some pro-life groups in Ireland are claiming that the repeal movement hope for abortion to be used as a means of contraception or that the pro-choice movement even promotes the use of abortion based on the gender of the unborn, the argument to repeal the eighth is based on the idea that a woman should not be criminalized for seeking an abortion.

Addressing the case of Siobhán Whelan who was forced to travel to England for an abortion in 2010, despite a foetal abnormality that meant her baby had only a three percent chance of surviving outside of the womb, the committee declared that the Irish state had violated the International Covenant on Civil and Political Rights’ prohibition against cruel, inhuman and discriminatory treatment. It also decided that Whelan had not been granted to proper rights to privacy and equality.

In a similar case in 2016, the UN ruled that Amanda Mellet should be compensated by the Irish state for being forced to travel to the UK for an abortion.

How will the wording of the Irish abortion referendum be decided?

Citizen's Assembly. A referendum on abortion will take place in Ireland in 2018. Image credit: RollingNews.ie.

The Oireachtas Committee was initially formed to consider the constitutional issues raised by a report issued by the government-appointed Citizen’s Assembly last April. Published in June, the report reflected the 99-member Assembly’s recommendations on the eighth amendment.

Voting in April, the Assembly gave the Oireachtas (Irish houses of parliament consisting of the Dáil and Seanad) a mandate to legislate on the issue of abortion, recommending unrestricted access to abortion in Ireland by a 64% majority.

The Oireachtas committee is expected to finish their deliberations by December 20.

What are the chances of the abortion referendum repealing the eighth amendment?

A referendum on abortion will take place in Ireland in 2018. Image credit: RollingNews.ie.

The last referendum on abortion in Ireland was only 34 years ago, a relatively short time for the mindset of a nation to change so dramatically. If the marriage equality referendum in 2015 is anything to go by, however, the control of Catholicism over Irish laws is certainly waning as international pressure grows from the likes of the UN to step up and change Irish abortion laws.