The 100-strong Citizens’ Assembly recommended abortion “with no restrictions as to the reason” by a majority of two to one. 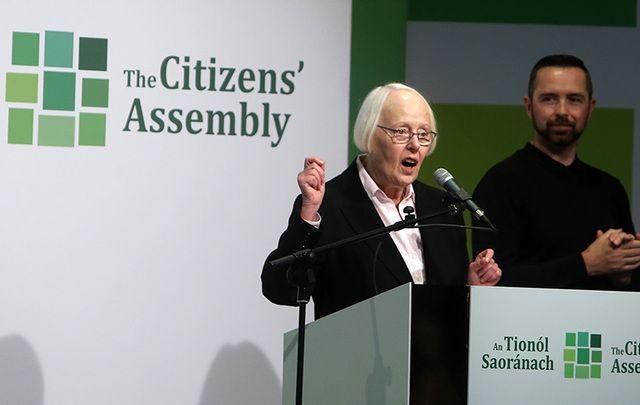 A group of Irish citizens described as representing “the most innovative democracy in Europe” has recommended that every woman in Ireland should have access to legal abortion.

Members of the 100-strong Citizens’ Assembly recommended abortion “with no restrictions as to the reason” by a majority of two to one.

The stunning result came at the final meeting on Sunday of the Assembly which was established in October and gave priority debate to the campaign to repeal the Eighth Amendment in the Constitution which gives an equal right to life to the mother and the unborn, effectively banning abortion in Ireland.

If the joint houses of parliament, called the Oireachtas, accept the recommendation, the government would be fully able to legalize access to abortion for the first time since the 19th century.  Irish women would no longer be forced to travel outside the country for a safe and legal pregnancy termination.

But instead of direct parliamentary action, there is likely to be another national referendum on abortion next year.

The Assembly’s preference for abortion without restriction in Ireland is far ahead of the public on the issue, judging by recent opinion polls.

The most recent Irish Times poll in March showed 28 percent of the public in favor of abortion without restriction.

Tanaiste Frances Fitzgerald has said she believes there should be a referendum on the abortion issue next year.

Niall Behan of the Irish Family Planning Association said the Assembly had provided politicians with “an extremely strong imperative for change.”

Niamh Uí Bhriain, of the anti-abortion Life Institute, said, “The Assembly is not what matters. We already have an assembly – it is called Dail Eireann and at the end of the day the people will vote on the issue.”

The Assembly is drafted from the general public and sat under its chairperson, Supreme Court Justice Mary Laffoy.

When it was established the Assembly was described by European political commentator David Van Reybrouck as belonging to “the most innovative democracy in Europe.”

The Flemish Belgian author of Against Elections: The Case for Democracy said the Assembly proved Ireland was a country that trusted its citizens, instead of fearing them.