The Irish Citizen’s Assembly votes to give a mandate to the government to change abortion laws in favor of the pro-choice movement. 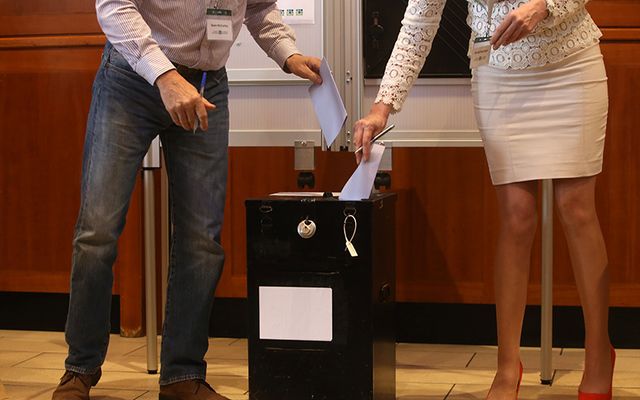 Irish emigrants are gearing themselves to travel #HomeToVote to decide on the future of the Eighth Amendment, the controversial clause in the Irish constitution that effectively bans abortion in the Irish state.

In 2015, floods of Irish citizens living abroad made the journey home to vote on the marriage equality referendum and it is predicted that even greater numbers could be seen pouring into the airports on voting day if an abortion referendum is called. While there is no facility provided for an overseas vote for Irish citizens, those who have emigrated retain their vote for the first 18 months after they leave and are free to return to Ireland to cast it as long as they are already on the register of electors.

Irish Tánaiste (Deputy Prime Minister) and Minister for Justice Frances Fitzgerald said Monday that a referendum could be called next year after a government-selected Citizen’s Assembly last weekend voted on not retaining the Eighth Amendment as is.

The public forum Citizen’s Assembly was established by the Oireachtas to advise the government on a selection of ethical and moral problems within the constitution being faced by the Irish people. Consisting of 99 members in total and including men and women of different ages, from different parts of the country, and from different backgrounds, the Assembly met last weekend to hear testimonies from a range of women about their experience in traveling abroad for an abortion or of their decision not to have an abortion.

Abortion is illegal in Ireland and only allowed if it is shown that the life of the mother is at risk. A 1983 referendum set the rights of the unborn child as having equal weight as that of the mother but the battle has raged on for the last three decades, coming to a head in the past number of years due to high profile cases such as Savita Halappanavar who died of complications in 2012 after she was denied an abortion, despite knowing her unborn baby would not survive outside of the womb.

The citizens assembly has voted that women should be able to legally access abortion in Ireland, with no restriction on her reasons. pic.twitter.com/5MOl6eTmhB

Dealing with other issues such as climate change and an aging Irish population, abortion and the Eighth Amendment, in particular, was the most controversial subject that the Citizen’s Assembly has had to address as pro-life and pro-choice groups throughout the country continue to age a PR battle for support.

Over the past five months, the Assembly has met on ten occasions for a selection of debates on the topic before a vote was finally cast last weekend. While the Repeal the Eighth movement in Ireland has been growing in momentum, the Assembly chose not to completely remove the amendment in a vote on Saturday, instead choosing to replace the law or to amend it.

On Sunday, however, 13 separate grounds for a legal termination in Ireland were approved by the Assembly with only 29 out of the 88 valid votes opting to keep abortion completely illegal.

There was overwhelming support among the assembly members for access to abortion in the event of rape or in the event of a fatal fetal abnormality, when doctors believe the baby will die before, during, or shortly after birth. A total of 89% supports abortion in these circumstances while 72% supported abortion for “socio-economic” reasons.

Anti-abortion campaigners have dismissed the results from the assembly, however, claiming the votes were cast under confused conditions, despite having being granted to opportunity to address the members and relay their opinions during the debates before the vote was cast.

"There is nothing liberal or progressive about the assembly recommending a referendum to strip unborn babies of their right to life in law and also ignoring the negative consequences of abortion for women,” said Cora Sherlock of the Pro Life campaign.

Following the vote, the Assembly chair Supreme Court judge Ms. Justice Mary Laffoy will now present a report to the government on the result by the end of June 2017. The government will then make a decision on whether to hold a referendum, a vote that must take place if any change is to be made to the Irish constitution.

Laffoy thanked the members of the assembly for having "engaged with some of the most complex pieces of legislation, immersed themselves in medical and ethical discourse, and listened with respect to the voices and opinions of others.

"I also wish to acknowledge those whose perspectives or opinions did not emerge in the final vote.

"This is an exercise in deliberative democracy and their vote remains important to me because of the very fact it captures that other perspective, that dissenting voice, the different interpretation and I wish to assure them that their votes and voices will be recorded and have a place in the report."