It wasn’t just in Ireland that people came to support abortion rights. 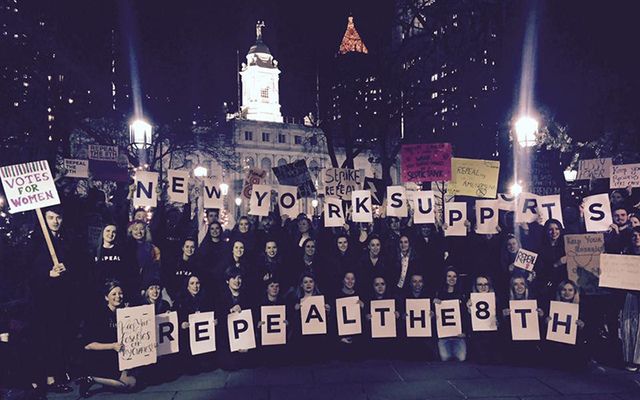 This year’s International Women’s Day saw thousands of pro-choice activists in Ireland skip work to march for abortion rights with police estimating the #Strike4Repeal demonstration in Dublin attracted between 10,000 and 12,000 protesters with similar, smaller, marches held across the Republic.

Abortion is forbidden in the Irish Constitution by the 8th amendment, which grants the unborn the equal right to life with their mother.

Critics say the Government should hold a referendum to repeal it, supporters counter that the amendment has saved thousands of lives.

Overseas Irish emigrants and local supporters also rallied in support of the strikers.

All the beautiful people at our #Strike4Repeal solidarity protest today in Glasgow <3 pic.twitter.com/lyUJBvou8O

Clare McGirr from Wicklow, who organized the New York event, told IrishCentral she did so because, “I think it’s incredibly important to show that we support the people back home and even though it’s an issue in a country that we’re not currently living in, it shows to the women back home that we support them and that we’re thinking of them.”

She was wearing a black “REPEAL” sweater which she said had been picked up on by a number of her American colleagues. “Yes,” she laughed, “they told me that I should be wearing red [for International Women’s Day]! We explained to them and they were all very much supportive of us.”

When asked whether she’d encountered much pro-life sentiment in the Irish immigrant community in New York she replied, “I haven’t personally no, but I’m sure that it exists.”

Limerickman David Walsh said if a referendum was held he’d travel back. “In a heartbeat, I’d fly home to vote and I think in the same manner of the marriage referendum a couple of years back you will see people if there is a referendum returning home because they will want to influence ... the kind of country they hope to return to.”

Anger at the Catholic Church for its pro-life position was much in evidence. Alexandra Black hit out at the organization for what she called its hypocrisy over the years in the wake of the Tuam revelations. “All of a sudden all the pro-life propaganda is like ‘don’t separate children from their mothers’, well, you did that for decades … and happily covered it up for years. It’s just the most hypocritical thing”

She too would fly home to vote. “Definitely,” she said, “without a doubt.”

IrishCentral contacted pro-life activists for comment on Wednesday’s protests but has yet to receive a reply.