Strike 4 Repeal group wants the Irish government to hold a referendum. Would you strike for something you really believed in? 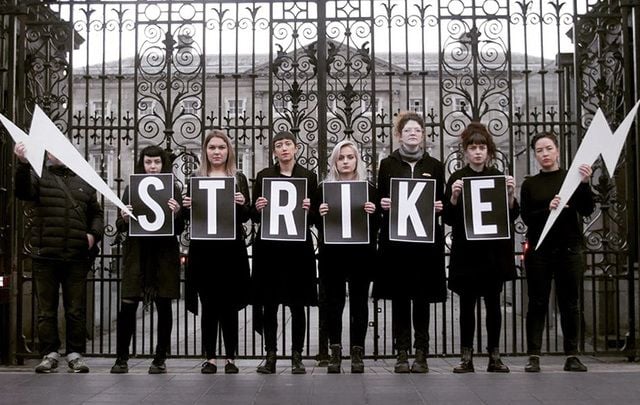 Strike 4 Repeal group wants the Irish government to hold a referendum. Would you strike for something you really believed in? #Strike4Repeal

Pro-choice activists in Ireland are planning a nationwide strike to protest the country’s strict abortion laws.

Inspired by women in Poland, who downed tools on a rainy Monday last October to successfully defeat a tightening of their abortion laws, the Strike 4 Repeal group hopes to persuade the Government to hold a referendum on Ireland’s own abortion laws.

An estimated 12 Irish women travel to Britain every day to access abortions and a referendum on deleting the 8th Amendment has long been a key goal of the Irish feminist movement. The issue is currently the subject of the Citizens’ Assembly, which will make a recommendation after sifting through the 13,000 submissions it has received from the public.

On its Facebook page Strike4Repeal states, “If it’s possible, book a day off work in advance… Wear all black or a black armband on the day to signify your support.

Stage an event at 12 noon or on your lunch break to remember the 12 women who have been forced to travel for abortion that day, and every day.

“Every person who has an abortion has to take at least a day, whether to travel or stay at home. Use this day to stand in solidarity with them, and demand change.”

The view that the pro-choice movement should wait until the Citizen Assembly makes its findings public is one that receives short shrift from the group. “No more delay tactics. No more political cowardice,” the group’s Eoin O’Faogain wrote in an article for HeadStuff. “The Government’s job is to facilitate the best interests of its people. In that vein; call a referendum on Repeal before March 8th or the strike will happen, and it will be significant. Do not underestimate just how empowered and energized people right across Ireland are about this issue.”

And the idea has gained significant traction on social media with currently over 1,100 people have clicked attending on the event page and a further 800 have expressed an “interest” in it.

If you think that #Strike4Repeal is too extreme but denying thousands of women their basic rights isn't, take a long hard look at yourself

Hope @irishcongress, @SIPTU & other unions get behind strike to #Strike4Repeal Would be a great way to show their support for Irish women!

Fascinating seeing "that's nothing to do with work" reaction to #Strike4Repeal - because pregnancy only happens at weekends is it?

Irish emigrants abroad also weighed in to support the idea. Dubliner Ciara Quinlan, who came to America late last year, told IrishCentral, “I think it shows how many women are affected by the 8th in a way that it is much harder to ignore than normal protest. It is sick that society is happy to reap the benefits of women's labor while still treating them as second class citizens.”

Gráinne Ní Mhuirgheasáin, who lives in Britain, told us, “Any inconvenience caused by the strike is nothing compared to the experiences of the women forced to travel overseas to access abortion. I also think it's a really honorable reason to strike; #strike4repeal is not about pay or working hours, it's about raising awareness of grave inequality.”

For some however, even if they support the strike in principle, they won’t be taking part. Law graduate Alexa Donnelly is currently studying for her bar exams on March 8. “I would strike for repeal if I had a job from which to strike," she said. Other students – a bastion of support for the pro-choice movement – expressed similar sentiments.

But support is far from universal: some warned of a backlash from undecided voters.

U must be joking if #repealthe8th movement goes ahead with a #Strike4Repeal it will alienate 100s of 1,000s who might've supported repeal https://t.co/NAB16dNq0y

One confused American wondered why so many foreign women could possibly have a problem with the 8th Amendment to the US Constitution that bans “cruel and unusual punishment”.

the best interaction under the #Strike4Repeal video pic.twitter.com/0h3cTAFh8L

But only one solitary tweeter wanted Ireland to have nothing to do with abortion altogether.

Away from the Twitter bastion of pro-choice sentiment Precious Life, an anti-abortion group, said it was imperative that the 8th Amendment was retained for the sake of the unborn. “Those who campaign for the repeal of the 8th amendment to the Irish Constitution want abortion on demand and that is exactly what will happen if the 8th amendment is repealed: abortion for any reason right up to the moment of birth,” Director Bernadette Smyth told IrishCentral. “The Irish Government must not get rid of the 8th amendment.”

If and when a referendum is called, the pro-choice campaign would start as the favorites; the most recent poll on the subject for the Irish Times/Ipsos MRBI showed 67% in favor of repealing the 8th, 21% against and 12% undecided.