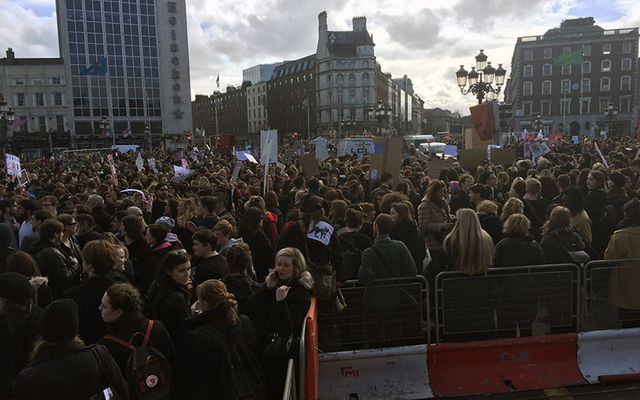 The Strike4Repeal marches took over Dublin's O'Connell Bridge. You wouldn't have thought so from the coverage on RTE. Kate Hickey

On Wednesday, Ireland made international news. CNN, the BBC, Reuters, they all noticed that between ten to twelve thousand Irishmen and women were sufficiently irate about something to take the day off work and march. And that was just in Dublin. But if you tuned into RTÉ News you were more likely to catch a debate about the rising cost of stamps - an issue close to the hearts of minds of perhaps dozens of Irish people.

The debate about abortion is well trodden. No less than five constitutional referendums have been put to the people on the issue in three decades, but if you were to ask many young people in Ireland, I don’t doubt many would rank it as their number one issue.

So you could have imagined my surprise when I tuned into RTÉ’s flagship news bulletin, the Six One, to find the item sitting comfortably down the running order in seventh place. On International Women’s Day nonetheless.

I mightn’t have expected the strike to lead the bulletin but it’s stretching reality to put so low down something that animates 10,000 people enough to take the day off work and fixes global media attention on Ireland.

On Wednesday, thousands went on strike, but instead of telling us about a strike that actually took place, RTÉ told us first about a cancelled strike - by firefighters since you ask. Important for sure, but not as important as something that actually happened.

However, placing ahead of it an item on the rise in the cost of stamps makes a mockery of a news program that should be the lens through which Ireland looks at itself.

*Thousands of people strike across Ireland*

Rté: time to discuss the rising price of stamps #Strike4Repeal

Al Jazeera gave more coverage to #StrikeForRepeal than RTÉ. It's almost as if it's more important than stamp prices. https://t.co/BMFwI15574

True, the rise in the cost of stamps is getting ridiculously dearer - 38 cents dearer for those of you who live under a rock by the way. And if I were still living in Dublin I would have sullenly shook my head in disbelief when I next went to post letters to my aunties who lived in England. Something I tried to do every couple of weeks by the way. But it’s not nation changing stuff.

“A bit of a joke” was the opinion of one customer or stamp collector in the GPO upon hearing the news but her verdict would have more appropriate had she been taking aim at the Six One’s editor.

After which we were generously updated for a full 30 seconds on what over 10,000 Irish people did with their day. For many of them they probably spent more on the cost of their bus or train ticket to Dublin than they do in a year on stamps.

After which it was back to the stamps as the CEO of An Post was in the studio, justifying his decision for a full four and a half minutes.

“We’ll probably be talking about this again in the future,” Dobson concluded to the nation. I have no doubt.

In America, the Women’s March in Washington lead the news around the world but in Ireland I guess a similar efforts are easily ignored.

A referendum on the 8th is coming, that I think is beyond question. Even if the current Government fudges the issues it’s still a question of when, not if. The 2010’s are a decade of social change in Ireland. History will write how within a few short years Ireland ripped up the old Catholic rule book about how gay couples should be treated and how trans people should be recognized.

And abortion is the next big topic; when the referendum comes many people, whether pro-choice or pro-life, will give up hours of their lives to talk tentatively to wavering voters and shove sodden leaflets through letter boxes on rainy evenings in the hope their side will prevail.

It’s nation defining stuff and the people involved deserve to have their stories told, that’s what a national broadcaster is for - to help the undecideds decide and chronicle how the rest of us are helping them do that.

RTÉ need to up their game, otherwise it will find itself increasingly marginal in a world where there are so many other ways to get your news.