TwoWomenTravel highlights the story of over 10 Irish women a day who travel overseas to obtain an abortion. 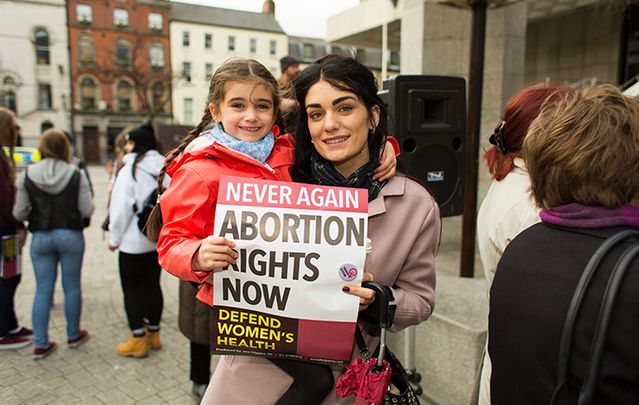 In just 28 tweets, two Irish women made the abortion ban in Ireland a topic of international conversation by producing a live stream of tweets throughout their journey to England for a termination.

Abortion has been illegal in Ireland since 1983. A woman who procures one within the country can face a jail term of more than a decade. This legal situation has forced many Irish woman to travel to England or to other European countries where laws around abortion are more lenient. As many as 150,000 women are believed to have made that journey since 1983.

Starting at 5am Saturday, August 20, the Twitter account @TwoWomenTravel documented the journey of one concerned Irish woman accompanying her friend to Manchester to have an abortion. She also recounted how the two women met other Irish women in the waiting room in Manchester.

Describing the mission as “Two women, one procedure, 48 hours away from home,” the account regularly addressed Irish Taoiseach (Prime Minister) Enda Kenny who supports the current abortion laws in Ireland. The Taoiseach has previously stated that his party, Fine Gael, currently the leaders in a minority government, will not oversee a referendum on abortion. A referendum is the only possibly means to repeal the 8th amendment to the Irish constitution (passed in 1983) that gives a fetus rights equal to the woman carrying it.

“Thank to @EndaKenny we’re about to hit the road,” they said, while another tweet asked him to send them the cab fare for their journey.

Good morning all .Thanks for all of th messages of solidarity and support.Thanks to@EndaKennyTD we're about to hit the road.#twowomentravel

In a tweet that showed most starkly the suffering of having to travel abroad to obtain an abortion over a weekend, Kenny was sent an image of a bloodied hotel bedsheet stating, “Not the first or the last bleeding women about to face a long trek home @EndaKennyTD #twowomentravel.”

Not the first or the last bleeding women about to face a long treck home @EndaKennyTD #twowomentravel pic.twitter.com/08q2CQE3Yw

The account quickly drew attention from all over the world, including English comedian and CBS late-night talk show host James Corden, who sent his support.

Today, @TwoWomenTravel but you're not on your own in this. So many people are with you. X

They were also supported by Irish Times feature editor Róisín Ingle, who last year wrote of her own experience traveling to England for a termination.

"What I want to say to the women is thank you. Thank you for shining light on the journey thousands upon thousands of Irish women, including myself, have been forced to make. Thank you for showing us the grim details from the gray clouds as you boarded the plane to the bloodstains on bed sheets that were not your own. Thank you for telling us of the other Irish women in the waiting room. Good women. Strong women. Not criminals," Ingle told CNN.

The Life Institute, an Irish pro-life organization, condemned media coverage of the issue, however, with a representative stating that the Twitter account was “disquieting” and the media failed to discuss the “reality of abortion.”

"It's always sad if a woman is made to feel that she has to have an abortion, or that she has no other option – and of course it's a heart-breaking tragedy when a baby has her life brutally ended by abortion. Though we've heard very little about that reality," Niamh Ui Bhriain of the Life Institute told Irish radio station Newstalk.

"There's something very disquieting about the Twitter campaign - it's more like a planned and coordinated campaign than simply somebody sharing their personal story.

"The reality is being ignored: there are plenty of discussions in the media as to the fact that Irish women travel for abortion, but there's no mention of the baby who has been killed.

"The fact of the matter is we're only ever hearing from one side of the story...how much of the reporting around this actually discussed the reality of abortion?

"How often do we hear from women who have undergone abortions and regret it?"

Taoiseach Kenny has yet to respond to the tweets, but Irish Minister for Health Simon Harris praised the women for sharing their journey with the rest of the world.

“Thanks to @TwoWomenTravel for telling story of reality which faces many. Citizens Assembly – a forum to discuss 8th & make recommendations,” read the minister’s message on Twitter.

Thanks to @TwoWomenTravel for telling story of reality which faces many. Citizens Assembly - a forum to discuss 8th & make recommendations

The women have declined requests for interviews from various news publications and have so far remained anonymous but have confirmed that they are both well over 18 years of age.

Their journey comes just a month after a landmark statement from the UN human rights committee which deemed that Ireland’s ban on abortion subjected a woman to cruel, inhuman and degrading treatment. In 2011, dual Irish and US citizen Amanda Mellet was denied an abortion in Ireland despite knowing that her baby suffered from congenital defects, meaning it would die in the womb or shortly after birth. Despite having no legal powers to force Ireland to change its laws, the UN ruling deemed Mellett's treatment to have violated her human rights.

Following the UN ruling, Pro-choice campaigners used Twitter to call for the Irish government to #repealthe8th, a hashtag that first came to prominence after the tragic death of Savita Halappanavar, 31, in 2012 after she was refused an abortion. The country’s strict abortion laws came under scrutiny when an inquest into Halappanavar’s death revealed her life could have been saved had a termination been carried out a day or two before her miscarriage.

After the inquest, a new law, passed in 2013, allowed for a termination if the mother’s life was deemed to be in danger, including from the risk of suicide. This move did not appease pro-life campaigners.

If you are angry or moved following #twowomentravel join the campaign to #repealthe8th & attend the March for Choice pic.twitter.com/WvEjnsHGFa