IrishCentral was LIVE at the March for Choice in Dublin

“Time to Act!” 82 percent of Irish want to loosen restrictive abortion laws that equate a woman’s life with a fetus. 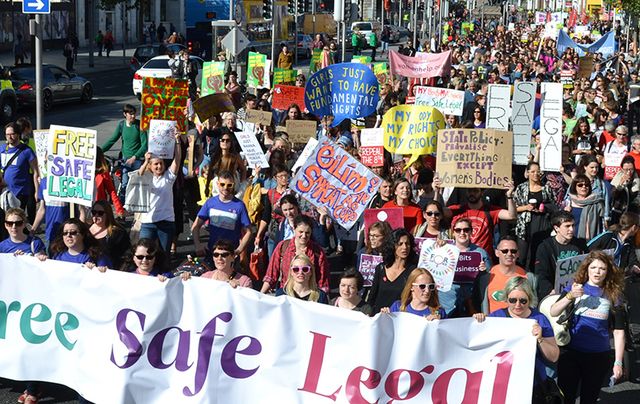 “Time to Act!” 82 percent of Irish want to loosen restrictive abortion laws that equate a woman’s life with that of a fetus

Massive crowds turned the “March for Choice” assembly in Dublin on Saturday afternoon, the weekend after a referendum on the Eighth Amendment of Ireland’s constitution was officially announced.

A constant stream of marchers took 50 minutes to pass by our camera on O'Connell Street:

Posted by IrishCentral.com on Saturday, September 30, 2017

This was Ireland’s sixth annual “March for Choice” and this year’s theme was “Time to Act!” Another 20 events are taking place across the globe in support of the march.

“We need full repeal of the 8th Amendment in the Republic of Ireland, and proper legislation in Northern Ireland. We need access to free, safe and legal abortion for all who need or want it. And we need it now.

“We need to act. Our government needs to act.”

Every day, on average, 12 Irish women travel to the United Kingdom for abortions, for various reasons.

In May 2017 an Irish Times/Ipsos MRBI poll asked if abortion should be legal in all circumstances, only 23 percent agreed it should, with 67 percent against and 10 percent not expressing any opinion. However, 82 percent of Irish people agreed that Ireland’s restrictive laws should be loosened.

What is the Eighth Amendment?

Earlier this week the government officially announced that a referendum on the 8th Amendment would take place in Ireland, in early summer 2018. The Eighth Amendment to the Irish Constitution equates the life of a fetus with that of the pregnant woman.

In November 2011, a Dublin woman Amanda Mellet learned, at 21 weeks pregnant that her fetus had severe congenital defects and was “incompatible with life”, it would die in the womb or shortly after birth.

Mellet bravely came forward to tell her story to Ireland’s media and hundreds of women followed.

Abortions in Ireland are allowed when the mother’s life is at risk, they are not permitted in cases of rape, incest or fatal fetal abnormality. This meant Mellet, like many others every month, had to choose “between continuing her nonviable pregnancy or traveling to another country while carrying a dying fetus, at personal expense and separated from the support of her family, and to return while not fully recovered.”

Mellet traveled to England for an abortion and returned 12 hours after the procedure because she did not have the money to stay longer. She had to leave the fetus’s remains behind but “the ashes were unexpectedly delivered to her three weeks later by courier.”

The United Nations ruled her case “inhumane” and the Irish government offered her €30,000 in compensation.

In 2012 Savita Halappanavar, a woman who lost her life due to complications in pregnancy led to the introduction of the Protection of Life During Pregnancy Act which allowed for a mother’s right to an abortion when her own life was at risk.

Yet despite this Act, just earlier this year a young Irish girl, reported to be as young as 14 years old, was admitted to a mental health unit for seeking an abortion even though it was decided that her life was at risk.

The Abortion Rights Campaign pointed out “This year we have learned of young children sectioned under the Mental Health Act for seeking abortions, of suicidal women denied access to the abortion they’re entitled to under the Protection of Life During Pregnancy Act because their doctor doesn’t think they’re “suicidal enough”

“Meanwhile in Northern Ireland women continue to be prosecuted for procuring their own abortions, even though the push to decriminalize abortion is growing in the rest of the UK.”

This is the second protest made by the pro-choice movement this year. In March thousands gathered on O'Connell Bridge, for Strike For Repeal, before marching on the government's buildings.

The Abortion Right Campaign added “The movement to repeal the 8th Amendment from the Irish constitution has gone from strength to strength…  the issue of abortion rights is not going away.”