A loud, proud, and sad show on Staten Island

"It is when Irish Catholics and other Ellis Island offspring align themselves with ugly carnival barkers like the Proud Boys that we come to a whole different and sad level of simple-mindedness." 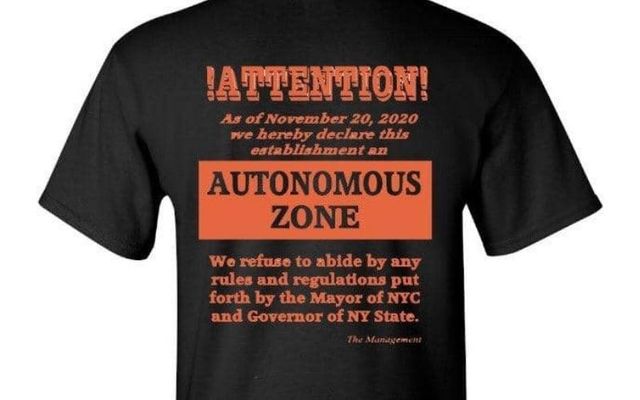 With shouts of “Proud Boys in the house” going up, the irony is that the communities on Staten Island would not exist without immigrants like our ancestors, the very people they oppose.

Talk about a pandemic hitting close to home.

Mac’s Public House on Lincoln Avenue in Staten Island, co-owned by Keith McAlarney and Danny Presti, is a short stroll from the home where I spent the first two-plus decades of my life.

You may have seen the crowds gathered outside of Mac’s this week, angry that this Irish bar -- like all other eateries and watering holes in New York City, and across much of the country -- is struggling under COVID restrictions.

So much so that the owners of Mac’s said “enough.” They deemed the joint an “autonomous zone,” free from rules imposed by a feckless mayor they despise.

For some, it’s easy to mock all this. “COVID-IOT” blared the Daily News front page after Presti, one of the bar’s managers, hit a law enforcement officer with his car this week.

“He just doesn’t care about people’s lives ... uniformed officer is clinging for life on the hood of his car," a de Blasio spokesman said.https://t.co/lQoqpRJSME pic.twitter.com/FGLTphFsXM

But for others, it’s too easy to thrust your fist into the air and rant about “oppression.”  It’s a big problem these days.

Everyone reacts in the easiest way. It’s a reflex. You don’t need to think.

What does require some thinking are the connections a few angry folks outside of Mac’s decided to make about struggling publicans and, you know, the fate of Western Civilization.

As the New York Post put it, among the ”hundreds of people” protesting outside of Mac’s were “members of the right-wing group Proud Boys.” It seems several chants of “Proud Boys in the house” went up outside Mac’s.

For those who don’t know, Proud Boys are not the latest pop sensation out of South Korea. They are a loud group of haters who fiercely resist what they see as the contamination of America and Europe by alien, foreign influences.

Outspoken Proud Boys leader Gavin McInnes once said, “I don’t want our culture diluted. We need to close the borders now and let everyone assimilate to a Western, white, English-speaking way of life.”

Next year marks the 100th anniversary of something called the Emergency Quota Act (EQA). Albert Johnson was a Washington state congressman who was the main architect of EQA. Johnson and his many supporters believed America was being contaminated by all sorts of alien, foreign influences.

There were the Irish who could only be loyal to the pope in Rome. And the Italians and Poles could not speak any English. And the Jews were not even Christian!

In other words, the grandparents of the folks chanting outside of Mac’s were ruining America.

And so Johnson and his allies like the Ku Klux Klan drew up a law in 1921 to start keeping people from these s***hole countries out.

In 1921, the population of Staten Island was not even 100,000. Yet Ellis Island’s immigrants did exactly what Albert Johnson and the KKK feared -- they had a lot of Catholic and Jewish children.

And their kids had a lot of kids, and they spread out to Staten Island, and the Bronx, and Yonkers, and Long Island.

And they did a lot of their drinking and laughing, loving and crying, at places like Mac’s.

When it comes to operating a pub these days, anyone who tells you there is an easy solution is a fool. They are a fool if they say all bars should simply be locked up.

And they are a fool if they say the adults should simply be left to make their own decisions.

But at least such things can be debated. It is when Irish Catholics and other Ellis Island offspring align themselves with ugly carnival barkers like the Proud Boys that we come to a whole different and sad level of simple-mindedness. Dumber than hitting a sheriff with your car.

Maybe you didn’t get along with grandma and grandpa. But what does it say about you if you believe they contaminated America?