IrishCentral Contributor Patricia Killeen on "The Irish Diaspora" by Turtle Bunbury, who will be in conversation at the Belfast International Arts Festival 2022. 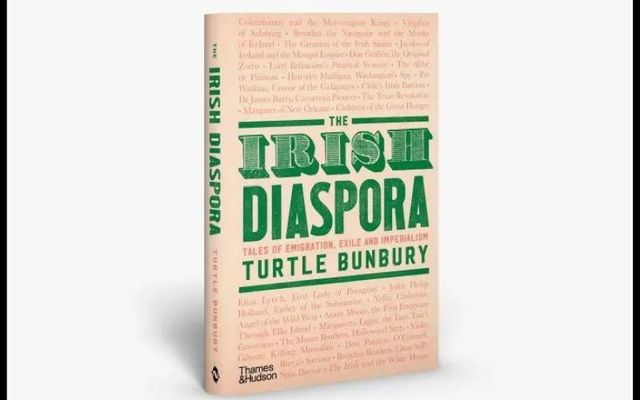 Interested in following Irish festivals from abroad, I have been keeping an eye on the extremely thought-provoking and eclectic program of the Belfast International Arts Festival 2022 (BIAF) which runs until Sunday 6 November 2022.

As a passionate member of the Irish Diaspora, one of the events that caught my eye is The Irish Diaspora - Sean Connolly and Turtle Bunbury in Conversation with Susan McKay on 5 November at 12:30 pm, IST.

These speakers are three of Ireland’s leading commentators on social history and they’ll discuss the legacy of generations who left the island of Ireland to make new lives in a new world.

Bunbury is a best-selling author and historian. His recent books include “The Irish Diaspora”, described by BBC History Magazine as "impeccably researched," just as Sebastian Barry applauds his book “Ireland’s Forgotten Past" as "a stirring atlas of Irishness." His other books include the “Vanishing Ireland” series and “The Glorious Madness." Bunbury is also a familiar face on Irish television and one of Ireland’s leading history podcasters, with series such as “Vanishing Ireland” and “The Global Irish."

For the lucky people attending the BIAF's Irish Diaspora event on 5 November in Belfast, it will be held in Cultúrlann McAdam Ó Fiaich which I’m very much looking forward to visiting on my next trip to Belfast. An Cultúrlann is an Irish language cultural center in the Gaeltacht Quarter on the Falls Road in Belfast where you can experience live traditional and contemporary music sessions, poetry readings, céilís, concerts, workshops, and the children’s arts program all under the one roof. The event is an in-person one and won’t be streamed.

Wanting to find out more about the event, I bought the book of the eponymous name “The Irish Diaspora” by Bunbury, published by Thames & Hudson Ltd. I found the book so interesting that I organized an event in homage to the BIAF where two excellent books, including this one, were discussed on 23 October.

Bunbury’s bible of the Irish Diaspora is a 304-page book, and makes for easy, enjoyable, informative reading and can be read cover to cover or zoning in on characters that particularly interest you.

It recounts that from the first voyages of Saint Brendan in the early sixth century, an estimated 10 million people have left the Irish shores for other countries, and today, more than 80 million people worldwide claim Irish descent and an estimated one million Irish-born people live abroad.

In the centuries after the fall of Rome, Irish missionaries carried the word of the Christian God throughout Europe, while soldiers and mariners from across the land ventured overseas in all directions.

The advent of the British Empire ignited a slow but extraordinary exodus from Ireland. These Wild Geese who opted to live outside of the Protestant state took their chances in the Spanish and French empires, as well as in the fledgling New World. These immigrants played an important role wherever they went: rising to high political and military positions in France and Spain, impacting the foundation of the United States, and fighting in the Civil War that followed it nearly eighty years later. Other Irish would come to the fore in business, science, engineering, and the arts, while some were destined for infamy as mobsters and gunslingers.

Bunbury explores the lives of Irish diasporic men and women, great and otherwise, whose pioneering journeys beyond the Irish shore have played a profound role in world history and have left their indelible mark far beyond Ireland.

Throughout “The Irish Diaspora,” Bunbury takes often overlooked events and characters and weaves them into an entertaining, and often surprising, history of the Irish abroad.

Some of the interesting titbits I learned as I turned the pages of the unputdownable book were that Galway-born bandmaster Patrick Sarsfield Gilmore (author of the song ‘When Johnny Comes Marching Home’) fought with 200,000 Irish-born soldiers in the American Civil War (1861–65).

I hadn’t realized the Irish Diaspora in Canada was so important, 4.6 million Canadians claim Irish descent – that’s over 15% of their population! I was delighted to find a complete chapter on Thomas D’arcy McGee, father of the Canadian confederation, as one of my friends is his descendant, and I’ve often admired an old oil painting of his ancestor while visiting his home.

I was amazed to find out that the first radio-spoken words were transmitted across the Atlantic from the seaside town of Ballybunion in Co Kerry!

I also learned about the Irish who settled in Montserrat known as ‘The Emerald Isle of the Caribbean’.

Chaim Herzog, the sixth president of Israel, was the son of the Chief Rabbi of Ireland and Che Guevara descended from Patrick Lynch, a Galway man! Another Lynch, Eliza Lynch was the First Lady of Paraguay.

I read how on Oliver Cromwell’s watch, between 6,000 and 10,000 Irish men and women were rounded up in the 1650s and sent to work as indentured servants on the Caribbean island of Barbados. Among them was the ancestor of Robyn Fenty, better known as the singer-songwriter Rihanna!

I also liked the inclusiveness of the book and found out that Ulster Scots were the ancestors of at least 16 US presidents.

As the years pass, and the prospect of a united Ireland happily approaches, in my opinion, books about Irish men and women and the Irish Diaspora will become more inclusive. However, Bunbury has a head start on that, and hats off!

As November looms, and I know from experience it can take two weeks or so to have a book delivered to Paris, I’ve already started to look for good ideas for Christmas gifts, and I think some of my family and Diaspora friends might be lucky enough to receive a copy of “The Irish Diaspora” for Christmas!