The London Jew gave his life for Ireland during Easter 1916

One of the more obscure, and tragic, stories of the 1916 Easter Rising concerns Abraham Weeks, a London Jew on the run who found himself in Dublin just as Easter Week was beginning. 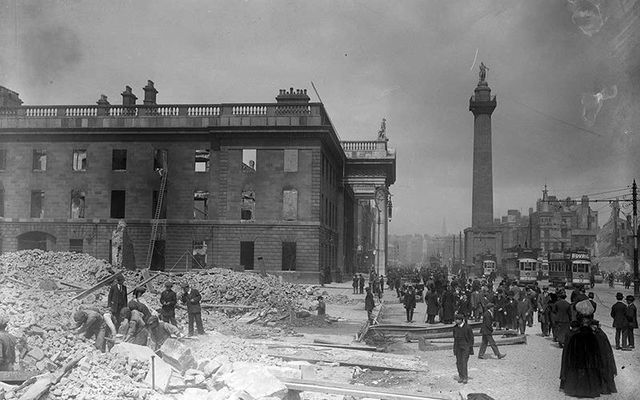 The GPO after the Easter Rising. NLI

One of the more obscure, and tragic, stories of Easter Week concerns Abraham Weeks (sometimes also known as “Wix”), a London Jew on-the-run who found himself in Dublin just as Easter Week was beginning.

Abraham Weeks was not the first Jew to fight for Irish freedom. One of Michael Collins’ closest associates was the heroic Michael Noyk, who defended many an IRA man, and was also instrumental in advising Collins on financial and real estate problems. Isaac Herzog, the Chief Rabbi of Ireland, was known as the “IRA Rabbi” during the War of Independence. His son Chaim, who grew up in Little Jerusalem on the South Circular Road, would go on to become the Sixth President of Israel. And most famously, Robert Briscoe, who was a quartermaster for Collins, securing then distributing weapons to the IRA, famously became the first Jewish Lord Mayor of Dublin in 1956.

It is said that Weeks was the first nationalist killed in 1916, but this seems to be a dubious claim. It is known that Captain Seán Connolly (no relation to James) of the Irish Citizen Army (ICA) was killed in the first hour of battle at the gates of Dublin Castle.

As for Weeks, little is known except that he was a London socialist who may have been on-the-run from British conscription which was introduced in January 1916. He apparently was a member of the International Workers of the World, affectionately known as the “Wobblies.” Why Dublin for Weeks? Well, conscription was not extended to Ireland and there is a more logical reason Weeks might have chosen Dublin—James Connolly, Commandant-General of the ICA and head of the powerful Irish Transport and General Workers’ Union (ITGWU) union, was also a proud Wobbly.

According to TheIrishWar.com, Weeks showed up at Liberty Hall on Easter Monday, presented himself to Connolly “asking to join the rebels stating that he had a conscientious objection to fighting for capitalistic and imperialistic governments, but that he also had a conscientious objection to being left out of a fight for liberty.” It is more likely, as a Wobbly and a follower of Connolly, he was known to the members of the ICA before the start of the rebellion.

Anyway, he was sworn into the ICA and marched with Connolly, Padraic Pearse and Tom Clarke to the General Post Office (GPO) for the takeover. It is said that he stayed in the GPO the whole week and with the building on fire on Friday he evacuated with the other rebels, heading under fire for Moore Street. It is said that he was killed during the escape. Thus, since it was the fifth day of the battle, it is highly unlikely that he was the first nationalist rebel to be killed in action.

The Jewish Telegraphic Agency reports that Weeks association with the ICA was cemented in 1924 when the Irish Worker newspaper, an organ of the ITGWU, mentioned Weeks in its Roll of Honour. Its declaration states: “A. Weeks, a Jewish comrade who joined on Easter Monday and died in action.”

So, more than a century after the Easter Rising, let’s not forget the mysterious British Jew, Abraham Weeks, an acolyte of James Connolly, gave his life for a country in which he was a stranger.

*Dermot McEvoy is the author of "The 13th Apostle: A Novel of Michael Collins and the Irish Uprising" and "Our Lady of Greenwich Village," both now available in paperback, Kindle and Audio from Skyhorse Publishing. He may be reached at dermotmcevoy50@gmail.com. Follow him on his website and Facebook page.