First casualty of the U.S. Civil War was an Irish soldier

The first casualty of the American Civil War was an Irishman, Private Daniel Hough from Tipperary. He was 36-years old. 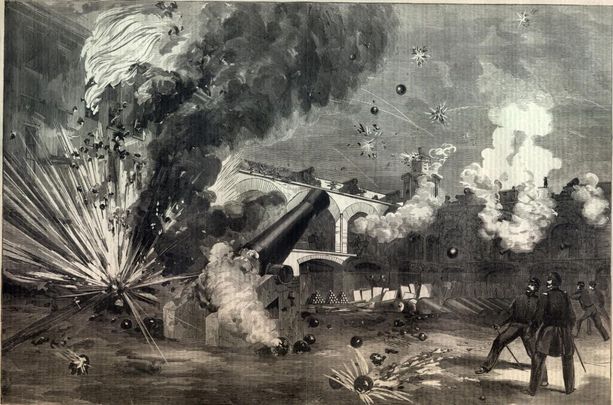 An illustration of the battle at Ford Sumter during the US Civil War. Christophe Cage / Public Domain

Daniel Hough, a Tipperary man, was the first man killed in the US Civil War, where he served with the Union Army at Fort Sumter.

Daniel Hough was born in 1825, in  County Tipperary. He emigrated to the United States and enlisted in the US Army in October 1849. He remained in the army and was at Fort Sumter in April 1861 at the beginning of the Civil War.

Hough was one of the Union Army defending Fort Sumter when the Confederates began attacking.

An official account of his career states that he was an Irish immigrant who had enlisted in Battery D of the 1st United States Artillery Regiment.

After serving out his enlistment, he re-enlisted on December 6, 1859, at Ft. Moultrie, South Carolina.

This time he was assigned to Battery E, 1st United States Artillery. He was a native of Tipperary, Ireland.

His military record states that he had gray hair, blue eyes, a fair complexion, and was 5 feet, 8 inches tall.

Private Hough was serving as an artillerist, posted at Ft. Sumter, out in Charleston Harbor, when the Civil War began on the morning of April 12, 1861. The garrison put up a spirited defense, and the bombardment lasted until April 14, when the fort's commander, Major Robert Anderson, decided to surrender the fort.

Confederate cannons had launched more than 3,000 rounds during the bombardment, said Rick Hatcher, a historian at Fort Sumter National Monument speaking to the Columbus Republic newspaper.

The cannonballs weighing up to 128 pounds destroyed the outer walls and the Confederates then lobbed cannonballs heated in furnaces into the interior of the fort.

Read more: Celebrating the Irish who fought in the Civil War

"They were coming down through the roofs of the barracks buildings and set those buildings on fire," Hatcher said.

The Union Army was offered an honorable surrender and to give a 100-gun salute to the fallen fort.

A cannon fired prematurely on the 47th  round, killing Union Pvt.  Hough, the immigrant from Tipperary, Ireland — the first death of the Civil War.

Unfortunately, the location of his grave is unknown. It is believed that his mother, two sisters, and brother (William) lived in or near New York City in 1861. His family petitioned the US government to have his body returned from South Carolina to New York for a proper burial.

Alas, the fate of Private Hough's body is still unclear. His remains were first interred in Ft. Sumter's parade ground shortly after his death. It is possible that he was re-interred in the Ft. Moultrie burial ground on Sullivan's Island nearby.

The location of this cemetery, however, is unknown today. His body may have been taken to the St. Lawrence Cemetery in Charleston. This cemetery has no records concerning Hough, however.

If Hough's remains stayed at Ft. Sumter, it is highly possible that they were destroyed by the heavy

Union bombardments of the fort during the 1863-1865 Siege of Charleston. Approximately seven million pounds of artillery projectiles were fired at the fort over the course of the siege, resulting in extensive damage to the fort.

Major General Abner Doubleday witnessed what occurred that April 14, 1861 when Hough died. ."It happened that some flakes of fire had entered the muzzle of one of the guns after it was sponged. Of course, when the gunner attempted to ram the cartridge down it exploded prematurely, killing Private Daniel Hough instantly, and setting fire to a pile of cartridges underneath, which also exploded, seriously wounding five men. Fifty guns were fired in the salute."

Read more: Lincoln and the Irish, the untold story revealed