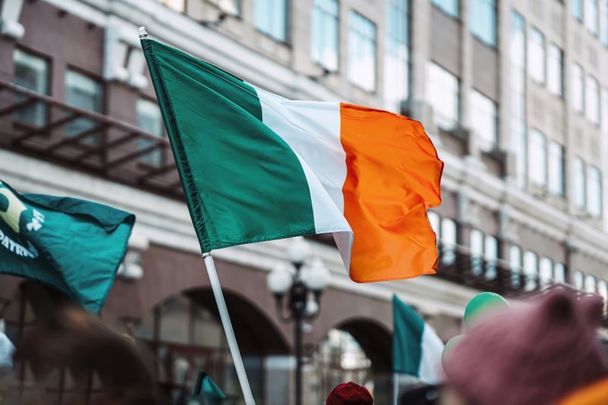 St. Patrick’s Day, known in the United States as the quintessential Irish holiday, is upon us again.

If you’re an Irish American looking to celebrate your heritage this Saint Paddy’s Day, why not go a bit further this year? Take the step from passive Irish descent to active kinship with the global Irish community.

As an Irish American, you’re one of around 80 million people all over the world whose ancestors immigrated from Ireland. That makes you part of the Irish Diaspora, known as the Diaspóra na nGael in Irish. That’s right, Ireland has its own indigenous language, still understood by almost 2 million of Ireland’s 6.5 million people. Nearly 73,803 of them speak it daily.

So why not take a class in the Irish language? Irish cultural institutions in most major American cities offer beginner-level instruction in Irish, many of which are available online. If you can’t find a class near you, there are English-Irish dictionaries on the internet, like focloir.ie and teanglann.ie, and the free Duolingo app offers Irish language lessons. Learning a new language can be a challenging endeavor but, as the Irish say, is fearr Gaeilge bhriste ná Béarla cliste.

By trying to learn the language, you won’t just be connecting with your own heritage, you’ll be helping to keep Irish alive – and you’ll have a perfect opportunity to meet other members of the global Irish community.

Many of us in that community have heard our family talk about leaving Ireland because of “the Famine.” The Great Famine killed about a million people in mid-19th century Ireland and spurred even more to flee the country.

The Famine was caused indirectly by the British Empire, which controlled Ireland at the time. British policy toward the colonized Irish encouraged them to survive off potatoes – a crop that doesn’t take up much land, freeing the bulk of it to be used for agricultural produce that British landowners could profit from. This enforced dependency on potatoes left the Irish vulnerable to starvation when the potato blight fungus decimated their food supply.

This is often what it means to be part of a diaspora – to know that your ancestors were forced to flee their homes because of the people in power. This is the history that we share with the people of Ireland today. Learning that history helps us understand how it guided our ancestors’ actions. More importantly, it should inspire us to act in solidarity with other colonized and oppressed people all over the world.

There are more chronicles of Ireland’s past than would fit on this page. Ask your local librarian or bookseller to point you in the right direction and you’ll soon find yourself immersed in stories of the ancient Gaelic clans, the Viking invasions, and the Irish War of Independence. And maybe you’ll even see where your own roots are woven into that history.

But don't forget: Irishness is more than a history, it’s a living culture. Watching Irish television shows like "Derry Girls' or "Normal People," or movies like "Once" or "Boys from County Hell," can give you a glimpse of modern Ireland.

You can also try some of Ireland’s common cuisine, whether having a cup of Barry’s Tea or making your own boxty.

Of course, none of this is a substitute for actually getting to know people from Ireland. But it might give you something to talk about when you do!

*This article was submitted to IrishCentral by Marlow Murphy, an Irish American writer in Brooklyn who last year was published in The Writing Irish of New York and was previously a panelist for NYC's Craic Fest. If you'd like to submit to IrishCentral, sign up for our contributors network IrishCentral Storytellers here.