The Irish diaspora in the US begins to emerge from the pandemic with lessons learned, a renewed optimism, and funding from the Emigrant Support Programme. 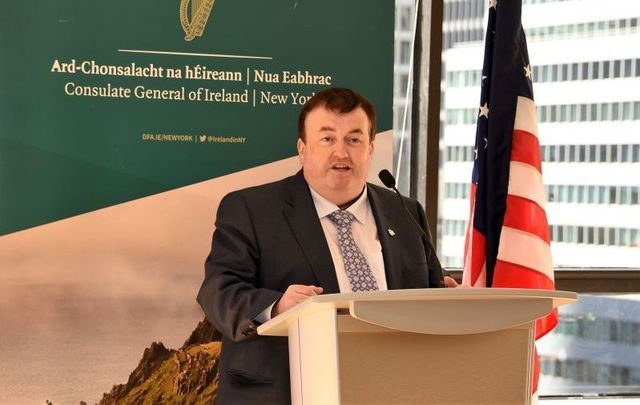 October 20, 2021: Ireland's Minister for the Diaspora TD Colm Brophy speaking with representatives from the groups receiving grants from the Emigrant Support Programme at the Consulate General of Ireland in New York City. Nuala Purcell

Ireland’s Minister for the Diaspora TD Colm Brophy was at the Consulate General of Ireland in New York City on October 20 to meet with representatives of the groups who are recipients of grants from the Emigrant Support Programme (ESP).

The funding was announced earlier in the day on Wednesday - more than $1.1 million will be dispersed to some two dozen groups in the New York area that span in interest from the arts, to mental health, to, of course, immigration and pastoral services.

“We’re in no means post-pandemic,” Minister Brophy told IrishCentral on Wednesday, “but I think collectively we’re beginning to see, particularly for the Diaspora groups, that opportunity to rebuild and engage. And really at the core of what I was looking to do with the funding this year is help and facilitate how you move forward out of COVID.”

Brophy said that the Irish government put emergency funding into place with a great deal of flexibility for Irish Diaspora groups over the past 18 months.

“We said, ‘Listen, we’re not interested in a 16-page memo about how something will work. You know what you’re doing, make it happen.’

“And groups did, and not only did they do it, but they did it with such huge effort - people probably gave more of their personal space, time, everything than they’d ever given.”

Emily Norton Ashinhurst, the Executive Director at the Irish Diaspora Center (IDC) on the outskirts of Philadelphia, told IrishCentral that the ESP grant “is a huge help to us; we wouldn’t be able to do what we do without the funding.”

While the IDC’s typical funding was difficult throughout the pandemic, Ashinhurst said that their “programs really couldn’t take a hit because so many people rely on us.”

She said the strain on mental health throughout the pandemic was evident and the IDC did all it could to stay in touch with its widespread community.

“There are a lot of mental issues that just completely impact the immigrant community, especially the Irish community.”

Ashinhurst said the reopening of travel in November will “help with mental health services tremendously.”

She added: “I think part of the struggle over the past 21 months has been the fact that, especially those that are in the country undocumented, they have not been able to see their families. So, the opening of borders here is going to be a tremendous help.”

Supporting a large community, oftentimes struggling with mental health, through a difficult year didn’t deter Ashinhurst and her team at the IDC from looking ahead. She was excited to discuss the IDC’s pilot program of scholarships at Irish universities for Irish passport holders in the Philadelphia area.

“I think it opens up a world of possibilities for our students," she said, adding “The value of living somewhere else, the connection that it builds between the US and Ireland - if you study for four years, your connection to Ireland is enormous. There are only upsides to it.” (You can learn more about the IDC’s pilot program for Irish university scholarships here.)

The scholarship program is just one example of how, elsewhere in our discussion, Minister Brophy expressed an interest in helping facilitate a more “back and forth” movement for Irish Americans wishing to visit, study, or work in Ireland.

“It’s all about taking what is there from pre-COVID time, ensuring that those organizations and structures through immediate funding can come out of it, but in the longer sense, taking on this strategy and saying, right, we want to deepen the contact between Ireland and its Diaspora, particularly by allowing return to plug into Ireland - people don’t have to come back for good, they’ll come back, they’ll experience it, they’ll have a time out in Ireland -- and they’ll come back as a recharged ambassador.”

Minister Brophy also seemed optimistic about expanding the definition of the Irish Diaspora to include those who might be more generationally removed, and people who may only be fractionally connected to Ireland.

This is partially evident in the funding grant presented to Our Steps, the inaugural project of which was to start the "first-ever archive on traditional dance."

"There’s a lot of work to do," Jean Butler, the Executive Director at Our Steps, told IrishCentral on Wednesday. Butler famously starred alongside Michael Flatley in the original Riverdance.

Our Steps is collecting traditional dances from “wherever Irish dance is in the world,” Butler says. The project also commissions four essays annually and is developing an oral history collection.

“So, I just feel really strongly, that having the support will bring other people to the project.”

Minister Brophy is in New York not long after traveling to London to present similar funding to nearly 100 groups across Britain. In the coming weeks, he’ll be traveling to Texas and Florida to present even more funding in the US.

He says: “We had a wonderful, wonderful coming together of intergenerational groups” throughout the pandemic. “It’s really important to harness that, to recognize that people are going to get back to a more normal life and then make sure we help organizations to keep that spirit and the best of that going.”