Sign of hope one year on from the Capitol riots?

It’s now been a year since the violence at the Capitol and we’re still struggling to make sense of what it all means. 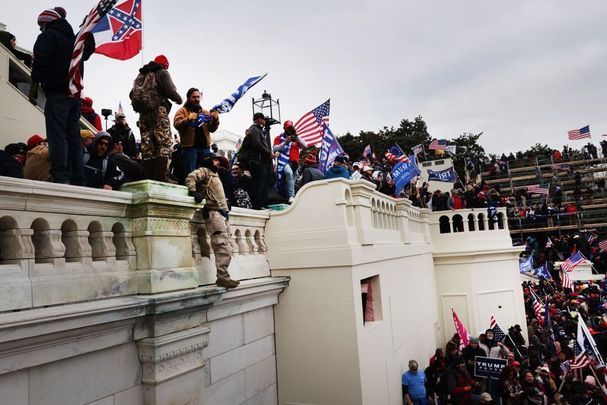 For a moment there I was proud. Proud that an Irish Catholic judge stood up to one of those infamous “Proud Boys” who seem to do an awful lot of whining for folks who claim to be filled with pride.

“A federal judge is allowing a major January 6 conspiracy case against four Proud Boys leaders to move forward, rejecting their bid to throw out the charges,” CNN reported, adding that the judge in question, Long Island-born Timothy James Kelly, “sided with the Justice Department on several key legal questions, giving momentum to prosecutors as they prepare for the first wave of U.S. Capitol riot-related trials beginning in February.”

And since one of the four Proud Boys, in this case, was named Charles Donohoe, I had visions of a fiery old-school Irish liberal in the mold of, say, Mike Quill or the Berrigan brothers. Scolding a fellow Hibernian for betraying his humble immigrant roots by joining a movement brimming with the kind of rage that Grandma and Grandpa Donohoe might have faced from the anti-Irish Klan in the 1920s.

It took about two seconds for me to find out that Judge Kelly, in this case, was actually appointed to the federal bench by the 45th president of the United States, the guy who fired up all those Proud Boys and -- shall we say -- did not discourage them from storming the Capitol building and disrupting the functions of democracy, because many of these folks seem to believe that certain people are not worthy of the fruits of democracy.

That’s the point, isn’t it? It’s now been a year since the violence at the Capitol and we’re still struggling to make sense of what it all means.

And this is an even more sensitive question for Irish American Catholics.

Many of us have spent the last five years doing an awful lot of cringing, given the heavily Hibernian makeup of MAGAmerica -- Sean Hannity, Mick Mulvaney, Michael Flynn, John Kelly, and on and on.

But as the new year begins, and all those Capitol rioters go on trial, two things to keep in mind.

In the minds of many brainy progressives, the red-hatted Fox News brigade is a mindless mob pursuing the single goal of Making America Trump’s Again.

But let’s give Judge Kelly some credit.

He’s actually had several cases before him, several opportunities to advance a MAGA agenda.

He has chosen not to.

Back in 2018, he (as Slate put it) “restored CNN reporter Jim Acosta’s White House press pass…finding that the government had likely revoked his credentials without due process. The decision was straightforward and legally sound but it was received with some surprise because the president who appointed Kelly to the bench was also a named defendant in the case: Donald J. Trump.”

More broadly, amidst all the understandable commentary about the unbearable whiteness of the MAGA movement, the anti-Trump crowd might be missing an important lesson in all those Irish American Trump supporters.

There remains a belief that sooner or later all these kooky white folks, whether their descendants came through Ellis Island or Plymouth Rock, are on their way to extinction.

Then we will all live happily and progressively ever after.

This ignores some of MAGAmerica’s most dedicated followers and enablers.

People like Rasha Abual-Ragheb and Eduardo Nicholas Albear Gonzalez, both charged in the wake of January 6. And prominent Proud Boy Enrique Tarrio.

In other words, the children of yesterday’s immigrants are not the only ones susceptible to the charms of angry populists, whatever those charms might be.

Any effort to combat these forces needs to take that into account.

It’s nearly as easy to mock an Irish American blowhard like Sean Hannity, as it is for such a blowhard to exploit all the rage and confusion out there in America.

In 2022, let’s maybe at least try and avoid taking the easy way out.