Christopher M. Kelly told Facebook users that he planned to travel to Washington DC with an ex-cop and Proud Boy members. 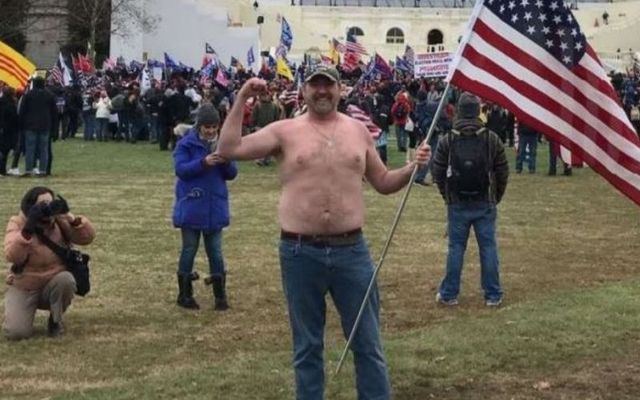 Chris Kelly was photographed shirtless outside the Capitol Building on January 6. US District Court for the District of Columbia

An Irish-American man from New York with an ex-cop brother has been charged for his part in the Capitol riots at the beginning of January.

Christopher M. Kelly of New City, New York, was charged in the US District Court in Washington DC on Wednesday with obstruction of an official proceeding, aiding and abetting, unlawful entry to a restricted building, and violent entry/disorderly conduct for his part in the January 6 riots.

Kelly, who was photographed shirtless outside the Capitol Building, told friends on Facebook that he'd be there with "ex-NYPD" and Proud Boy members, according to court documents.

On January 4, Kelly said that he would be traveling 250 miles to Washington to protest the results of last year's presidential election, prompting one of his friends to warn him that "Antifa will be out in force".

"No worries," Kelly responding, according to a criminal complaint. "I’ll be with ex NYPD and some proud boys. This will be the most historic event of my life."

An FBI agent noted in the criminal complaint that Kelly has an ex-NYPD brother, indicating that Kelly planned to attend the protests with him.

Meanwhile, Kelly subsequently wrote in a Facebook Messenger group chat on January 9 that his brother took the shirtless photo of him outside the Capitol Building.

Kelly also sent the picture to another Facebook user on January 6 alongside the caption "we're inside" before sending other pictures of rioters inside the Capitol Building, according to the complaint.

In a post dated December 28, 2020, Kelly wrote: "When good men do
nothing, evil triumphs. Evil, sin and sinful men must be opposed. God commands those who are good, not just to avoid evil but actively oppose it.’ Where will you be on 1/6," the complaint said.

Kelly additionally told Facebook users that he planned to travel to Washington for two nights and that he was "taking this back by force now".

A confidential source has been providing information to the FBI since 2019, including screenshots of Kelly's Facebook page, according to CBS.