Reflecting on the feisty Irish women of France, past, present and future

IrishCentral Contributor Patricia Killeen on how Mná na hÉireann (Women of Ireland) are helping to preserve Irish culture and history while living in France. 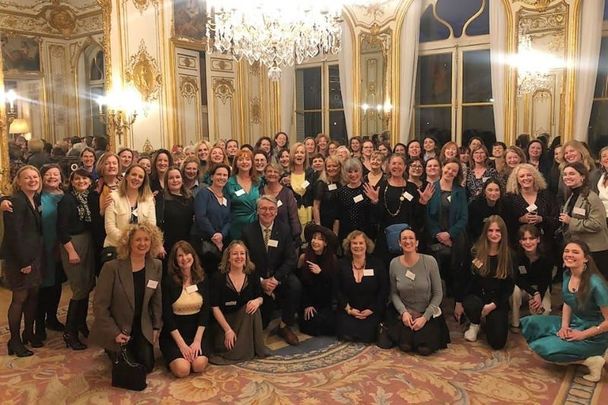 Mná na hÉireann, France pictured at the Irish embassy in Paris with H.E. Niall Burgess, Ambassador of Ireland to France

The Mná were warmly welcomed to the embassy by embassy staff and volunteer Mná na hÉireann meeters and greeters Margaret O’Sullivan and Patricia Caviston. For many of the Mná, especially for the younger generation, it was their first time visiting the embassy.

Mná na hÉireann was created in France in 2016 by Shauna Kelly-Lefevre and flourished as a WhatsApp group during the Covid lockdown. The raison d’être of the Mnáwesome group is to “stay connected and together under all skies, whether blue, grey, or dark. Support thanks to togetherness is the main goal of the Group”.

There are currently 165 Mná in the group residing throughout France. With dynamic momentum, the group continues to increase every week. (The number of Irish people currently living in France is estimated at around 25,000.)

After banter and enjoying delicious canapés (including Irish cocktail sausages, the uncontested stars of the buffet), Mná gathered to listen to H.E. Niall Burgess speak.

H.E. Burgess, a former Consul General of Ireland in New York (2007-2010) became Ambassador of Ireland to France in December 2021. He said he was impressed by the Mná group, portraying the strength of our Irish community under the shadow of the global pandemic and providing such shelter and support. He reminded us of the Irish expression, “Ar scáth a chéile a mhaireann na daoine”, meaning we live protected under each other’s shadow.

As we emerge from the pandemic, he advised we “be attentive, be ambitious and be at home”. In Paris, the Irish are lucky to have two beautiful “homes”, the Embassy on the right bank and the Irish Cultural Centre, under the direction of Nora Hickey M'Sichili, on the left bank.

The Mná na hÉireann in France has been the first such group to emerge in any community outside Ireland since the pandemic. The eclectic diversity and age range of the women, hailing from all parts of Ireland, with experience in so many domains, makes the “skilled to the hills” group extremely interesting.

I reflected on other Irish women who had also lived in France: Maud Gonne; Countess Markievicz; Eileen Grey, architect; Hannah Lynch, writer; Katherine McCarthy and Maureen Patricia O’Sullivan who served the cause of the liberation of France during WWII. More than half of the 50 Irish people honored for working with the French resistance were women.

I also thought about Margaret Kelly, “Miss Bluebell” founder of the mythical “Lido Bluebell Girls”. Her story highlights the link between Irish women in France and their embassy. On New Year’s Eve 1940, the pregnant Kelly was rescued from a prisoner of war camp, in Besançon, by Count Gerald Edward O'Kelly, a former Irish diplomat. He secured her release by procuring for her (and for many others) a neutral Irish passport. Kelly was holding a British "enemy of the Third Reich” passport when arrested.

After H.E. Burgess’s opening remarks, Shauna Kelly-Lefevre explained the evening’s program, designed to ensure all attendees could contribute to this unique opportunity. Four break-out rooms were used to facilitate discussion, capitalize on and collect members’ feedback and brainstorm on how to harness the energy and talent of the group and decide the Mnà’s next steps in France. Róisín Dockery, Carmel Keane, Pamela Boutin-Bird, and Triona Campbell led the break-out rooms and summarized when we all reunited

There were interesting recommendations from each group, with a definite, clear common denominator - to hold onto the craic, banter, mutual support and the WhatsApp group as we grew. A members’ directory was suggested, as was a Mná website, or other platform, to enable easier access to contacts, partner services, promote events, share job offers, etc.

The warmth of the group, and its exponential growth during the pandemic proves that clouds often do have a silver lining. In addition, Brexit has and continues to create opportunities and interesting new career paths for the Irish diaspora in France. The soft power and extensive information available from the Mná already on the ground is invaluable for new Irish women arriving in France.

Before I left the embassy, I realized that H.E. Burgess, who played an active role in the Irish peace process and participated in the Good Friday Agreement, was also a descendant of the 1916 Rising hero Cathal Brugha (Burgess in Gaelic).

Our 1916 revolutionary leaders offered a first and revolutionary mention of Irish gender equality when they addressed the Proclamation of Independence to “The People of Ireland - IRISHMEN and IRISHWOMEN”, promising "religious and civil liberty, equal rights, and equal opportunities to all its citizens”.

1916 leader Countess Markievicz, who studied art at the Académie Julian, Paris, was one of the first women in the world to hold an Irish cabinet position, as Minister for Labour (1919–22). Geraldine Byrne Nason, Ambassador of Ireland to France (2014-17), left Paris for New York, to become Ireland’s Permanent Representative to the United Nations.

Our embassy evening ended with a spontaneous, ethereal rendition of “The Parting Glass” by Louise Taylor-Scott, as we celebrated how past, present, and future Mná na hÉireann’s green imprints left, and continue to leave, their scintillating impression on the Hexagon!