IrishCentral contributor Patricia Killeen shares all that's happening amongst the Irish community in Paris, France this St. Patrick's Day, including a special appearance from Ryan Tubridy. 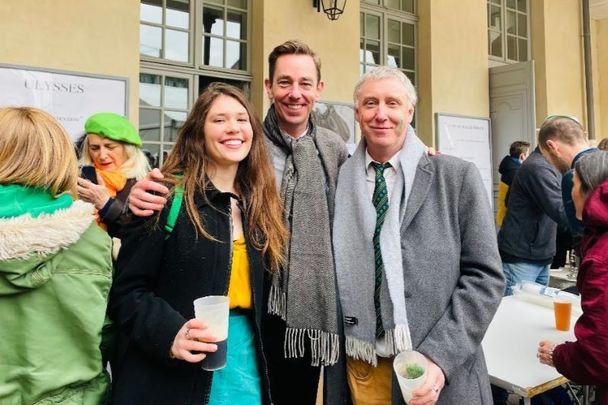 Ryan Tubridy, a gentleman and a scholar and presenter of RTE's The Late Late Show, kept his promise to the Irish in France and made it to Paris for their Saint Patrick’s festivities!

In March 2021, the Irish in France Association (IIF) welcomed Ryan Tubridy as a co-host for their virtual St. Patrick's Day festivities. Co-hosting with Páraic Maguire and Paul Lynch, President of the IIF, Tubridy in his inimitable “Late Late Show” style chatted with the Irish in France in between acts by a star-studded cast Zooming in from Ireland.

One youngster asked him if he lived in a library. Tubridy, Zooming from his house in Ireland, was surrounded by bookshelves and he confided to the youngster that he just loved reading.

Tubridy was really taken with the local French-based stars on Zoom and when he heard Maureen O'Donoghue’s rendition of “The Rocky Road to Dublin”, he promised, there and then, that he’d be back in Paris for the 2022 festivities.

But a lot of promises were made during Covid. I swore when the gyms opened I’d be there every day, but somehow…

Now when I read on the IIF Facebook page “Well he did say 'next year we'll be together' so... this year 2022 we will be joined by Mr. Ryan Tubridy himself,” I thought, a gentleman who keeps his promises as well as being great craic!

📢☘️🌟 We have an exciting new announcement to make for our St. Patrick's Ceilidh Celebration with the Centre Culturel Irlandais this year on the 13th March 2022 in Paris 📢☘️🌟 🇮🇪Well he did say "next year we'll be together" so... this year 2022 we will be joined by Mr Ryan Tubridy himself!🇫🇷 💚Join us at the Centre Culturel Irlandais in Paris at 13:00, there is no registration required and is open to all so get there on time 🕐 We are also honored to be joined by HE Niall Burgess, Ambassador of Ireland to France. 13h00 Doors open 🎉 13h30 Welcome speeches 📢 13h45 Ceilidh with the Paname Connection Ceilidh Band 🪕 15h45 Irish dancing expo. with Sarah Clark School of Irish Dance 🕺 16h Headlining act "NoCrows" 🎵 🍻🥳We'll be well watered and fed by both McBrides Irish Pub and the Creperie St Honore.🥳🍻 🎵🎼Make sure you bring your dancing shoes!! The Ceilidh is going to be mighty!!! 🕺💃 Centre Culturel Irlandais Irish in France Facebook Group The Ryan Tubridy Show #stpatricks To Be Irish

The marquee was up and ready for the big Ceilidh Mor organised by the IIF and the Centre Culturel Irlandais (CCI) on Sunday 13 March at 1 pm. Irish people living in France spit-shined their dancing shoes, shook out gúnaí deas, and donned Paddy’s Day hats, wigs, green beards and were so happy to meet up again, this time off Zoom. The idea of a Ceilidh Mor together, after two years of on and off Covid restrictions, was mighty!

We were welcomed to the CCI by another scholar, a Joycean one, HE Niall Burgess, Ambassador of Ireland to France, and after the speeches, we danced to the beat of the Paname Connection Ceilidh Band guided by the fantastic caller. Then after we struted our stuff on the dance floor, we watched the Irish dancers from the Sarah Clark School of Irish Dance, Paris perform. Then the mythical, magical group "No Crows" a folk orchestra from Sligo, took to the stage for a glorious melee with Irish Trad, Gyps, oriental and Mediterranean flavours.

The crowds were well watered and fed by both McBrides Irish Pub and the Creperie St Honore throughout the day’s festivities. Ryan Tubridy mingled with everyone in the courtyard and we all got souvenir photos with him and videos of him saying hello to Mammy’s back home.

But the festivities are far from over. At the CCI this year, it’s a year of anniversaries and celebrations and the Saint Patrick’s Festival continues with daily events and exhibitions, ending with their big finale family party event on Sunday 20 March.

2022 is a very special year for the CCI and it shows in their programming. They remember how on February 2, 1922, James Joyce finally succeeded in publishing his masterpiece "Ulysses," but in Paris, not in Dublin, where the "obscene" and "anti-Irish" content of the work was considered too risky. 1922 was also the year when Ireland finally gained its independence by becoming a free state. And 2022 is also the 20th anniversary of the CCI. So in a year of triple celebrations, exhibitions at the CCI reflect those anniversaries:

And “Tubs” wasn’t the only star to walk the cobbled stones of the CCI courtyard this weekend. On 12 March, the CCI presented an inspiring evening with four speakers commenting on centennial Ireland in relation to social justice, human rights, history, philosophy, and religion as part of their series 2022 Congress for Ireland. Queen of Ireland Panti Bliss (human rights and LGBTQIA+ activist whose 2014 speech at the Abbey Theatre in Dublin was shared worldwide and played a significant role in the outcome of Ireland's referendum on same-sex marriage the following year), Irish philosopher Richard Kearney, Human rights defender Sean Binder and Catriona Crowe, senior archivist each gave a short address, in an evening that everyone present agreed marked our own 21st century.

And when it comes to the big day itself, 17 March, we are again spoilt for choice. There’s my Irish class in the CCI with fantastic múinteoir William Howard. However, I may have to go on the mitch as in the chapel of the CCI, Maureen O'Donoghue and Jordan Kay, who together form the musical duo Saelkie Folk, will open for the fabulous Inni-K.

The mighty Paddy Sherlock will play lunchtime and evening gigs in Corcoran's Irish Pub La Défense. And the magical Liv Monaghan will perform at the Babilo Jazz Club.

Last week, a friend of mine who just came back from Ireland said that with all the Irish events going on in Paris, "I think we’re better off here than at home." It seems the Irish in France have the possibility to blend the “wearing of the green” with “la vie en rose” and even if I had all the money in the world, Paris is the place I'd definitely choose to spend St. Patrick's Day 2022!