The Irish in France Association welcomed Ryan Tubridy as their co-host for their virtual St. Patrick's Day festivities this year. 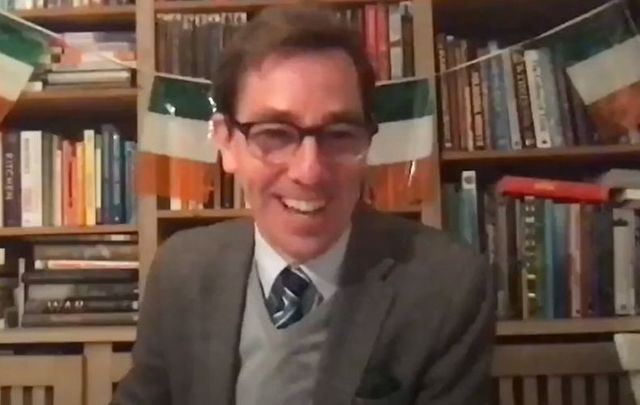 Chairperson Paul Lynch and the board members of the Irish in France association (IIF)[1], pulled out all the stops to make sure the Irish community in France had a St. Patrick's Day to remember, despite the current global health crisis.

In 2018, the IIF organized the first-ever St. Patrick's Day parade in the City of Light, stepping out, under the snow, with 500 pioneer parade-goers braving the elements. For the 2019 SPD parade, over two thousand stepped out, from the Centre Culturel Irlandais.

In 2020, due to health concerns, the IIF had to cancel the third-ever SPD Paris parade.

H.E. Ambassador of Ireland to France Patricia O’Brien opened the 2021 online IIF celebrations. A star-studded Irish cast, from the world of music, stage, and film, Zoomed in from across the waters, including Michele Moran, Lisa Lambe, Fiachna Ó Braonáin, Mundy, Mary Murray (aka Mrs Gibney), and Cairde.

Tubridy, who co-hosted the event with Páraic Maguire and Paul Lynch in his inimitable “Late Late Toy Show” style, chatted with the younger Irish in France members. One youngster asked if he lived in a library. Ryan, at home, was surrounded by bookshelves and he confided that he really loved reading.

When an adult asked what advice he would give to young people, Tubridy said to read lots of books and to always be polite. He said the same advice actually also applied to adults, those who read enough would never be caught short of conversation at any dinner party, and politeness speaks for itself.

He said seeing everyone, especially the youngsters dancing around their sitting rooms was like witnessing “a gorgeous cultural domino that falls through the generations”. The wonderful performances of the Irish children living in France throughout the event really showed that the “Irish story travels across ocean and seas”.

Tubridy also acted as raffle master, drawing the winning tickets for lots of goodies generously donated by Bord Bia France and other “Irish in France” Advantage Partners and Friends.

Tubridy (fondly also known as “Tubs”) was very taken with the local Irish French-based stars. Maria D'Arcy's spectacular dance video to 'The Mystery of Love' surprised everyone, particularly Ryan Tubridy, who enthusiastically congratulated her on her sparking spontaneity when dancing around the beautiful sights of Paris. An Irish storyteller, cabaret dancer, and fiction writer, Maria has been based in Paris since 1997. "Tubs” spoke to her directly, commenting how amazing it was to dance with such insouciance, as if nobody was looking on, and that he could see she loved life, capturing the very essence of the fun Irish spirit.

Maureen O’Donoghue, secretary of the IIF, singing The Rocky Road to Dublin was the local musical revelation of the evening. “Tubs” said that her rendition was so terrific it just had to be heard again when we can all finally get together in person.

Musician and songwriter Paddy Sherlock was also part of the festivities. He can set any venue or Zoom on fire. A former resident musician at the "The Coolin Irish Bar", a mythical left bank pub, he has been entertaining us in the “City of Light” for years. He has given so many wonderful performances that he is part of many of our great musical memories. Dusk, his new, exclusively original tracks album, produced by Brisa Roché for Black Ash Records, will be released 30 April 2021. “Like a Diamond” its pre-released single is already creating a real buzz:

“Tubs” said he hoped he would be back to see all the event’s stars performing in Paris when regulations permitted. He has often risen to the “Parisian occasion” at the side of “The Great Paul Lynch,” as he called him on his 5 March RTE Radio 1 show. “Tubs” already emceed at the Paris Goal charity balls Lynch organized on several occasions.

At one of the balls, “Tubs” played his role of master of ceremonies to the hilt, continuing the post ball festivities, to be one of the last persons standing, in a mythical Parisian Irish pub at dawn. (Some Irish pubs stay open until 5 am in normal circumstances).

Along with the fabulous music and dance acts, Michele Moran’s brilliant reading of a children’s story was wonderfully funny.

Mary Murray’s “Mrs Gibney’s” sketches had us in stitches. “Mrs. Gibney” remarked that the Irish in France must be delighted to get rid of the “bises” (kissing on the cheeks) during the Covid period. She said she could never figure out how many and which cheek to start with when she was in Paris on holidays. She hit the nail on the head; many Irish living in France are delighted the salutary kissing ritual has been suspended. Even after many years, many of us still get it wrong.

But then Ardal O'Hanlon, in Father Dougal McGuire's attire, pointed out at the end of his sketch that the Irish in France were a pack of eejits and especially Paul Lynch himself!

The craic really brought me back home. It seems the more an Irish person insults you, the more they like you. O'Hanlon is a great friend of Lynch, who has clocked up years of voluntary work for the Paris GAA and Irish charities in France, along with his current voluntary role at the helm of Irish in France. His initiatives over the years attracted many special Irish guests to France, spreading craic and relief to so many. The 2021 SPD’s celebrations continued in the same spirit.

There were smiles all around from the IIF members and friends, and even if everyone was at home, in their own living room, the event definitely brought us all closer together.

[1] The IIF receives funding from the Emigrant Support Programme administered by the Irish Department of Foreign Affairs and is also strongly supported by the Irish Embassy in Paris.