IrishCentral Contributor Patricia Killeen catches up with Maureen O'Donoghue and Jordan Kay who together form the musical duo Saelkie Folk. 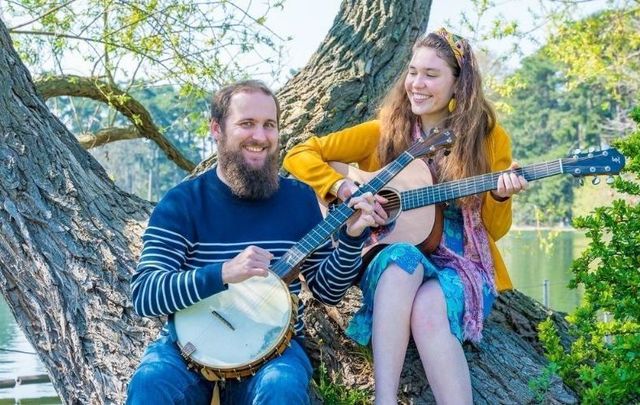 Maureen O'Donoghue lives in Paris and sings and plays guitar in a duo with Scotsman Jordan Kay. I attended one of their recent gigs in “La Cave Café”, Paris 75018. That night, the terrific music gave me goosebumps, as did their two folk fairy tales!

In the summer of 1982, three young French sisters, Michèle, Catherine, and Maryannick Drapier went on holiday to Ireland. They cycled around Connemara, bumped into Irish lads in Galway, and went for a drink with them.

16-year-old Conor gave Michèle a paper simply marked 'Conor, Claremorris' in case she might ever pass through the town. The sisters cycled through Claremorris later on their trip and Michèle asked a man in the street 'do you know Conor?' and he replied 'yes sure, that's his house!' She knocked on his door, love was in the air, and they later spent a year together in Dublin. Conor followed Michèle back to Paris in 1984.

Catherine and Maryannick also loved Ireland and returned a few times ultimately meeting their own Irish men! Maryannick met John Murray from Armagh and they moved to Belfast. Catherine met Padraig Kelleher from Cork. She sings and plays the guitar and he plays the flute and they now live in Brittany.

It seemed musicality, romance, and geography had aligned. Maureen’s father Conor plays the Congas (Cuban percussions) and her mother Michèle sings and plays American folk and Irish ballads on the guitar.

Maureen was immersed in music from the cradle; her mother constantly sang to her. Her maternal granny played the piano in a jazz band and composed family songs with her progeny, which they sang at Christmas. Maureen sang with her mother and two aunts ever since she can remember, often singing in harmony for the pure fun.

As a teenager, Maureen played in several rock bands, as lead singer and drummer. They composed their own songs and music. However, Maureen’s personal background was always Irish traditional and folk music.

Maureen, now 24, graduated from the Sorbonne in April 2021 with a Masters in Cultural Management in Trilingual Communications. In September, she was part of the production team working on “Seán Ó Riada,” a documentary by Táin Media production for TG4. She organised the production for the filming that took place in Paris.

Looking back at how she started out on the Parisian traditional/folk scene, she told me that in January 2020 she started a three-month stint working part-time in The Irishman pub in Paris 75013.

“I loved meeting the Irish community in Paris. I met members of the Irish in France (IIF) association there.” She's now the secretary of the IIF.

Maureen’s plan was to settle in Belfast after completing her masters’ degree internship which was due to start March 2020…"However, Lockdown crushed my plans and dreams. I was later accepted for an internship in the Centre Culturel Irlandais!” Covid’s impact on the trajectory of Maureen’s life turned into a positive turning point.

Then in January 2021, Maureen met her future musical partner, Jordan Kay, at a jam session in a friend's Parisian pad. That night, Jordan played the banjo and she played guitar. Jordan was looking for a singer for his band but when he accompanied one of Maureen’s acapella songs on the bodhran, people were blown away. The duo decided to start their own project.

Jordan is Scottish and grew up near Glasgow. He was a drummer in a heavy metal band In his teens, then took up the bodhran and moved into traditional and folk music. At 23, he received a 5-string banjo for Christmas, which he couldn’t put down. He came to Paris three years ago to see Notre Dame. He fell under the spell of the city and decided to settle, where as well as being a musician, he teaches Bodhran, 5-string banjo, and the autoharp.

The Irish/Scottish duo quickly became a hit and named their duo “Saelkie Folk”. Selkies, in Scottish, are seals. Scottish and Irish legends, tell of those seals swimming around remote waters off Ireland and Scotland. Selkies turn into humans once on land and these creatures of the sea were sometimes forced to marry and to live on land. The only way their partners could prevent them from returning to the sea was to steal and hide their sealskins. However, seals belong in the sea and always end up finding their way back.

Maureen and Jordan explained, “Our instruments are our sealskins, the songs are our ocean. An ever-expanding ocean as we’re constantly working on new material, and widening our repertoire.”

Maureen and Jordan hope to record an album later and are enjoying gigging in Paris and Brittany, where the musical tradition and identity is still very strong. They’ll also perform at folk, traditional and bluegrass festivals as their music incorporates influences of the three styles and look forward to composing their own material further down the road. They’re also looking forward to touring in Ireland and when “Saelkie Folk” have a gig in Mayo, a magical musical circle will be complete!