Paddy Sherlock’s new album, Dusk, is album of the month

Paris-based, Irish musician Paddy Sherlock’s new album Dusk will be the album of the month in May, on FIP Radio and is currently “album of the week” in Rolling Stone magazine! 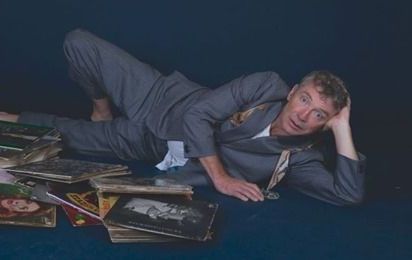 They say if you can make it in New York, you can make it anywhere. I believe Paris is just as tough an arena for artists and performers. However, the number of Irish who continue to make it to the very top in the “City of Light” and France is absolutely amazing when you think of the statistics.

Irish emigration to France has always been on a much smaller scale to that of Irish migration to English-speaking countries. The Irish-born population in France is estimated to be somewhere between 20,000 and 24,000. In the Hexagon with its over 67 million inhabitants, (11 million living in Paris), it is incredible to see so many French-based Irish names pop up so regularly in the French, Irish and US media - but believe me, they do!

The current Irish toast of the Parisian town is Paddy Sherlock - dynamic frontman, actor, singer, songwriter, and trombone hero. He has been entertaining us in the “City of Light” for the past 30 years where he lives and enjoys a successful career.

Outside of Covid times, he also goes home a couple of times a month to play in various venues in Ireland, with regular gigs in Dalkey, (“Benito's Dalkey” and "Finnegan's of Dalkey") and he also performs at the main Irish musical festivals. A reviewer described him as, “one of Ireland's coolest and most original artists. The one that got away to Paris...” He was right because although Paddy loves Ireland, Paris has become his home.

In spring 2021, Paddy is like a phoenix soaring over the shutdown city of Paris! Dusk, his new, exclusively original tracks album, produced by Brisa Roché for Black Ash Records, (release date 29 April 2021), is taking the city by storm. Like a Diamond its pre-released single is already creating a real buzz:

Dusk has been selected as album of the month, for May, on FIP radio (France Inter Paris – “a continental radio gem”). FIP described Paddy as having "the authenticity of Tom Waits mixed with the extreme sweetness of Chet Baker".

Dusk is also “album of the week” in the current issue of Rolling Stone magazine France, where Paddy’s name features on the front cover.

It certainly seems like more of a fabulous sunrise than an eponymous Dusk for Paddy’s eighth and latest album.

I had the pleasure of interviewing Paddy for the Turning Points show for World Radio Paris last month. He sang two of his original songs from Dusk as well as chatting about his life and music during the 26’ interview:

We chatted about how he went from teaching and busking in Paris to becoming a successful artist. He recounted how he had some lucky breaks along the way. However, he certainly did not leave his fate to luck and as one of the hardest working showmen, I know, he rolled up his sleeves and generated his own good fortune.

With many strings to his guitar, he was also the first Irish man to play Estragon, in Waiting for Godot, in French! People wondered, “how would this singing, dancing, flamboyant and very Irish musician shape up in a serious and complex role revolving around wordplay in a French text” (albeit written by Samuel  Beckett, another Irish man who made Paris his home). The play, directed by Jean-Marie Russo, ran longer than planned at the Theatre le Proscenium, and was a huge success!

Many of the “Irish in France” have great musical memories of Paddy at The Coolin Irish bar, where he was a resident musician for years. The Coolin was a highly popular mythical left bank pub that unfortunately closed down.

We are all looking forward to hearing Paddy play again as soon as cultural venues reopen, which might be the end of May in Paris, (fingers crossed). Perhaps he might do a gig at the mythical, refurbished "Pub Saint Germain", now owned by the Irish "O’Sullivans pub" group, where he played just before the March 2020 lockdown. Also looking forward to welcoming him back to the second “Lisdoonvarna-Paris”, Franco-Irish ball. In 2019 at the first event, he set the “CentQuatre-Paris” on fire!

I take my hat off to Paddy, yet another Irish person who’s made it Paris, which in my book means they could make it anywhere. I’ll finish with the title of another of his own original songs. Written in French, and sung with Brisa Roché, it was used in the soundtrack of the Hollywood movie "Behaving Badly".