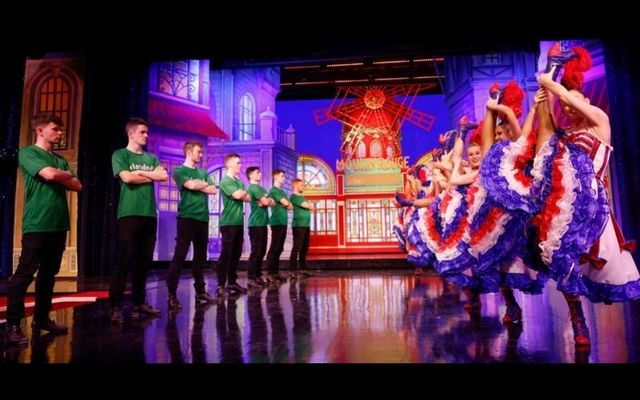 Cairde, the Irish dance group of seven lads, has hit the cobbled pavements of Paris with a thunderous bang of Irish dance shoes!

They’re receiving a terrific reception from Parisians and tourists at flashmobs, with the Eiffel Tower and Paris Opera House as backdrops.

Some people are discovering Irish dancing for the very first time, but on Parisian boulevards!

WATCH: Here’s a behind the scenes glimpse from our shoot this morning with @_cairde 🕺 These talented dancers are spreading some ‘green’ cheer across Paris today, in advance of Saturday’s @SixNationsRugby match ☘️ #GreenButton pic.twitter.com/ny7GnyFtEF

In an interview for World Radio Paris, Ronan, one of the founding members and Cairde dancer, said that Ireland and the Irish appeal to the French as they sense it's a country with a culture rich in music and culture as their own.

The two cultures have now been further united in a fusion of French can-can meets Irish dance high kicks in a friendly “battle” at the renowned Moulin Rouge cabaret in Pigalle.

Amid the rustling of colorful can-can skirts and petticoats and Irish reel shoes racketing, with such a level of excellence on both sides, it was hard to declare a winner.

The seven lads, who now live together, are the very best in the Irish dancing league and previously competed with and against each other, winning every possible Irish dancing championship between them.

However, the Moulin Rouge dancers, two of whom we know, Irish sisters Claudine and Isabelle van den Bergh Cooke, explained the can-can is extremely acrobatic with high kicks, jumps, cartwheels, and splits and is very fast-paced.

Both sides were kept on their toes!

WATCH: a ‘dance-off’ in the famous @moulinrouge between @_cairde and seven Can-Can dancers 💃 ahead of tomorrow's @SixNationsRugby match in Paris ... Ireland v France! ☘️ pic.twitter.com/VV46RPzoYy

Back home in Ireland, with dancing classes and competitions canceled during lockdown and Covid restrictions, the seven lads had to find new ways to stay fit.

They also needed an outlet for their creativity and decided to practice and perform TikTok videos while showcasing spectacular Irish landscapes as backdrops.

They now live in a house in Liscannor, a magnificent coastal village on the west coast of County Clare, which has a beautiful seaside view, that has also been featured in many of their videos. It seems Christy Moore’s legendry song Lisdoonvarna was right - “If it's music [and dance] you want, You should go to Clare”!

It was in Clare that Cairde originally got together in 2017, at the Fleadh Cheoil in Ennis, but it was in the summer of 2020, when Ireland was beginning to recover from the first wave of COVID-19, that they skyrocketed.

Cairde has innovated ways to put a modern twist on traditional Irish dancing and set many of their choreographies to modern beats and songs. They hoped to have 1,000 followers after their first month on the TikTok platform, but fell short, having only 300 followers, mainly family and friends at the end of the month.

However, after they released a choreography to the Taylor Swift song “Love Story," their initial ambition to reach followers on 1,000 was realized a hundred-fold, making it to 100,000 followers overnight.

The video has now been viewed more than 5.5 million times!

They haven’t looked back since and today have more than 2.5 million followers. One of their recent TikTok videos was viewed by more than 80 million people!

Ronan said they could never have imagined back in 2017 that they would become such a sensation and be tourism and cultural ambassadors for Ireland.

The 80,000 people attending the France v Ireland rugby match at the Stade de France on February 12 are in for a treat as Cairde will perform a mash-up of their most popular TikToks on the pitch at halftime.

We are SO excited to be performing the half time show at the Ireland V France Six Nations game in the Stade de France tomorrow! 🏉
The audience of over 80,000 will be our biggest yet.
Let’s do this lads💪🏻@TourismIreland @VacancesIrlande @StadeFrance

This match is widely touted as the defining game of the 2022 Six Nations. But will it be like the first Riverdance performance, during the interval of the 1994 Eurovision Song Contest? Nobody can remember the songs, but that first Riverdance show has gone down in history.

After Paris, Cairde will be heading stateside and will cross the Atlantic to Washington DC. They have been invited to the White House to perform for President Joe Biden at the Ireland National performance gala on St. Patrick’s Day.

Ronan mentioned they were “incredibly grateful for this opportunity and it will be a huge honour to dance for the President of the United States and we hope that President Biden, who has family in Ballina, will really enjoy our performance”.

This year's White House appearance comes after Cairde performed live on Good Morning America in the US from the Cliffs of Moher last year on St. Patrick's Day. The lads now enjoy a large and loyal US following.

But back in Paris, after Cairde's exciting, whirlwind visit, we will be brushing up on our Irish dancing steps and will be enjoying craic, music and events at the Centre Culturel Irlandais (CCI) at the Saint Patrick’s festival between 10 and 20 March.